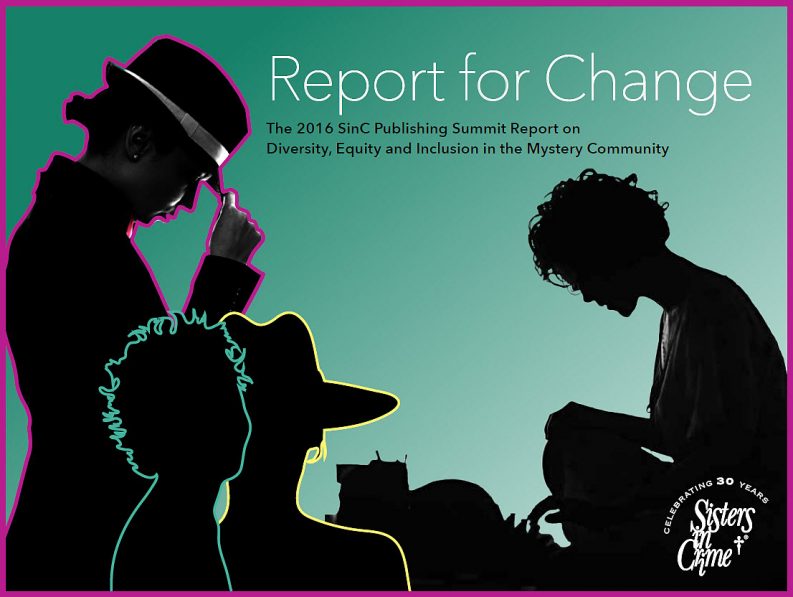 A writers’ support organization with 50 chapters in the US and Canada looks inward to discover who they are. They’re exploring the difficult mystery of diversity in today’s publishing industry. ‘To Deepen Our Understanding’

Sisters in Crime has released its new Report for Change, this year on the subject of “Diversity, Equity, and Inclusion in the Mystery Community.”

It’s the latest in nine years of “summit reports” created by and for the 30-year-old genre-based industry support group, Sisters in Crime. The group’s mission is to “Promote the ongoing advancement, recognition and professional development of women crime writers.” Past topics of these reports have included independent bookstores, readers’ discovery of mystery books, distributors and wholesalers, and more.

Just out on Monday (August 9), the new report is a 54-page document that’s as serious as murder. As was evident in the articulate focus of the Nielsen Romance Book Summit at the Romance Writers of America‘s conference last month, the author corps has become an integral player now in the industry-wide self-examination underway, a search to discover who is making what content for which readership—and why.

The introduction’s opening paragraph sets up the sensitivities around the topics engaged when you begin talking diversity in any part of publishing, and especially, it seems, among publishers and writers:

“Becoming a successful writer is hard work. For writers who belong to the groups often referred to as “diverse,” there are factors that make it even harder. But talking about diversity can feel like walking across a minefield. Some people show angry resistance to having the conversation at all. Even those who see the need for change can be stuck because of fear: fear of getting it wrong; fear of seeming to pander; fear of being criticized; fear of making things worse.”

And how quickly those fears can be understood when you consider the range of what’s at hand when trying to get into these issues. There are “writers of color” (WOC), “writers with disabilities” (WWD), and lesbian, gay, bi, transgender writers (LGBTW), the needs and interests of whom must all to be taken into account—and in many cases, of course, these folks won’t remotely agree with each other on what correctly represents them, just as is true in the mystery genre’s majority caucasian female writing sector.

From a survey sent to 3,400 Sisters in Crime members in March, some demographic results have been placed alongside US Census Bureau data for comparison.

Among the first highlights:

‘I Wish We Could Stop the Coded Talk’

The survey report from the organization goes deepest in searching for emotional and situational context.

“We’re sick of ‘raising awareness’ over and over again. The disparity in our mystery community should be a point of shame, not something that people forget until it’s re-raised.”Sisters in Crime 'Report for Change' comment

As soon as you reach the acknowledgements and appendices, you find not only useful short biographies on many of the voices contributing to the survey, but also resources for writers in each category of minority from the survey. There also are listings of various quantifying/monitoring efforts including the VIDA Count made by Women in the Literary Arts, along with the Lee & Low Publishing Baseline Study that has helped animate so much discussion and inquiry into these issues this year.

Of special interest: study leadership member and criminal justice professor at the University of Albany-SUNY Frankie Y. Bailey has produced “Frankie’s List [of] Diverse Mystery Writers”. The next time somebody complains that they can’t seem to find the work of multiculturally diverse mystery authors, you might offer this to them. It includes South Asian British writers, Native American writers, Hispanic/Latino writers, and more.

‘Diversity Is Not Something Extra’

Led by a team of seven authors, the Sisters in Crime study won’t shock many folks. After all, not even under the darkest shade tree has Miss Marple ever seemed anything but white and middle class, a demographic look reflected in the mystery readership by a study from Nielsen.

But the value here is in talking about it, bringing the issues to consciousness and bringing the membership of this organization and others out of that shade and into the light of open discussion.

Imagine whole publishing companies doing this with their staffers. Some have done so or have made other efforts to break old patterns. “The Scheme” at Penguin Random House UK, for example, was originated last summer as an effort to find entry-level staffers who don’t have the common background profiles of experience and training for book-industry hires.

Still, when Lee & Low offered its data showing that 78 percent of the publishing industry’s workforce is female, there were surprised looks on some normally placid faces. When the numbers showed that 79 percent of that workforce is white, some of those faces were blushing.

In a handsome step that clearly took some discussion, the Sisters in Crime team decided to include men of color, as well as gay, bisexual and transgender men, for Bailey’s list of writers “because we believe the difficulties experienced by men in these groups are so similar to the difficulties of women as a group, that to exclude them would be to take a step away from our core values. We have included any author with at least one published mystery novel or three short stories.”

These are healthy, difficult conversations about the book industry at a time when the US electoral season has revealed that political correctness can hide as many truths as it seeks to protect. One unnamed writer quoted in the survey captures the general tone of things when he or she says: “I wish we could stop the coded talk about ‘fresh perspectives’ and ‘tapping into new voices’ and instead just say out loud: ‘We need more black people.'”

Here’s a practical point that arises from this exercise: the overall loss of the book tour for an author means that writers of color, just like majority writers, no longer have the same chances to meet consumers in person and help develop readership by getting that “friendly face attached to an obviously minority name.”

As author Naomi Hirahara is quoted saying in the report, “Diversity is not something extra. This is what America looks like and crime writing needs to reflect it.”

And in a concluding bit of commentary, the survey quotes some of its respondents not in the mainstream:

In a statement about the survey’s release, Sisters in Crime President Leslie Budewitz writes: “Our goal with this report is to provide data, experience, and recommendations that everyone in the crime fiction community—writers, publishers, agents, booksellers, librarians, and organizations—can use to deepen our understanding and expand opportunities.”

A summary of the report is to be part of the program at the Bouchercon 2016 conference in September in New Orleans. And the full report is available online at the Sisters in Crime site.