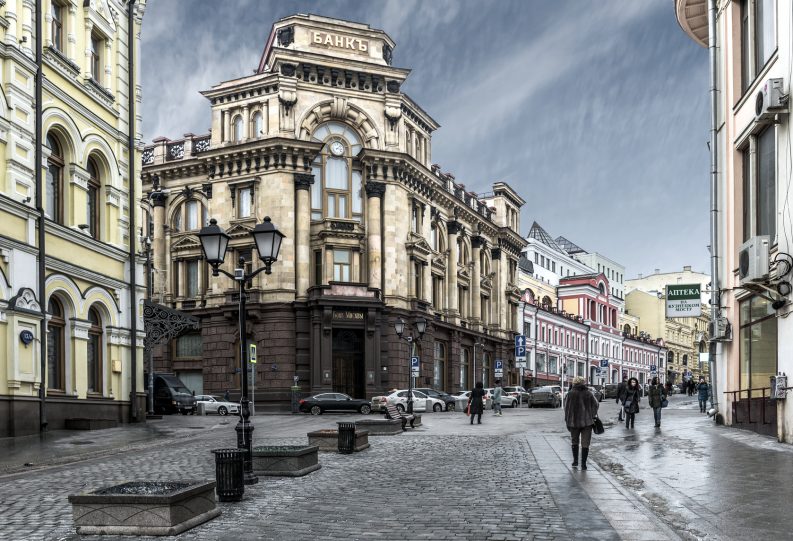 Cultural ministry properties can offer favorable rent rates to bookshops on their premises, but it remains to be seen how much that can help with a dearth of Russian bookstores. Near the Bank of Moscow on Kuznetsky. Image – iStockphoto: Sachkv

Russia’s leading publishers and booksellers say they welcome the latest initiative of the Russian Parliament, the State Duma, on the establishment of bookstores in public facilities operated  by the Russian Ministry of Culture.

The development has been put into place by an amendment to the federal law named “On Protection of Competition.” That legislation allows libraries, museums, theaters, and other cultural facilities to offer space to Russian bookstores on favorable terms.

Oleg Novikov, head of Eksmo-AST, Russia’s leading publisher, tells Publishing Perspectives that the new initiative is important in helping the domestic bookselling industry stay afloat amid the consequences of the financial crisis in Russia. That economic situation has led to sizable hikes in rent for many bookstores, precipitating bankruptcies.

According to data Eksmo’s data, there are currently some 2,000 bookstores in Russia, a serious decline since 2009. “This is a very important initiative for the Russian bookselling industry.

“The introduction of preferential lease terms may well be useful for the majority of Russian booksellers, and will help to increase the current number of bookstores in Russia by one-and-a-half to two times over present figures.

“At last year’s meeting with book publishers, President Vladimir Putin said that the government wasn’t ready to provide tax incentives to domestic booksellers, because of the crisis.

“But the situation has significantly improved in recent months.”

Novikov says he doesn’t think of this move as a one-off gesture but a measure to be re-approved on a regular basis by authorities for the support of the domestic publishers and booksellers.

Marina Kameneva, director of Moskva, one of Russia’s leading book chains, is more cautious, saying that the provided lease incentives will unlikely result in a massive opening of bookstores in Moscow libraries or museums.

“Every structure must have its functionality.” Kameneva says. “The new bill is good for those Russian regions that have lots of libraries and have also experienced a shortage of bookstores. But that concept isn’t fully relevant for Moscow and other large cities that have enough bookstores and libraries.

“People who prefer the specialization of bookstores may not want to go into libraries to find them.”

Russian publishers are now in talks with the Russian Ministry of Economic Development on the subject of needed subsidies to open new bookstores. The amounts of such subsidies haven’t been announced.