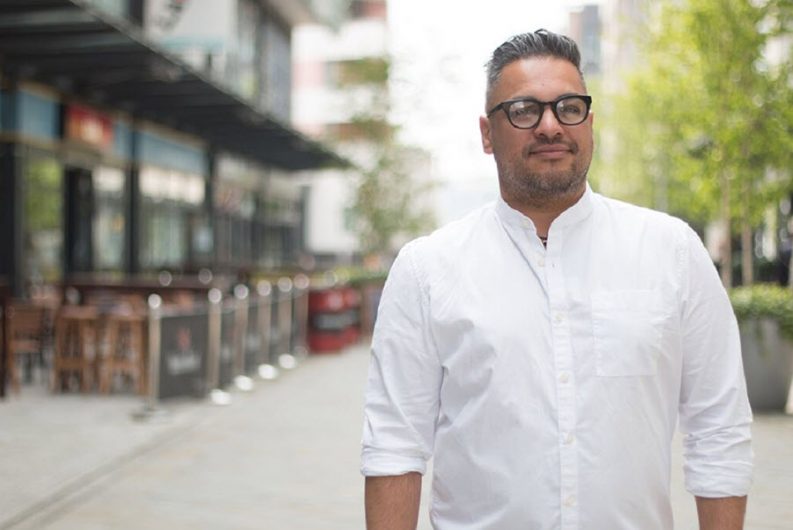 ‘The pressure on books and the industry is huge,’ says author-campaigner Nikesh Shukla, a rising star in diversity awareness. ‘Once they can get wi-fi on all public transport, that’s probably it for books.’ The Rising Stars program, now in its sixth year, is a project conceived and run by The Bookseller in association with Frankfurt Book Fair. It recognizes emerging leadership in the UK publishing industry. Publishing Perspectives is glad to bring you a series of interviews with some of the 40 members of the class of 2016. And we’re particularly pleased to open our series today a dependably articulate fellow familiar to many of us in the business, Nikesh Shukla. — Porter Anderson

Two years ago, novelist and campaigner Nikesh Shukla sent a lamb chop into space to promote his novel, Meatspace. His career since then seems to have followed a similar trajectory, if thankfully without the plunge into a threshing machine that the unfortunate chop eventually suffered.

“Are we trying to attract all the readers we possibly can or are we publishing in our own image for ourselves as a reader only?”Nikesh Shukla

That’s not the only launch he’s been involved in. Earlier this year, working alongside Media Diversified and author Sunny Singh, Shukla founded the Jhalak Prize for book of the year by a writer of color.

He also announced the publication through crowdfunding publisher Unbound of the The Good Immigrant, an exploration by an emerging generation of “BAME” writers of what it means to be black, Asian and/or minority ethnic in Britain today. The book has already received pledges of nearly double what was required for publication, and now is in production.

A tireless, impassioned and persuasive campaigner for a more diverse publishing industry, Shukla is still busy as a writer. He’s working on a new novel–his third–and on adapting Meatspace for television.

‘A Readership Hungry To Read Writers of Color’

Publishing Perspectives: How long have you been working in publishing as an author and, increasingly, campaigner? How and why did you begin?

Nikesh Shukla: I worked at a book charity called Book Trust for about five years. That was my first job in publishing. During that time, I got my first book deal. I managed the Web site and social media and worked on some excellent campaigns.

“You can’t beat being made fun of by a national treasure on a topical panel show.”Nikesh Shukla

See? I was an average rapper once. And I was always a storyteller.

So I’ve always, in my adult life certainly, written. Since I left university, I’ve only worked in charities and nonprofit organisations.

Currently, I run a magazine for young people in Bristol where we give out six-month paid jobs to 18-to-24-year-olds looking for a start in the creative industries. It’s called Rife. And it’s really me putting my time and energy where my big mouth is.

For all the campaigning I’ve done around diversity and the need for more inclusion and representation in books and the arts, I’ve also been running this project, ensuring that I’m doing what I can to be that change as well as shout about it.

NS: Oh, man, I don’t think I could say all the campaign stuff I’ve done because that would imply we’re in a better place and things have changed. They are changing, slowly. And also there are heaps of other people working on these projects as well, who are more amazing than me.

“I hope in five years, we don’t need anyone to do any campaigning because we have equal and inclusive representation.”Nikesh Shukla

I think, aside from the successful crowdfunding of The Good Immigrant, I reckon the time we sent the lamb chop into space to promote my novel Meatspace, and the ensuing video going viral—that was probably my biggest achievement. You can’t beat being made fun of by a national treasure on a topical panel show.

NS: I’m persistent. I mean all my passion and want for change and all the time I give and all the stuff I do is probably because, like my mum and dad who instilled this in me, I’m persistent. I think it’s probably because my mum once told me to have a quiet ambition rather than a loud one. And as long as you were quietly ambitious with no expectation but willing to see it through, you could never say you were part of the problem.

NS:  I care too much about what people think, I guess.

PP: Where do you want your career, and your campaigning, to be in five years?

” If you can’t find the people who want to read diverse voices? I made it easy for you.”Nikesh Shukla

That way I can just write to my heart’s content not worrying that my work needs to get past gatekeepers who might not be attuned to my reference points as a person of color, not worrying that I need to divide the precious writing time I have outside of my day job and parent duties between campaigning, admin, and writing, not worrying that when people talk to me about markets and readerships, they only mean a select market and a select readership.

‘How Timely and Needed’

PP: What’s the thing publishing as an industry needs to focus on most today?

NS: Are we trying to attract all the readers we possibly can or are we publishing in our own image for ourselves as a reader only? The pressure on books and the industry is huge and there are competitive forces everywhere from Pokémon Go to Netflix to the pub, and once they can get wifi on all public transport, that’s probably it for books.

“There is this insinuation that BAME people don’t read, when the reality is, the industry doesn’t know how to approach them. We’re just told they don’t exist.”Nikesh Shukla

So, if readerships can potentially diminish, do we have all the readers we can possibly have? Are they being recruited from early on? Are they being nurtured? Are their lives being reflected? Are they being shown alternative worlds and cultures? Is the only reflection a mono-cultural one?

The reader is king/queen/overlord, etc. And while writers and publishers have no social case to reflect and cater to every possible reader, they do have an economic one.

PP: Your forthcoming book, The Good Immigrant, brings together 15 emerging British black, Asian and minority ethnic writers to discuss the narrative around immigration in the UK today. It’s published by Unbound using their crowdfunding model. Would that book have been published otherwise, do you think, by a “mainstream’ publisher?” And what role do you think such innovative business models can play in increasing diversity in publishing? NS: I chose Unbound to make a point. I hope they don’t feel used in me admitting this. Sorry guys, you’re ace.

I was interested in the crowdfunding model because I wanted to show the potential readership out there. Especially in the diversity conversation, when people talk about the business case, there is this insinuation that BAME people don’t read, when the reality is, the industry doesn’t know how to approach them. We’re just told they don’t exist.

So I wanted to make a point. I knew, choosing the writers I did, using the crowdfunding platform, with the topic being a constantly timely one, that it would get funded fast. And it would have been funded quickly even without JK Rowling’s support. We’re nearly 200-percent funded.

I wanted to show there was a readership out there hungry to read writers of color. Six-hundred-fifty people pre-ordered that book before a word of it was even written. That’s how timely and needed it was.