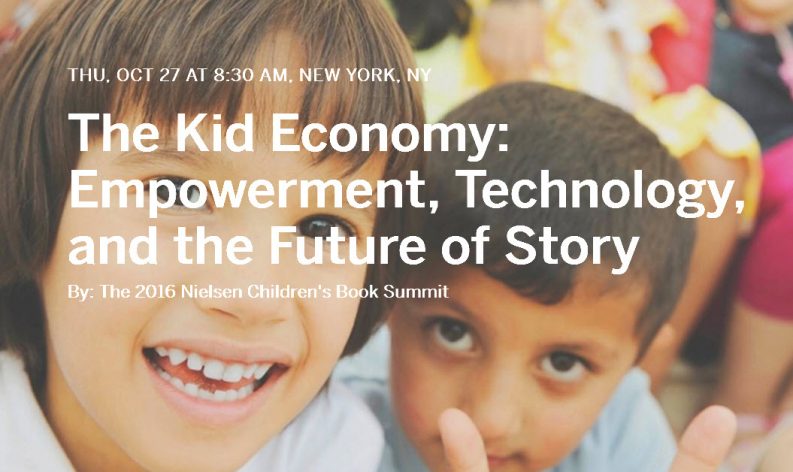 From ‘the push and pull’ of screen time in the home to ‘the we, more, and now generation’ of millennial parents, Nielsen’s conference on children’s books promises to interweave data and discussion. Context: ‘The Kid Economy’ and Data That Reveals It

Riding high on the success of its inaugural Romance Book Summit in July, Nielsen has announced this year’s Children’s Book Summit for October 27 at New York City’s well-equipped Forum at Convene conference center.

Nielsen Book’s New Business Director Kristen McLean is directing the conference once again, this year with co-chair Kat Meyer of the Book Industry Study Group (BISG), and formerly with Publishers Weekly and Tools of Change.

As they did in the San Diego romance event, McLean and Meyer are working with a newly devised approach to data-driven presentation. They’re leading with discussion and debate, issues rather than numbers.

“Our original impulse for this,” McLean says, “came out of our children’s consumer research program, which we started in 2010.” The research from the program was so robust, she says, that it made sense to start bringing together various players in the sector to examine not only what was being produced in terms of children’s consumer research “but also what we had in the larger Nielsen universe. The decision was really to move this more toward a thought-leadership approach.

“We’ve worked to make these events less about charts and more about ideas and conversations and bringing more voices into the room.”Kristen McLean, Nielsen Book

“The head of Nielsen Entertainment, Howard Applebaum, is very growth-oriented, and always really interested in anything that creates excitement and synergy between our groups, in addition to the books group—the games group, the sports group, home entertainment, music. So he’s been an early supporter of these summits from the beginning.

“And in the children’s space, it’s an increasingly cross-platform environment. Whether it’s publishers or game companies. or TV and children’s media companies, if you want to do something exciting in children’s you have to address all of that.”

This is a key message of the context McLean and her team are rolling out: publishers need to think past books and on to cross-platform potentials for consumer engagement.

“This year, we hired Kat [Meyer] to join us on our conferences, and together we’ve worked to make these events less about charts and more about ideas and conversations and bringing more voices into the room. We really see our data as a jumping-off point for the conversation, which we want to facilitate among many different types of clients we serve in lots of different areas.”

The result is a more integrated tack, with Nielsen’s trademark research data expressed in and around a theme.

Parents and Children Onstage With Data

“We’re starting to think about where does digital fit?—in the classroom, in family life? I think we’re over the initial freakout over digital.”Kristen McLean, Nielsen Book

“The Kid Economy: Empowerment, Technology, and the Future of Story” is the theme of October’s event, and seasoned conference-goers will quickly see from the initial list of sessions how McLean and Meyer are entwining the program’s delivery of data and interpretation.

For example, an initial market overview titled “Books in the Age of Kid Empowerment” is followed by a conversation—speakers are to be announced shortly—on “How Books and Digital Fit Together in the Day-to-Day Lives of Kids.”

After a look at the active presence of Google, Amazon and other major media players in the kids’ space, one of the Children’s Book Summit series’ most popular features, a live focus group, will follow: In “Balancing Act—The Give and Take Over Devices in the Household,” a panel of parents and young people will be brought to the stage to describe how “screen time” and other digitally enabled activities for children are being negotiated in the home. “It feels inevitable,” McLean says, “that digital has a role in most families. Some are more rigid than others about how they control it. But this part of the program is very much about the push and pull of digital inside families. We’re starting to think about where does digital fit?—in the classroom, in family life? I think we’re over the initial freakout over digital,” she says, “but we still find a lot of guilt about it” among parents who feel they’ve allowed their children too much access to digital access.

A pivotal keynote address for the day is titled “Gaining Market Share in a World of Endless Content,” aimed at one of the most vexing elements of the digital dynamic: the “Wall of Content” that competes with books and reading in a connected world.

“I’m trying to plant some seeds,” McLean says, “and be sure that everybody will leave that room with, at a minimum, one or two ideas that they’re excited about.”

‘The Rise of Active Nonfiction’

Kids as makers: “What that really points to is an opportunity to create content that helps kids make things in the real world.”Kristen McLean, Nielsen Book

Among the most compelling of the ideas at play is one encapsulated in a business-model session called “Kids as Makers: The Business Case for Empowering Real-World Creation.”

“Compare this with the rise of what I call ‘active nonfiction’ books for kids—coding books, activity books, drawing books, building books. What that really points to is an opportunity to create content that helps kids make things in the real world.” One of Nielsen’s slides in its webinar on the millennial consumer includes a breakdown of “the younger brain” that guides these parents. Image: Nielsen Global Millennial Webinar

“Millennial parents are really wanting to connect: there’s a major opportunity here for cause marketing and publishing.”Kristen McLean, Nielsen Book

One of the most telling sessions may be a late-day look at “The We, More, and Now Generation: Understanding What Drives Millennial Parents.”

The session’s title draws from one of Nielsen’s global webinar presentations in which researchers estimated that 24 percent of the world population stands in the millennial generational demographic.

Described as that “we, more, and now generation” for that webinar, millennials are said to value convenience, a healthy lifestyle, control, authenticity, connectivity, verbal-social skills, and multitasking.

They may not be so likely to worry if their kids seem to be doing many things at once, for example, because, per the research Nielsen offers, millennials tend to engage in social media and/or browse the Net while watching video programming, themselves.

Millennials are fond of renting or sharing products or services, too, rather than being as focused on owning, as Baby Boomers are said to be.

And what McLean and Meyer are doing in the Children’s Book Summit is examining where the trends of millennial parents might open up chances for publishers to fill needs and desires. “Millennials will pay more for organic, for brands that have a social cause, for brands that reflect the values they hold,” says McLean. “Millennial parents are really wanting to connect: there’s a major opportunity here for cause marketing and publishing. That’s what we’re going to be talking about.”

And inclusion is one of the key themes of the day, as captured in a session called “Designing for Digital Accessibility: Why Everyone Wins when Everyone Can Play.”

Attendees will be given a free copy of Nielsen’s 2016 Children’s Book Business Review, and will find that sponsors of the day include Ingram Publisher Services, Foreword, and NetGalley.

Registration for Nielsen’s Children’s Book Summit is open, with special breaks for publishers sending six- or 10-employee groups. In the case of the 10-person group, the special pricing ends September 16.