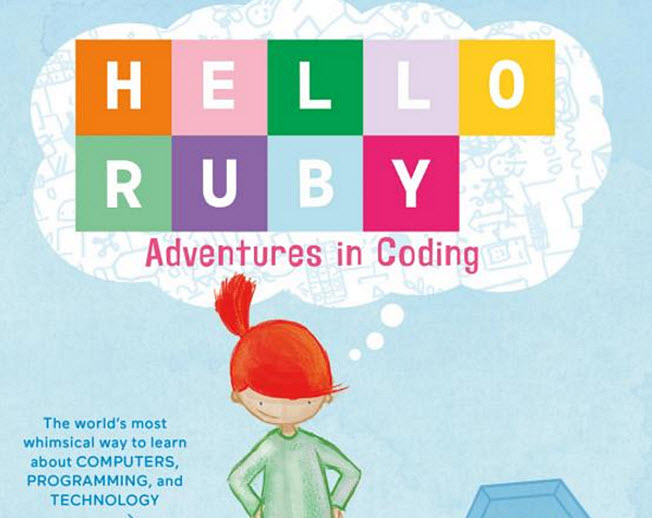 ‘Programming is a mean of self-expression, just like Lego and crayons,’ according to Finland’s Linda Liukas on her international children’s book hit, ‘Hello Ruby.’ An excerpt of the artwork from Linda Liukas’ ‘Hello Ruby: Adventures in Coding’ from Macmillan/Feiwel and Friends. The book is designed by Eileen Savage.

‘I Worked for Four Years on Hello Ruby‘

When Helsinki’s Linda Liukas decided to write a book to teach kids the basics of coding and programming, the co-founder of Rail Girls went to Kickstarter in the spring of 2014 to find funding. As she said in her pitch video, “I want to write a book for my future kids, about the magical world of technology.”

The pitch worked. Although her goal had been to raise $10,000, she ultimately raised $380,000, making Hello Ruby the best-funded children’s book in Kickstarter history. Here is her campaign page.

Nevertheless, as she tells Daniel James Coll at hybe.com, her crowdfunding effort was the end of a long period of work: Linda LIukas in her Kickstarter video

“Kickstarter is the end, it’s not the beginning.

“You need to have a very dedicated community of people who trust you and believe in what you are doing, to rally around you and your work.

“Running a successful crowdfunding campaign is a lot of work…

“In reality, I worked for four years on Hello Ruby before shipping it, and at least half a year on the Kickstarter campaign,” a campaign however, that made her dream possible.”

As Coll writes, Liukas turned to crowdfunding only out of fear of the kind of reaction she’d get from what he describes as “over-cautious, cynical and conservative publishers; venture capitalists wary of risking their hard-earned cash on such an experimental niche, with no guaranteed potential for profit, in the already crowded and established children’s publishing field.” She’s quoted telling him, “If I had gone to a Finnish publisher and told them that I want to make, like, the world’s best pre-school series about programming for kids, they would have said, ‘Oh, Linda there is no market for this,’ and they would have been right; because in a land of 5 million people, there wouldn’t have been a market for a children’s book on technology.

And now, as reported by Good News From Finland, Liuka’s series has become a major success story in Japan, with the Japanese version topping the children’s book bestseller list on Amazon.jp for weeks.

As Liukas tells  Good News about the importance of her book for children, “Programming is a mean of self-expression, just like Lego and crayons,” says Liukas. “If we think JavaScript will be the lingua franca of the future, instead of only grammar classes we should be teaching our kids to write poetry.”

When asked “what’s next?” by Coll at Hybe, she replies:

“I definitely want to make mobile applications, and a summer school next year.I just look forward to having adventures with my little redhead sidekick in the future.”

The translation rights to Hello Ruby have been sold into more than 19 languages to date, according to the Good News report.