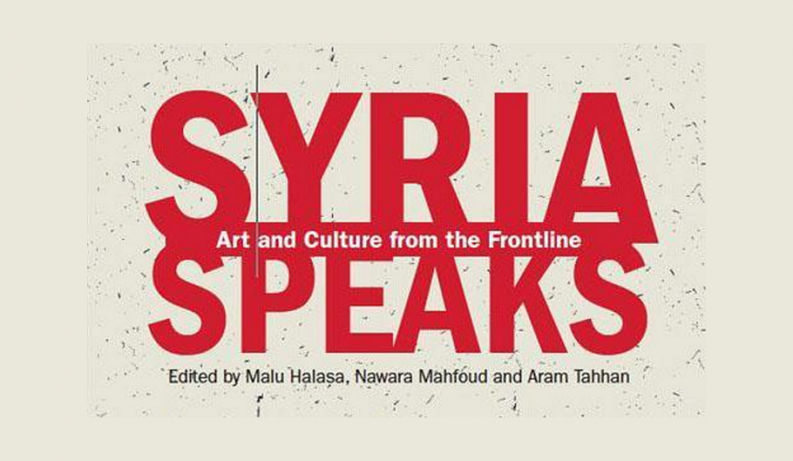 Warning of ‘simplistic messages of violence and horror’ in today’s political discourse, English PEN and associates assert ‘the freedom to read any book.’

Eglish PEN has added its condemnation to reports of the detention and questioning of a British Muslim newlywed who was spotted on a plane reading Syria Speaks: Art and Culture From the Frontline.

As described for Publishing Perspectives by Olivia Snaije , Syria Speaks is “a book filled chock-a-block with treasures: short stories by Samar Yazbeck and Khaled Khalifa, powerful and terrifying illustrations and digital prints by Khalil Younes and Sulafa Hijazi, posters from the anonymous Syrian artists’ collective, a letter from the jailed director of the Syrian Center for Media and Freedom of Expression, Mazen Darwish, and many other informative articles, fascinating artwork and writing. ”

As Sian Cain writes at The Guardian, “Faizah Shaheen, a psychotherapist in Leeds, was detained by police at Doncaster airport on 25 July, on her return from her honeymoon in Turkey. A Thomson Airways cabin-crew member had reported Shaheen on her outbound flight two weeks earlier, as she was reading the title Syria Speaks: Art and Culture from the Frontline.”

Liam O’Hare and Ted Jeory’s report at The Independent agree with Cain’s that South Yorkshire Police questioned her for 15 minutes. Their report quotes Shaheen as saying, “Ironically, a part of my job role is working on anti-radicalisation and assessing vulnerable young people with mental health problems are at risk of being radicalized. I said that to the police. I’m actually part of trying to fight radicalisation and breaking the stereotypes.”

Under the UK’s Terrorism Act’s Schedule 7, authorities can “stop, question and detain” people “whether or not [an officer] has grounds for suspecting” that person of wrongdoing. A spokesman for the police is quoted by The Independent saying, in part, “She was not arrested, she was held for 15 minutes and was subsequently released.”

Thomson Airways has offered a statement, carried by The Independent: “Our crew undergo general safety and security awareness training on a regular basis. As part of this they are encouraged to be vigilant and share any information or questions with the relevant authorities. We appreciate that in this instance Ms Shaheen may have felt that overcaution had been exercised. However, like all airlines, our crew are trained to report any concerns they may have as a precaution.“

The book, Syria Speaks, edited by Malu Halasa, Zaher Omareen, and Nawara Mahfoud, is published by Saqi Books as a collection of essays focused on, Cain writes, challenging the culture of violence in Syria.

English PEN’s Writers in Translation Programme supported the book’s preparation with a grant.

Jo Glanville, who directs English PEN, has issued this statement: “Thomson Airways should be highly embarrassed about this gross act of misjudgment. The current culture of anxiety around extremism now means that even our reading material has become grounds for suspicion of terrorist activity. The freedom to read any book, no matter the subject, is a fundamental cornerstone of our liberty. No one should ever be detained or questioned by the police on the basis of the literature they’re reading.

“Syria Speaks is one of the most remarkable books to have been published since the uprising in Syria in 2011. It gives an illuminating insight into Syrian culture, celebrating the undaunted spirit of the Syrian people. It’s highly ironic, and deeply disturbing, that possessing a work that showcases one of the few remaining areas of freedom for the Syrians, the creative space, should lead to the detention of a British Muslim citizen.” “Syria Speaks represents everything Saqi Books, as a Middle East interest publisher, has sought to champion over the years: it celebrates freedom of expression and creativity in the face of horror and regression. Syria Speaks won support from the Prince Claus Fund for Art and Culture in Amsterdam, CKU, the British Council, the Arts Council, English PEN and the Arab British Centre, among others.

“It received glowing reviews and endorsements from Brian Eno and AL Kennedy, who described it as ‘a wise, courageous, imaginative and beautiful response to all that is ugly in human behaviour.”

PEN also is providing various media with a response from the book’s co-editor, Zaher Omareen: “This despicable incident reflects the deep and widespread misunderstanding towards Syria today. It shows how far stereotypes influence our cities under the otherwise understandable security and terror concerns. Judging individuals and even taking measures against them based on their race, their looks, their language, or the printed words they carry is unacceptable and unjustifiable.

“It was enough to carry a book which includes the word ‘Syria’ in its title for its owner to be under suspicion as a potential terrorist. I would like to remind the people and the government that Syria must not be reduced to the politicised and power-constructed sound bites carrying simplistic messages of violence and horror. This systematic misrepresentation distorts the common humanistic meaning which we all hold against oppression and tyranny across the world. Syria is no exception. It is a country desperate to heal and find peace, in order to become more culturally enriched and enlightened than ever, thanks to its numerous artists and cultural thinkers who are represented in a modest sample in my seemingly notorious book, Syria Speaks. Syria is not an accusation. And we, the Syrians, must not be constantly under suspicion.”

I’m offering my book Syria Speaks for free to any one traveling abroad the UK 🙂 https://t.co/NUa7gCXI41