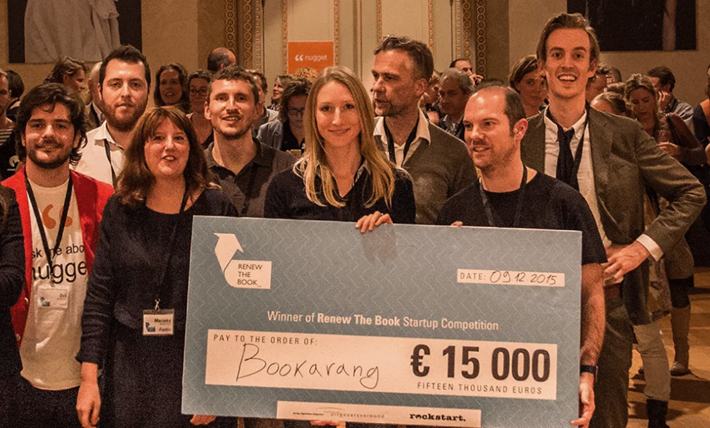 Accustomed to working together with booksellers on distribution, Dutch publishers, says one veteran observer, may be particularly suited to collaborative efforts in ‘renewing the book.’ Members of the winning startup team (Bookerang.com) and other participants in The Netherlands’ first Renew the Book program. Image: RenewTheBook.com

In our series with specialists (analysts, visionaries, and players) who will speak to issues in the seven pivotal publishing markets of Frankfurt Book Fair’s conference, we hear now from Wiet de Bruijn of The Netherlands. Publishing Perspectives last spoke with him in July on the topic of industry innovation. He’ll be speaking in the role of visionary at The Markets: Global Publishing Summit on October 18. We’re pleased to have this interview, which originally appeared in Buchreport.de. — Porter Anderson Known as a versatile serial entrepreneur, Wiet de Bruijn is CEO of VBK Publishers Group, the largest trade book publisher in The Netherlands. He’s also Chairman of the Dutch Publishers Association (GAU), and holds a masters’ degree in public administration from Harvard.

1. In 2015, the Dutch book market was the fastest-growing in Europe. “The Dutch market,” says de Bruijn, “saw a 3.5-percent jump in sales. And only Sweden’s people were rated as reading more per capita than The Netherlands’ readers. 3. The flexibility of the Dutch industry. “There’s great resilience in the Dutch industry,” de Bruijn says, “in overcoming challenges including the financial crisis, changes in customer behavior, and the progressive impact of the Internet.

“Our trade volume decreased by some 30 percent from 2008 to 2014, but the industry has proven agile enough to overcome these challenges, pursuing the highest standards through well-written literature. This can only happen thanks to the unmatched quality and talent of our authors and the people in the industry.”

What could other markets learn from your market?

Wiet de Bruijn: The Dutch market has been focusing on innovation over the last years.

Because of the decline of the Dutch market, publishers had to be creative and innovative. A variety of initiatives were started. The Dutch Publishing Association, for instance, launched Renew the Book, a competition in which startups in the book industry from all over the world could participate. Five teams were selected last year for an accelerator program in Amsterdam.

Other examples of innovation here include a publishing house and university working on computer assists for authors and a couple of online book clubs and subscription services, along with an online data center for publishers and booksellers.

Where, in your opinion, are the weak points of your market?

WdB: A weak point of the Dutch publishing market is piracy. The Netherlands has one of the highest levels of piracy in the world. One way of combatting it might include Bitcoin technology, as well as making it easier, not harder, for readers to access ebooks legitimately.

How, in your opinion, will the digital market in your country develop?

WdB: Digital will certainly continue to impact the traditional market, and is becoming a more serious element in our industry. For generations growing up as digital natives, this is increasingly significant, and not only in terms of distribution channels for ebooks and audiobooks, but also in the way books are written and stories are told.

We’re now starting research into the reading trends of millennials. What can we learn from them? What is the effect of their approach on reading?

How could relations between publishing companies be improved?

WdB: In these days of rapid changes and challenges, publishing companies need to pool their knowledge and strengths. Publishing houses in The Netherlands often don’t have the means to invest substantially in innovation or in new technology or business models.

So the key to survival is this growing collaborative economy. Publishing houses should try to be more trusting of each other. After all, we’re all facing the same challenges. The Dutch Royal Association of the Book Industry (KVB) is coordinating this the data center we’ve launched and will create best-practice guidance on innovation.

At the European level,  publishers can work together, too. Let’s organize a European conference in which we share our innovations and lessons learned: what worked well and what didn’t?

WdB: The German market interests me a lot, not only professionally but also  because my mother was German. We’re working together more closely with German publishers because Flanders and the Netherlands are Guest of Honor at Frankfurt, which is a good start. There are many German authors of interest to Dutch readers and vice-versa.

Which author from your country would you like to see have more international success?

WdB: There are many Dutch authors ready to go international. The Internet makes that a lot easier.  Besides well-known authors, we have great young authors who write for an international audience, including Nina Weijers, Ellen Deckwitz, and Hannah Bervoets.

This interview originally appeared in Buchreport.de