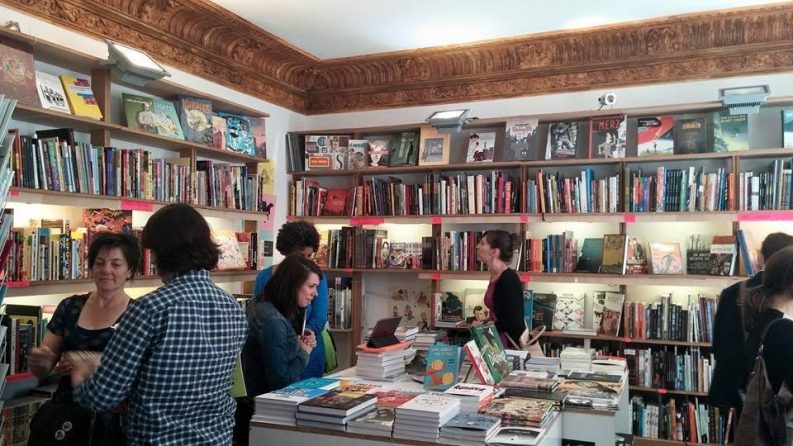 When German Book Office New York took children’s book editors to Germany from the US, UK, Canada, and New Zealand, the eight editors on the tour were surprised by some of what they discovered in networking with German children’s books editors and rights directors. We’re glad today to have  a summation of their comments from GBO-New York Director Riky Stock, who canvassed the group for their key impressions. — Porter Anderson

A Respect for Books

The group visiting Germany on the children’s book editors tour this summer comprised:

Here are some of their leading observations. 1. “Germany’s publishing industry doesn’t have school and library markets in the same way the US does. US publishers depend on sales and input from these markets in a way that German publishers don’t.”

2. “German parents really seem to place a premium on books, seeing them as special things, rather than as disposable. We heard time and again that German consumers are not so concerned with the prices of books because books are seen as valuable and lasting. This approach seems to give children’s publishers in Germany the freedom to find a special paper or do something else unusual with a book’s treatment. It seemed different from how a small house in the US such as Albert Whitman & Compan might construct a book. In the US, we tend to be bound by a budget deemed cost-efficient for us as well as the consumer. So while the US tends to treat books as products, Germany might think of bookmaking more as a craft, which I appreciate.”

3. “Booksellers in Germany are trained so vigorously and really are the ultimate gatekeepers. Their tastes affect to a significant degree what publishing houses might acquire or develop.”

4. “German bookstores have six months to return books to publishers, but some will fudge this and look to return long after.”

5. “Both German publishing houses and bookstores support authors on book tours. It’s amazing that German authors can derive so much of their annual income from these events. A book tour in the US seems riskier by comparison.”

7. “We were surprised at the number of publishers beginning ebook-only imprints. And we were surprised, conversely, by how guerrilla some of the German publishing programs were. Publishers with multiple imprints already making traditional and valuable books—like Carlsen and S. Fischer—are taking chances and establishing programs such as digital-only imprints and new-media imprints, respectively, to reach their readers directly. Rather than looking into quality materials, Carlsen recognized that teens don’t have a lot of money and made content available to them at a lower cost through ebooks. One such digital series became so successful that its fan base clamored for print books. Such a publishing model feels radical, although trade-published ebooks in the US tend to be priced more closely to their hardcovers online than are those in Germany.”

8. “We heard unanticipated comments from several publishers about the traditionalism and nostalgia of German mothers and children’s book buyers.”

9. “It was also surprising and interesting to see how much of bookselling and book-buying depends on national taste in Germany. Renate Reichstein, the Foreign Rights Director at Oetinger said that you know when you have a book with an American sensibility: American books, she said, tend to be less heavy and likelier to entertain. By contrast, in Germany, as Christiane Steen of Rowohlt explained, if a book moves you to tears, it’s seen as high-quality. During our discussions, it was confirmed that rights sales can be tough because Germans and Americans approach content so differently.”

10. “Another surprise was how difficult it is for children’s book publishers in Germany to get into the school and library market, which is so important for children’s publishers in the US, especially small ones. While a few of the publishers we met explained this challenge as schools not having the funding, it may also have to do with the buying strategies of schools and libraries. Renate Reichstein said that much of a school library’s money goes to meet the demand for Harry Potter books and other similar staples, so getting new books into school libraries is challenging.” 10 Editorial Trends in the German Industry 1. “We discussed the ratio of buy-ins versus home-grown German projects on the majority of the lists. German publishers import nearly 10 times as many titles as US publishers do.”

2. “A clear focus on creative writing has only been developing in the past 20 years, so Germany doesn’t have programs like SCBWI [Society of Children’s Book Writers and Illustrators] or a plethora of homegrown authors to choose from in the same way the US does.”

4. “It’s striking to see the efforts made to create a success, such as how Rowohlt Verlag tried Geronimo Stilton [the children’s book series established by Edizioni Piemme in Milan] in a lot of different formats before giving up. At Aladin Verlag, they experimented with the same content in different formats.”

5. “Although there’s plenty of one-off publishing, the goal seems to be to develop projects into series when there’s any kind of success with the first book.”

6. “The larger and more commercial publishers have a strong focus on brands, series, characters and product in the  5–8 years range. All the commercial publishers seemed to have this as a priority, competing against each other with these highly commercial series, looking for spin-off potential, and so on. Many see five or more editions in one series.”

7. “Full-color interior illustrations are becoming the norm in middle-grade novels, increasing the perceived value of the books. These full-color interiors have expanded the readership of these books, helping to make them more of a family affair.”

8. “We saw a predominance of pencil illustrations across a lot of the picture books we looked at.”

9. “Some of the edits to authors’ work seemed invasive to us. At times, editors were writing paragraphs into a book for the authors to accept or reject.”

10. “There seemed to be a lack of diversity in many books and no real planned effort to include characters with different-colored skin, family makeups, or sexual orientations. ‘Inclusion’ seemed to mean depicting both able-bodied and disabled characters. That said, we heard from some publishers that Germans are beginning to think about multiculturalism.  Jakoby & Stuart’s rights director Maria Stuart said that books should be reflective of what children are seeing in their world and the world beyond that, which was hopeful to hear.”