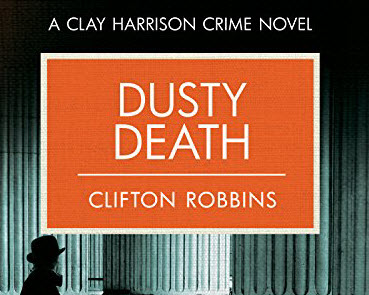 While its imprint named ‘Abandoned Bookshop’ may not seem a ray of hope in a crowded marketplace, the digital publisher Canelo is looking for a novelist’s heirs.

As Alison Flood reports in The Guardian, London-based digital publishing house Canelo has launched a search for the relatives of a crime novelist whose novels have been out of print for almost 80 years. Scott Pack, who has collaborated with Canelo to create an imprint called Abandoned Bookshop, came across Robbins’ work in a used bookstore almost 20 years ago. He tells Flood that he has almost that much time trying to track down family members of the writer.

Abandoned Bookshop has just published Dusty Death and The Man Without a Face, the first two Clay Harrison novels, as ebooks. Pack says that royalties from sales of the books will be held in case a member of Robbins’ family claims them.

In Dusty Death, Harrison is led to a drug cartel while investigating an apparent suicide. In The Man Without a Face, Harrison and his clerk Henry are witnesses to a murder.

Pack tells The Guardian that the Robbins novels,  “although very much of their time, are wonderful crime capers with a detective, Clay Harrison, every bit as compelling as Lord Peter Wimsey or Paul Temple. I am sure modern readers will take to him, and his sidekick, Henry.”

‘A Bit of a Character’

Michael Bhaskar, co-founder of Canelo and author of Curation: The Power of Selection in a World of Excess (Little, Brown, 2016), tells Flood that so far, he’s had no luck in finding any of Robbins’ descendants.

All the publisher has to go on are the thin details that Robbins seems to have been born in 1890 London, studied at Cambridge, and worked as a journalist. The year 1940 seems to be where all information stops, he says, with no new titles published after that date, and older works out of print. Some records indicate that Robbins died in 1944; others that he survived until 1964.

Bhaskar tells Flood at The Guardian:

“It’s a complete mystery who he is. Scott’s been in archives, he’s looked through newspapers from the time searching for notices of his death, he’s spoken to people all around the country, put notices up, but there’s been nothing. The trail has gone cold. It’s a very unusual situation—usually when a book is in copyright, it’s known who owns it.

“We’re hoping that opening this up to the general public will help us find a lead.” A digital publisher, Canelo pays its authors royalties starting at 50 percent of receipts.

“Our royalties are more substantial than most … [and] will be there waiting if someone comes forward, and it will go on accruing if they don’t,” Bhaskar tells Flood. “As a publisher, we respect copyright and we want to do everything we can to find these people. Hopefully we’ll see someone come forward and say, ‘This was my great-uncle’ or something.”

As for the author himself, Bhaskar says, “From his books, you get the sense that he might have been a bit of a character–there are a lot of dark shenanigans and drugs … He’s one of those people who exists on the fringes of the establishment, and flirts with the darker side as well.”

If you have any information about Clifton Robbins, email hello@abandonedbookshop.com