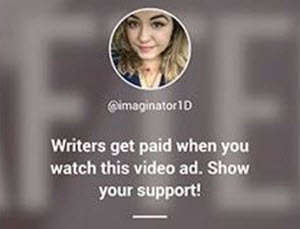 In a session called Authors Without Borders: How Global Is the Writer’s Reach Today? at the Writer’s Digest Annual Conference, several of the more than 1,000 authors, speakers, and exhibitors were unfamiliar with the ways that Canada’s Wattpad has been creating for writers to earn money.

Here at Publishing Perspectives, we’ve covered Wattpad Presents, the television series based on the platform’s stories in The Philippines (which has elevated superstars #KathNiel), as well as the Wattpad Stars who work with corporate entities to create “branded stories” content. The Wattpad Studios program umbrella that gathers these income-generating developments into one line. Today, we have word from the company’s offices in Toronto that a new availability is being rolled out for authors: Wattpad Futures gives the platform’s more-than 2.3 million writers a chance to earn income in-story.

“In-story ads are placed strategically in chapter breaks of some of the most popular stories on the platform,” according to a prepared statement from the company, “to optimize reader engagement and meet advertiser’s brand objectives including views, clicks, awareness, and favorability.”

In short, it’s a kind of affiliate program. A writer will want to encourage readers to click.

When Publishing Perspectives asked how much a Wattpad writer makes from a reader’s viewing of an ad, a Wattpad spokesperson was unable to give us actual numbers, but said, “Writers who were invited to beta-test the program have already earned upwards of $1000 per month. In every case, the majority of the revenue generated from each ad goes directly to the participating writers.”

And what’s good for the writers, goes the thinking in the offices, is good for the advertisers: “The program allows advertisers to leverage the influence and reach of storytellers,” says the news release, “to connect with millions of engaged, mobile-first millennials and generation z in the global Wattpad community.”

When an ad is available between chapters of a work on the platform, what the reader sees is an invitation to view it. Writers are paid according to views. This follows the over-arching Wattpadian pattern of rewarding authors for strong followings among the readers of the platform’s membership, 90 percent of which is engaging on mobile.

Wattpad Stars is a stable of particularly popular writers on the platform. More than $1 million was paid out to them last year, company officials say, for their abilities to draw traffic to their writings. In a prepared statement, Allen Lau—Wattpad co-founder with Ivan Yuen—is quoted saying, “The dynamic Wattpad community is unlike any other social platform. It’s the interconnected community of storytellers and audiences that makes the Wattpad Futures program a viable income source for writers.

“Readers have always encouraged their favorite storytellers with messages, comments, and votes. Now, they can support Wattpad writers in a way that increases the writer’s income, without having to pay out of pocket.”

Wattpad was established in 2006, Lau co-founding it with Ivan Yuen in Toronto. Today it has more than 45 million members spending an average 30 minutes on the platform per visit. There are more than 130,000 signups daily.

The service is offered in English, Spanish, Danish, Polish, Italian, Swedish, German, Turkish, Japanese, Chinese, Arabic, Catalan, and more languages, a total of more than 50. Some 15 billion minutes are reported shared monthly at Wattpad, while more than 200 million stories have been uploaded to date.

Administrators tell Publishing Perspectives that with The Philippines becoming Wattpad’s second-strongest national following after the States, Turkey is making a particularly strong showing this year, as well.

At Frankfurt Book Fair, join us in a Publishing Perspectives Talk at the Business Club with Wattpad Studios Head of Partnerships Ashleigh Gardner at 10 a.m. on Wednesday, October 19.

The Philippines is one of the seven pivotal publishing industry regions highlighted in The Markets: Global Publishing Summit. Download our free white paper on The Markets for more information. Registration is here with 20-percent Early Bird discounts available until August 31.