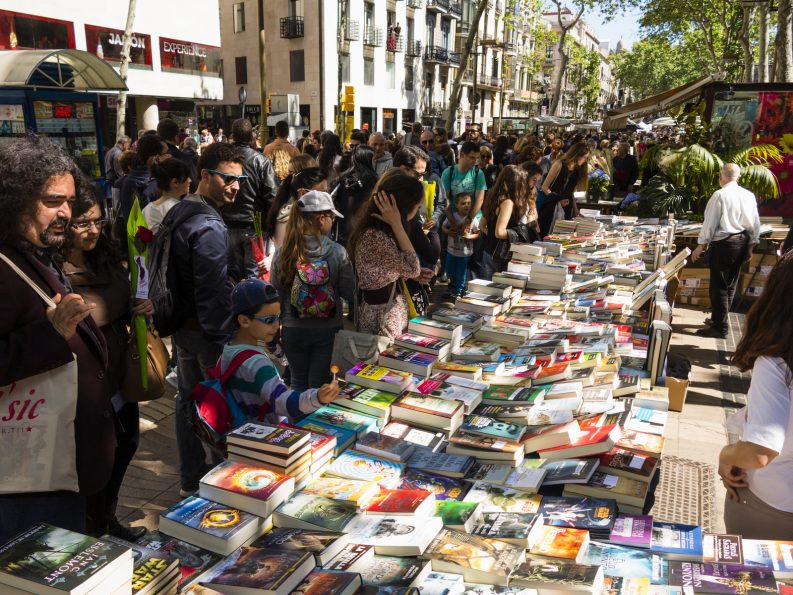 ‘It seems unlikely that the industry can make up for the 40 percent that has been lost,’ but Blanca Rosa Roca counts herself a survivor in a recession-ravaged marketplace. Last April in Las Ramblas, Barcelona: Saint George’s Day is when men give roses to women, and women give books to men. Image – iStockphoto: Jordi Delgado

Some of the most compelling commentary ahead of Frankfurt Book Fair’s The Markets: Global Publishing Summit comes from Spain, one of the conference’s seven pivotal industry focal regions. As Markets visionary speaker Javier Celaya told us recently, Spain’s culture is searching for “21st-century storytelling.” It’s good today to hear from Barcelona-based independent publisher Blanca Rosa Roca on what that might mean to her.— Porter Anderson

‘The Latin American Market Saved Us’

Blanca Rosa Roca is Director of Roca Editorial in Barcelona, and formerly was Books Director with Grupo Zeta.

Roca Editorial is an independent publishing house created in 2003 by a team of six partners.

Today, the house has more than 1,400 titles out, and has made a special commitment to digital publishing, “to sell on all platforms,” as the company’s literature puts it, “without DRM and affordably.”

Publishing Perspectives: From your vantage point, is publishing in better or worse shape than last year? Blanca Rosa Roca: The good news is that the market in Spain has stopped dropping. Actually, it has grown a little, according to the information that the Spanish Publishers’ Association has just released. We hit rock bottom a few years ago. But now we’re recovering.

Still, it seems unlikely that the industry can make up for the 40 percent that has been lost because of the financial crisis. I would say that our annus horribilis was between 2013 and 2014. In 2015 we started recovering, and 2016 is slightly better than 2015. We are happy. Spain is getting back on track.

The Latin American market saved us during the worst years of the crisis.

Nevertheless, the currency devaluation that took place in key countries like Mexico and Argentina has changed the situation and now, as a result, we are selling more books there, but the income generated by them is not the same as it would have been years ago. Now we must keep our list prices lower.

PP: Focusing on Roca Editorial’s performance this year, as far as genres are concerned, what trends and patterns would you highlight?

“The crisis was terrible: many publishers have disappeared, others have survived by fighting strenuously, like us.”Blanca Rosa Roca

BRR: Rather than talking about genres, I’d like to take a different approach. In the first place, I’d like to point out that paperback editions have seen a steady decline. The explanation can be twofold: digital books are replacing them, there’s no doubt about that. On the other hand, let’s not forget that piracy is still a huge problem for us. It affects the entire book ecosystem and it is particularly detrimental to fiction.

The trade sector is enjoying a good moment, young adult fiction (YA), above all. Generally speaking, Spanish authors are getting more and more successful. This was not so common only a few years ago, so it’s extremely good news for our market. In this group we find established Spanish writers but also new, fresh voices that are selling incredibly well.

We’ve found some of these new talents in self-publishing platforms. We liked their stories and decided to work with them. We offered them a contract and now we are publishing their books. The self-publishing market is huge in Spain, even if its impact can’t be found in statistics and official reports. This market is growing constantly. And we are making experiments: we have hired some women writers who had already self-published their works so… let’s see what happens with them. We are excited about this initiative.

As I’ve mentioned, YA is doing great. We have always had a powerful catalog in this segment. Starting from our long-established tradition of epic fantasy series like Eragon, we tested the waters to see if something more realistic, so to speak, would work for our readers.

Unfortunately, it wasn’t the case. It’s a pity because the stories were really good but if there’s no demand for those titles, what can we do? What you have to do is to move on.

Thankfully we also have successful series like Keira Cass’s The Selection, showing satisfactory results. It’s a great asset for our business.

PP: Apart from young readers, who are your consumers? How much do people still read in Spain?

“The self-publishing market is huge in Spain, even if its impact can’t be found in statistics and official reports.”Blanca Rosa Roca

PP: How do you see the future of publishing in Spain and of Roca in particular? Where are the pitfalls, the worries, the challenges for the industry in the coming months and years? BRR: In a globalized context, the biggest challenge for small and mid-sized independent publishers like us is that we have to compete with big groups like Grupo Planeta and Penguin Random House. They are so powerful and can count on big names and big launches.

Nielsen BookScan clearly shows that there are mainly titles from those two big groups at the top of the chart. Occasionally, there is a title by Salamandra, one by Roca and some others. There is very little space for small commercial publishers like us. But there is still a chance to be there.

This is our biggest challenge: to be there, at the top.

PP: So how do you see the path ahead?

BRR: Our focus is clear and we’re doing our best, as usual, to publish good authors and good books. We have extremely good authors. We are also doing our best to be cutting edge as far as technology is concerned: social networks, SEO, SEM. We have a strong marketing team that is doing amazing things. Our Web page is very active and lively, we also have an emotional search engine, it is pretty unique.

Social networks are among our priorities: readers are there.

“We have also tried to make audiobooks through our agreement with Audible. However, sales are so low, extremely low.”Blanca Rosa Roca

The digital book is here to stay. I’m deeply convinced that publishers must give up their fears about the digital world and embrace it. We can perfectly sell both formats. Those old fears about digitizing have been overcome.

We have also tried to make audiobooks through our agreement with Audible. However, sales are so low, extremely low.

Maybe in Latin America they can work better, because there you can find some of the factors that have contributed to the success of audiobooks in the US: long commutes, many hours spent travelling by car. Spain is different so I think it will be more difficult for audiobooks to catch on here. I am not saying that it is impossible, but it will take much more time than in other countries.

PP: And can you tell us something about your strategy for Frankfurt Book Fair? BRR: As we are getting closer to Frankfurt Book Fair, we can say that we’ve left the worst phase of the crisis behind.

The crisis was terrible: many publishers have disappeared, others have survived by fighting strenuously, like us.

Talking about this fight during the crisis, what I keep saying is that two factors saved us during the worst years of recession: Latin America and digital books. Those two factors helped considerably. Now that the crisis is over, we must keep on working, like we have always done. We must go to Frankfurt and buy good books.

Our challenge is keep publishing good books and maintain our position close to the big publishers.