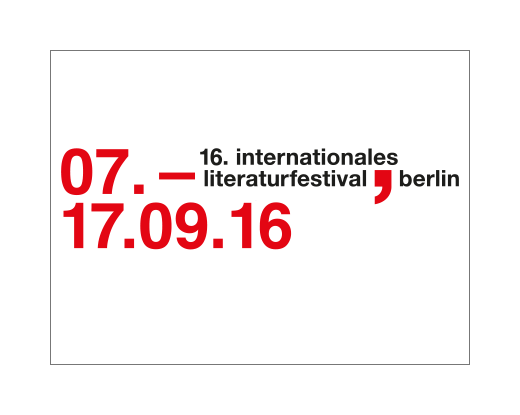 More than 216 authors from more than 30 countries have been engaged for the 2016 edition of International Literature Festival Berlin, which opens September 7. With issues in freedom of expression driving much of its programming, the International Literature Festival at Berlin in September features a host of “individuals, institutions and media outlets that care about democracy. Running September 7 through 17, the festival’s events are set at the Haus der Berliner Festspiele and other venues, in this 16th year of the program’s events. The program operates as a broad collection of speeches, symposia, celebrations, panel discussions, exhibitions, and other events, divided primarily into these groupings:

A key opening event on September 7 features a speech, in the festival’s “Literatures of the World” series, from Buenos Aires-based  author César Aira. He also will speak on the 8th, on “Duchamp in Mexico,” theorizing on modern art. More from that series of events: A Poetry Night, with ak Laor (Israel), Nikola Madzirov (Macedonia) and Håkon Øvreås (Norway), and Eva Mattes reading Elena Ferrante in “My Brilliant Friend.”

Another series of events, “Speak, Memory,” is to include commentary on Shakespeare, Henry James, Miguel de Cervantes, Albert Cossery, and others.

A set of events on “International Children’s and Youth Literature” engages content and speakers from Algeria, the USA, Belgium, Canada, Norway, Singapore, China, Lebanon, France, Sweden, The Netherlands, Japan, Turkey, the UK, and Germany. One of the The event with the most far-reaching potential effect is an opening-day “Worldwide Reading for Democracy Without Populism,” and will be of interest to people following the year’s political events in many countries.

The festival’s text “calls on all individuals, institutions and media outlets that care about democracy to participate in a worldwide reading of selected texts for democracy and against populism, on 7 September 2016. Populism describes a political position that aligns itself with the prevailing emotions, prejudices and fears of a population, and uses these to define an agenda promising simple and quick solutions to all problems.”

The rationale for the event and its stance against populism is described in festival organizers’ prepared statement this way:

“Now, in many countries across the globe, in long established and newer democracies, populist sentiment is being stoked and exploited by demagogues such as Donald Trump in the USA;  Marine Le Pen in France; Geert Wilders in The Netherlands; Recep Tayyip Erdoğan in Turkey; Nigel Farage in Britain; Viktor Orbán in Hungary; Jacob Zuma in South Africa; Frauke Petry in Germany; Vladimir Putin in Russia; Narendra Modi in India—to name but a few… Populism thrives on binaries: it’s always us against them.”

Texts provided by the program for the day include extracts from a 1982 speech by Susan Sontag; from “Politics and the English Language” and “Notes on Nationalism” by George Orwell; and from “What I Believe” by E.M. Forster. Works of Arundhati Roy, Max Weber, and Edward Said are included, as well.

More about the Worldwide Reading programs in past years is here.