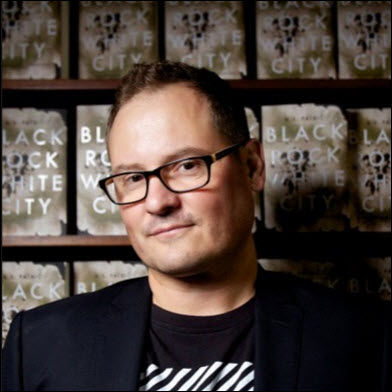 Another case of a winning novel that couldn’t attract a major publisher’s interest: A.S. Patric’s ‘Black Rock White City’ was announced Friday (August 26) as winner of the Franklin.

Winner Published by a Small Press Reporting for The Guardian in Australia, Lucy Clark writes, “Two years ago, Melbourne’s A.S. Patric couldn’t even get a rejection slip for his book, Black Rock White City. Not one of the big Australian publishers responded when he sent it; he couldn’t raise a pulse.

Along the way, Black Rock White City bested titles included Charlotte Wood’s The Natural Way of Things—which had been considered the odds-on favorite to win—as well as Hope Farm by Peggy Frew, Leap by Myfanwy Jones, and Salt Creek by Lucy Trelor. “Any of those books on the shortlist could have won. It’s an amazing shortlist, and I’ve met all the authors—they are incredibly generous and warm and talented.

“I feel like the merit here really is about the shortlist and after that—winning—is a subjective thing.

“In another year with another set of judges, anyone else could have won.”

The Franklin Award judges had this to say about Black Rock White City:

“A fresh and powerful exploration of the immigrant experience and Australian life, Black Rock White City explores the damages of war, the constraints of choice, the possibility of redemptive love, and social isolation amid suburbia.

“In language as crisp and pungent as the chemicals Jovan uses to erase the graffiti, Black Rock White City submerges the reader in its unapologetic intimacy. It is at times brutal, and frequently challenging, yet a deft poetry underlies its cinematic reach. Patric’s idiosyncratic awareness and sometimes disconcerting vision inhabits the margins between realism and fable as the novel’s invigorating vitality, astute wit, and adroit observations on the links between language and identity give us a roller-coaster read that pins the immigrant—and the wider Australian—experience with an eye that is unflinchingly, and unforgettably, honest.”

“A powerful story about Australia’s suburbs and how immigrants feel like they have not only lost their past, but also their future.”Barry Scott, Transit Lounge

For Alec Patric, whose parents were immigrants from the former Yugoslavia, the award, he says, confirms his belief in the importance of representing the working-class immigrant experience, a motif he says he finds missing in Australia’s literary landscape.”

As Patric tells Guardian Australia, “A lot of literature [in Australia] is about the middle class, and I wonder why we have so few people speaking for working-class life—not because it would be some kind of virtue, but because it’s interesting!

“Why don’t we see more immigrant stories? We have all this richness in our culture and yet you look around publishing and there are so many rural historical experiences, and everyone’s Anglo Saxon.”

And while the win was, for him, as he says, “the most momentous news of my life,” it was also big news for Patric’s small independent publisher Transit Lounge, especially when a win can mean additional sales of between 20,000 and 40,000 copies.

Clark at The Guardian quotes publisher Barry Scott, who told her that his company is “committed to publishing books that reflected multicultural Australia.

“It’s great to have that recognized,” he says. “This is a powerful story about Australia’s suburbs and how immigrants feel like they have not only lost their past, but also their future. Having said that, there’s a lot of hope in this story.”

The Miles Franklin Award was created through the will of the author of My Brilliant Career, which was self-published in 1901 by Stella Maria Sarah Miles Franklin (1879-1954), known as the feminist and author Miles Franklin. The Academy-nominated film treatment of My Brilliant Career was directed by Gillian Armstrong for a 1979 release with Judy Davis and Sam Neill. Franklin’s other key title, All That Swagger, was published in 1936.

It is said that the original investment in the award was AU$17,000. A press statement from the award organizers tells us that today the Miles Franklin Literary Award is funded at more than AU$1 million.