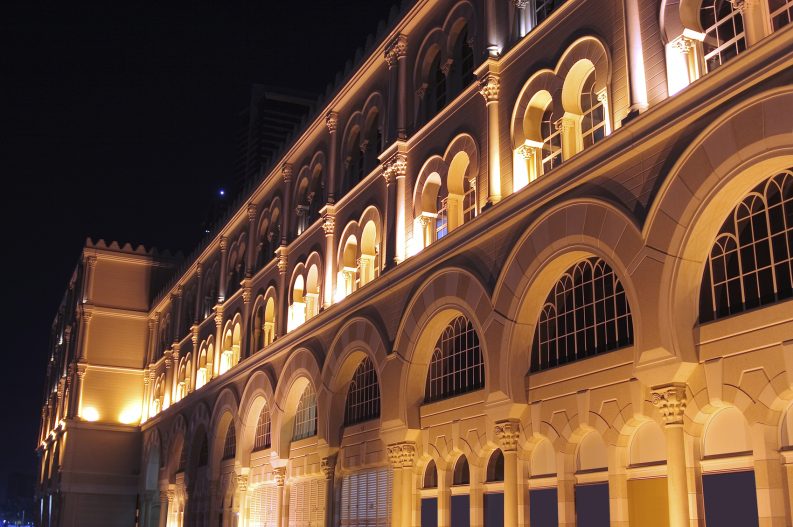 Aiming to create ‘a bridge between Arab cultures and with the rest of the world,’ Ahmed Al Ameri talks of his leadership of Sharjah Book Authority and his goals for Sharjah Publishing City. In our series with specialists (analysts, visionaries, and players) who will speak to issues in the seven pivotal publishing markets of Frankfurt Book Fair’s conference, we hear now from Ahmed Al Ameri of the Sharjah Book Authority. He’s one of the industry players from the United Arab Emirates who’ll speak with delegates at The Markets: Global Publishing Summit on October 18. In the writeup on the UAE in our free white paper on The Markets, we read, “The country boasts a literacy rate of 93 percent and high penetration of internet access at 92 percent. The current value of the UAE’s book market at €250 million ($283 million) is expected to grow in coming years.”

Ahmed bin Rakkad Al Ameri is Chairman of the Sharjah Book Authority and is credited with having raised the Sharjah International Book Fair‘s (SIBF) levels of attendance to more than 1.2 million visitors last year, with 1,547 publishers participating from 64 countries. The event saw more than 1.5 million books in 210 languages on display. SIBF’s 2016 iteration, its 35th, is set for November 2-12.

We begin our interview with Al Ameri, as we do in this series, by asking him for top-level insights into the region he’ll represent at The Markets in Frankfurt on October 18.

“The main three concerns that I would highlight as facing the regional publishing industry,” Al Ameri says, “have elements of the practical, technical and philosophical.” 1. Distribution. “From a practical perspective, the first issue I would flag up would be one of distribution,” says Al Ameri.

“Distribution is a huge challenge for book accessibility in the Middle East because each country has its own unique set of barriers, making it difficult to impossible for publishers and booksellers to gain entry for their titles. It impacts on prospective buyers who often have to pay a premium to acquire the titles they want.

“Although this is a significant current problem,” Al Ameri says, “with the opening of Sharjah Publishing City, this won’t be an issue for much longer. The first free zone of its kind in the region dedicated to servicing the publishing sector, Sharjah Publishing City’s integrated distribution company will allow for the free and unencumbered trade of books in Middle East, Asia and Africa—something that will have a tremendous positive impact on reading accessibility in the region.

“While the opening of Sharjah Publishing City is extremely good news for improving distribution, what we are talking about in the present context is an increase in the distribution of books. This brings me to my second concern.”

2. A difficulty in disseminating Arabic culture to the English speaking-world. “Naturally, as an industry that promotes Arabic, we aim to promulgate our heritage and traditions far and wide,” says Al Ameri.

“As a global phenomenon, Sharjah Book Authority is aware that one cannot fight the tide of progress, so it has looked at ways to continue capturing young people’s attention by harnessing technology to enhance the reading experience.”Ahmed Al Ameri

“The specific problem we face here is one of translation costs. Most publishing houses in the region are small concerns and the translation of their high-quality books into English is prohibitively expensive for them. We have addressed this issue with the Sharjah Book Authority Translation Grant.

“Launched at the 30th edition of the Sharjah International Book Fair in 2011, the grant takes the form of financial assistance to publishers to help them translate their works into other languages. It is valued at US$1,500 for children’s books and up to $4,000 for other titles—significant sums that help publishers cover the translation costs of their books either fully or partially.

“Before the launch of the grant, we were only translating five to six books from Arabic each year,” he says. “Now we are averaging around 70. Through the translation grant, Sharjah Book Authority is aiming to steadily increase this number so that we have a truly effective program to transform the Arab world’s rich body of literature for the international market.”

3. Technology and young readers. “For the third issue, I would highlight the increase in technology that’s having an impact on reading habits, in particular with the younger generation,” Al Ameri tells Publishing Perspectives.

“Children now are growing up in a landscape of video games and digital applications, which are inexorably pulling them away from books. As a global phenomenon, Sharjah Book Authority is aware that one cannot fight the tide of progress, so it has looked at ways to continue capturing young people’s attention by harnessing technology to enhance the reading experience.

“Through the launch of the first book of its kind in the world that uses 3D VR glasses to enable children to read and at the same time enjoy 360-degree interaction with the story, we have utilized the latest developments for expanding knowledge through the adoption of this new and exciting interactive format. The use of the VR technology here aims to attract children and encourage them to read by taking advantage of their passion for technology and its latest developments.

On Rights and ‘Bringing Cultures Together’

Publishing Perspectives: What gives you your good perspective on what the market is facing in terms of the work you do with Sharjah Book Authority and your experience? An integral component of my role both at Sharjah International Book Fair and now at Sharjah Book Authority is to promote the emirate’s publishing industry to an international audience. I do this by reaching out to global publishers and by attending publishing-related events across the world.

AAA: I’m passionate about making Sharjah the vanguard for disseminating knowledge, heritage, and traditions. When we participate in events overseas, we don’t just represent Sharjah or the United Arab Emirates, we are achieving something much bigger—we are promoting the entire Middle East, including its culture, heritage and economy.

Words and discourse are vital to counteract some of the negative forces in the world today and I know that Sharjah, under the guidance of His Highness Sheikh Dr. Sultan bin Muhammad Al Qasimi, Member of the Supreme Council and Ruler of Sharjah, has a crucial role to play in this. A great number of people we meet on our international ventures don’t properly understand the Arab world, even though they are fascinated by it.

“A relatively recent development at the fair is its international rights center, where publishers from across the world congregate to buy and sell publishing rights.”Ahmed Al Ameri

Sharjah is well placed to be a bridge between Arab cultures and with the rest of the world, something we see with the annual Sharjah International Book Fair. Since its first edition in 1982, the event has grown to become the fourth largest book fair in the world.

PP: And what do you see of special interest in the book fair this year?

AAA: A relatively recent development at the fair is its international rights center, where publishers from across the world congregate to buy and sell publishing rights. This business function is extremely important for Middle Eastern publishers, many of whom don’t travel to literature events in Europe, such as the London Book Fair and Frankfurt Book Fair. Sharjah International Book Fair encourages more books to be bought and sold across the Middle East, Asia and Africa, than any other initiative and plays an important role in bringing cultures together.