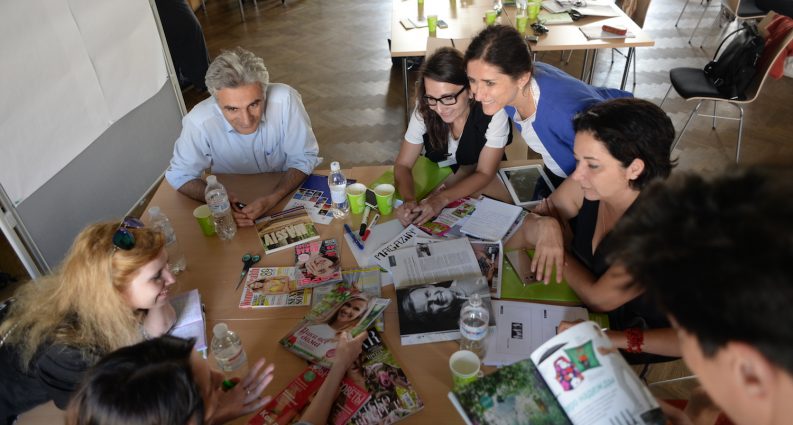 From Frankfurt’s Summer Academy, we bring you an insider look at post-Soviet book markets and the international ambitions of publishers working there. “International business doesn’t [just] mean working with America or Italy,” says Niki Theron, international projects manager of the Frankfurt Book Fair. “Collaborating with your neighbors, with people who are culturally closer to start with,” is just as important for publishers looking to build business outside their own country. Iryna Baturevych is the co-owner and coordinator of media project Chytomo, as well as a the head of Ukrainian Small Publishers Union and a book publishing consultant.

To that end, the Frankfurt Book Fair Summer Academy, held at the Goethe-Institut in Kiev on July 6 through 9, aimed to unite publishers from local and small post-Soviet markets. Participants from Armenia, Belarus, Georgia, Kazakhstan, Russia and Ukraine eagerly anticipated the four-day event, which is part of the German Foreign Office’s federal Eastern Partnership program.

The Academy received more than double the number of applications expected, and participants included CEOs and managers from various publishing houses across the region.

During the Academy, publishers considered the main constraints on the development of local markets. They also discussed future business ideas, how to implement strategic planning using their knowledge of the industry, and the synergy between business and culture.

The cultural and political context of the Academy made it especially relevant for Ukrainian participants, whose country has been in the spotlight recently—not only in the news media but also because of growing business interest from Western partners. One positive development for the Ukrainian market has been the collaboration between the Frankfurt Book Fair and the Book Arsenal, which was a result of a visit by Tobias Voss (Vice President of International Markets, Frankfurt Book Fair) to the Book Arsenal Festival in 2015. This year, Ukrainian publishers have been incredibly active at international book fairs. However, this activity is still not sufficient for effective trade abroad.

That is why the Frankfurt Book Fair Summer Academy has become the forerunner in a positive trend to build more international business in smaller book markets like Ukraine.

Below are overviews of the book markets represented at the Summer Academy and insights from publishers working there. Participants and instructors at the 2016 Frankfurt Book Fair Summer Academy in Kiev, Ukraine

In 2015–2016, it became clear that Ukrainian book market—influenced more so in the past by Russian cultural expansion—has changed course radically and chosen to assert its presence on the global publishing scene.

Civil activists, the media community, and publishers (some following the prevailing public mood, others inciting it) have entered a new stage in Ukrainian history. They are now genuinely independent and are setting trends for socially responsible business, media literacy and open dialogue. Today, many publishers have a strong desire to develop and concentrate on the Ukrainian-language market. “The lack of Ukrainian content forces publishers to buy content from abroad,” says Anton Martynov, CEO of Nash Format publishing house, Kiev. “Some 70 percent of books on our market are translations…Undoubtedly, buying rights in Russia is far easier and financially attractive, because there is no need to spend money on editorial work or to develop trade. Indeed, it would be more productive than developing the Ukrainian-language market, but that is not a long-term perspective. That could be our biggest mistake.”

The share of Ukrainian-language books has been constant (nearly 14,000 titles per year) until recently. The first half of 2016 showed an 11-percent increase in Ukrainian title production, as well as an increase in the number of unit sales—up 77 percent compared to the same period in 2015). There are no reliable book sales statistics available in Ukraine. Booksellers track sales as best they can, but many in the book trade are hoping for a better solution to the lack of data.

In 2015, the number of book titles in Ukraine dropped to 2008 levels, with popular literature averaging 15,000 copies and bestsellers nearly 35,000 copies sold. Despite the contracting market rising cover prices, and readers’ reduced purchasing power, book buying has remained stable. Reading has become more important and, in some ways, even a public backlash against Russian cultural expansion and wartime media aggression.

Ukraine has also taken great steps towards eliminating censorship. Previously, printing houses might canel book orders due to content, but the turning point was EuroMaidan and the political changes that followed. Now books about war and revolution are in demand. One outstanding example is The War That Changed Rondo by Andriy Lesiv and Romana Romanyshyn (Stary Lev publishing house), a children’s book that won the Bologna Ragazzi Award at the 2015 Bologna Book Fair and was translated into several languages.

On the digital side, Ukraine is now the fastest growing IT market in Europe, and local digital publishers are doing business abroad. For instance, Gutenbergz is one of the first digital publishers in Europe to work on interactive books for mobile devices for the last five years. Gutenbergz books were sold by Apple in 30 countries, topping bestseller lists in ten of them. Their success is an inspiring example for publishers from “small local markets.”

The Russian market is sizable, with a huge influence on neighboring markets. However, Russia has seen a decrease in book sales over the last few years. From 2014-2015, title production and book sales dropped to their lowest levels in seven years, and the forecast for 2016 isn’t much better. In addition, book exports to Ukraine, traditionally one of Russia’s largest book export market, have diminished fourfold. Increasing censorship (one example is a slate of anti-terrorism laws that took effect as of July 20 and drastically increase the government’s surveillance abilities) is further narrowing opportunities for independent publishers. However, Russia still trades actively in Belarus, where Belarusian publishers are finding themselves in a state of unhealthy and vigorous competition: “A Russian book of the same quality as a Belarusian one is much cheaper because we can’t publish so many copies”, commented Miraslau Lazouski, one of the Academy participants, and Assistant Director of Belaruski Knihazbor. “Russia is displacing us through its extensive market presence. There is a Russian equivalent in every sector. Thus Russia is not prevented from entering the Belarusian market. The only additional cost for bringing books from Russia is 700 km of logistics.”

Another problem in Belarus is censorship. First, a publishing license is required. The editor-in-chief must pass an exam given by the Ministry of Information to get the license. The exams are not always evaluated objectively.

Second, publishers can lose their license if they publish “unsuitable” literature by blacklisted authors or about sensitive political issues. Some publishers gotten around this problem by registering in Lithuania, but those publishers then face problems importing books when the content is checked.

Third, propaganda from the state media can mislead the reading public. Authors who write about current events, politics, or any topic that makes gets too close to the country’s problems are called “non-progressive.” On the other hand, authors who don’t write about sensitive issues are described as “progressive” in the state media. “That makes no sense; it’s a distorting mirror. That’s why some authors who are really successful and well-known abroad are blacklisted in Belarus. They are semi-legal”, says Zmicier Vishniou, Director of Halijafy publishing house. “This is an unhealthy situation that affects the popularity of books.”

The Kazakh publishing situation is also complicated: “We have no literary tradition; our literature has always existed in the form of folklore”, explains Aigerim Raimbekova, Development Manager of Aruna publishing house.

In addition, the development of national-language publishing faces competition from the many Russian-language books on the market. However, Kazakhstan’s publishers accept this challenge with optimism. “I don’t consider it unhealthy competition,” says Raimbekova. “It is harder for us, of course, since we are mostly financially unable to print so many copies. But it always gives us a reason to be more creative and even selective.”

The Georgian market is very active, but there are still some hurdles for developing businesses. There is no competition with Russian book publishers, but it is hard to compete with the Georgian monopolist holding Palitra Media.

Another problem is changing government policies. Diogene Publishing and several other textbook publishers in Georgia are facing bankruptcy as a result of a government program to offer free educational content. According to the International Publishers Association, “a 2013 decree…enables the state to seize [publishers’] digital textbook files without prior agreement, print the books and give them away for free.” Four publishers—Intelekti Publishing, Diogene Publishing, Artanuji Publishing and Logos Press—filed a complaint in June of this year with the European Court of Human Rights in an attempt to save their businesses.

Like in most Eastern European markets, there is a lack of objective statistical information about the book market in Georgia, making strategic planning impossible. Diogene’s director, Tamar Lebanidze, says that, due to a lack of data, their main “strategy” is now to buy only English-language bestsellers. This could adversely affect the range of Georgian content available to readers. However, Lebanidze says, “Financially successful publishers in Georgia don’t torture themselves with market research, they just go to Goodreads’ top picks, buy the rights, and see which books will become bestsellers here.”

On a positive note, the ongoing preparations for Georgia’s participation in the Frankfurt Book Fair as Guest of Honor in 2018 has led to the emergence of the Georgian National Book Center, which supports foreign translations of Georgian literature. In general, the market is strong in comparison with other post-Soviet markets, and the strong position of Georgian-language books means that Russian-language literature is less likely to dominate the market.

Despite being extremely small, the Armenian market is trying to develop international cooperation, most notably by entering the Russian market, and now it is also looking to the West. The market faces problems typical for small post-Soviet states including a weak distribution network, lack of procurement for libraries, and low circulation (500 copies for literature, on average).

“We are looking for new markets”, says Khachik Grigoryan, Managing Director of Ankyunacar publishing house. “I didn’t think I could find new partners here, but now I see that it really is possible.”