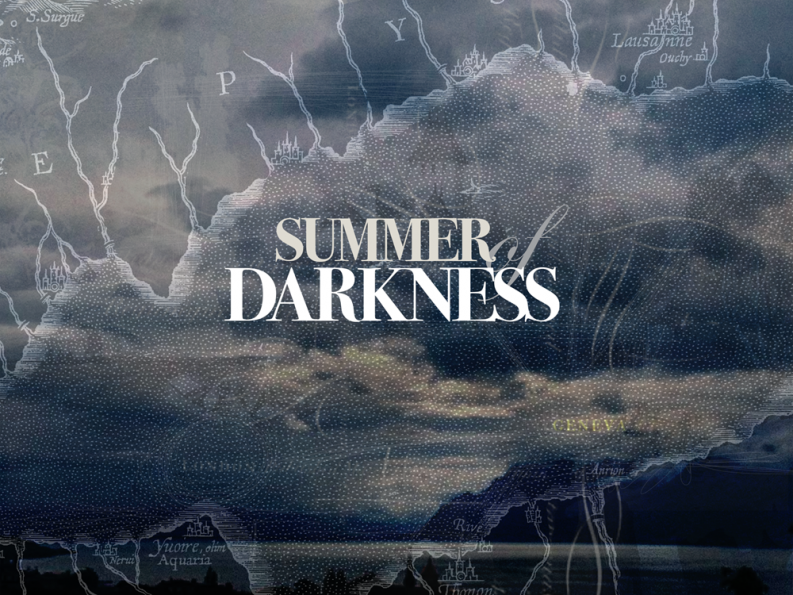 The real-life story of five of the world’s best known Romantic-era literary figures is played out in ‘a series of notifications’ via the Summer of Darkness app. ‘People Believed the Sun Would Be Extinguished’

Even as this article is written on July 19, if you’re getting daily notifications from Switzerland via the Summer of Darkness app, you might have been relieved to read: While this summer in the Northern Hemisphere may seem to be playing out under dark clouds of political uncertainty, 200 years ago, the issue was volcanic ash so compelling that some observers had predicted the world’s end on July 18.

“An Italian astronomer predicted that the world would end on July 18. This was the Bologna Prophecy,” Anindita Basu Sempere tells Publishing Perspectives. “Sunspots had become visible, and between that and the bizarre climate, people believed that the sun would be extinguished. Notifications from ‘Summer of Darkness.’ Note mention of a boating accident in which Byron and Shelley nearly capsize a boat. Shelley would drown in 1822 off the coast of Italy, aged 29. Image: Digital Scenographic

“This inspired Byron to write his apocalyptic poem Darkness right around now, so Summer of Darkness refers to both the climate and the poem.”

As for that climate: “Between 1812 and 1815,” write Anindita and Andrew Sempere of Digital Scenographic, “several large volcanoes erupted around the world including Mount Tambora in Indonesia—the largest volcanic eruption in a millennium. Ash accumulated in the atmosphere and changed weather patterns worldwide.

“1816 became known as the Year Without Summer. The average global temperature dropped by several degrees. Crops failed, many starved, and the normally beautiful Swiss summer was shrouded in gloom and rain. The world was prophesied to end in July.”

The Semperes may spend their days working on stage and screen scenography in Lausanne, but they’re also the creators of a timely app, Summer of Darkness, which is plotting certain events of 1816’s summer on the shores of Lac Léman, as the French refer to Lake Geneva.

The story of five of the world’s best known Romantic-era literary figures is played out in “a series of notifications” from the app, following the timeline of the actual events two centuries ago—”from Claire Clairmont’s romantic pursuit of Lord Byron to Percy Bysshe Shelley’s writing of Mont Blanc to the famous night when Mary Shelley had a vision of Frankenstein’s monster in response to a ghost-story-writing challenge issued by Lord Byron.”

Today, July 20, the party is departing for Chamonix. Friday, July 21, Mary Shelley will see Mont Blanc for the first time.

As notifications arrive, they give users the option to unlock deeper content—letters, journal entries, archival daily weather reports—all of which the reader can tackle immediately or save for later. And no, it’s not too late. The Summer of Darkness goes on into September, and if you like, the app will reset the story at any point for you and start over: You can start now and catch yourself right up to the moment.

In the promotional copy for Andrew McConnell Stott’s critical biography, The Poet and the Vampyre: The Curse of Byron and the Birth of Literature’s Greatest Monsters (Pegasus Books, 2014), the situation is described this way: “In the spring of 1816, Lord Byron was the greatest poet of his generation and the most famous man in Britain, but his personal life was about to erupt. Fleeing his celebrity, notoriety, and debts, he sought refuge in Europe, taking his young doctor with him. As an inexperienced medic with literary aspirations of his own, Doctor John Polidori could not believe his luck.

“That summer another literary star also arrived in Geneva. With Percy Bysshe Shelley came his lover, Mary, and her step-sister, Claire Clairmont. For the next three months, this party of young bohemians shared their lives, charged with sexual and artistic tensions. It was a period of extraordinary creativity: Mary Shelley started writing Frankenstein, the gothic masterpiece of Romantic fiction; Byron completed Childe Harold’s Pilgrimage, his epic poem; and Polidori would begin The Vampyre, the first great vampire novel.

“It was also a time of remarkable drama and emotional turmoil. For Byron and the Shelleys, their stay by the lake would serve to immortalize them in the annals of literary history. But for Claire and Polidori, the Swiss sojourn would scar them forever.”

The Semperes have designed their app, which is available for iOS, by sifting through and parsing reams of historical documents and have visited the Villa Diodati in Cologny, rented for the summer of 1816 by Byron and Polidori. The mansion now is divided into apartments, they say, and not open to the public.

Anindita Sempere says, “When we first moved here,” for Andrew’s PhD work at Ecole polytechnique fédérale de Lausanne (he was formerly with with MIT’s Media Lab Grassroots Invention Group), “we visited all the places” that the 1816 quintet had visited. “With the 200th anniversary coming up, we were excited about it and thought we should do something with this. We wanted to be able to share something of what that summer was like here.” Polidori, Byron’s doctor, was paid to maintain a journal during his travels with the poet. “Most of the material we have is from him,” says Anindita Sempere, who is now in doctoral studies of her own at the University of Neuchâtel’s Institute of English Studies, focusing on “place and poetics,” particularly in 20th-century American literature.

“There are some down periods, of course,” in the record of the 1816 goings-on, when the group’s members were busy writing their stories. “But we have material for several times a day” she says, in some cases, “and at other times we’ll go a couple of days without something.”

One of their best resources, Andrew Sempere says, is actual weather records from the time, remarkably well preserved.

“We do actually have good quality weather data for the entire year. Even at the time, it was recognized as a really unusual weather period. Our weather data is specific to Geneva” and not necessarily for the entire lake, “but it’s been digitized and is available for three years, the year before, during, and after” 1816.

Sempere says he was able to locate the historical weather content thanks to its having been published recently in a paper on climate data, “and in the context of exactly that: analysing past weather patterns for looking at current data.” “They took readings two times a day,” Anindita says. “Part of the experience of reading the app is that you get animations of the weather.”

“Temperature, wind direction, cloud cover, and precipitation,” Andrew says. “The app exaggerates it a bit for aesthetic purposes—we rain a bit more than it did—but we report the accurate date” on-screen in the app.”

“Mary Shelley turned 19 that summer,” Anindita Sempere says. “She was still 18 when she had the vision” to which she credited the idea of Victor Frankenstein’s monster. “Shelley turned 24 at the end of that summer. They had a child already, a 4 month-old.”

The Semperes have not imposed their own interpretation on the events their app depicts. “We wanted to share this story without extensive annotation,” the write in the app’s FAQ, “to keep it as immersive as possible for a general audience. Source material is in the public domain and easily accessible for those who would like additional information.” “We’re not getting enormous numbers of downloads,” Andrew Sempere says, “but those we get are sticky: we get a lot of feedback. We get fewer downloads but once they download, they interact a lot.”

Reader engagement in a mobile format: “We wanted to convey a sense of what it’s like to go through historical research,” says Andrew Sempere.

And such personalities and their interactions: you get a glimpse of the celebrated interpersonal tensions of this volatile group.

“For example,” Anindita Sempere says, “Claire is writing to Byron, ‘Oh, Byron, I know how much you hate letters, but please just drop me a note to let me know you’re okay.’

“And Byron is writing page after page to his friends in England, every day he’s writing these really long letters—just not to her.”

You can learn more about the app in this promotional video: