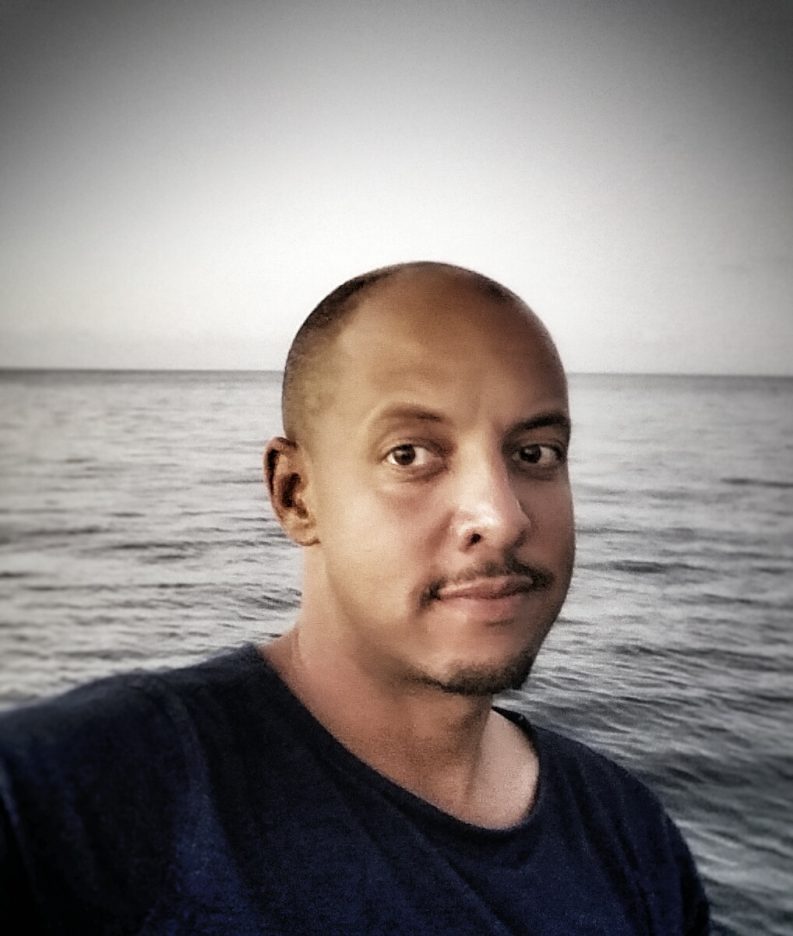 ‘Each untold story represents a world that has been erased,’ says Christopher Myers on the announcement of his new imprint with Random House Children’s Books.
Following the events in Dallas, Baton Rouge, and near St. Paul, Christopher Myers’ 2013 Young Dreamers essay—relating to the shooting death of Trayvon Martin—rings with new power: “It’s strange that we pretend shock at the stagnation, that the numbers of books explicitly dealing with the lives of children of color have not changed significantly in years, though we all purport to keep our fingers on the pulse of this dynamic industry.” Now, he approaches the issue with a dedicated imprint. — Porter Anderson
By Dennis Abrams | @DennisAbrams2

Random House Children’s Books has announced that Christopher Myers, award-winning author and artist is launching an imprint with the compan, Make Me A World, according to a news release. Jenny Brown, Vice President and Publisher with Alfred A. Knopf Books for Young Readers, will oversee the new imprint.

The phrase “Make Me A World” is said to be a reflection of Myer’s vision for the imprint: a selection of books that open up new worlds, possibilities, and pathways for young readers of all ages. Myers is intent on adding voices of diverse thinkers and artists from all walks of life to his list – including

Make Me A World will debut its first list in 2018, with astronomer Ray Jayawardhana’s Child of the Universe, a lyrical work which unfolds as a conversation in which a father explains how the entire universe has “conspired” over billions of years of time to bring his child into his life.

Also on the list is Mama Mable’s All-Gal Big Band Extravaganza! By Annie Sieg, a picture book that tells the story of female musicians like the International Sweethearts of Rhythm, and Walk Toward the Rising Sun by Ger Guany, a memoir that tells the inspiring story of a pivotal time in the life of a young man from South Sudan who escapes the worst situation imaginable, through the gift of friendship.

Myers, the son of Walter Dean Myers, is quoted as saying that he sees the influence of his father on the core mission of the new imprint: “I am excited to embark on this endeavor with Random House to launch Make Me a World.

“Every day in the newspapers we see how much stories matter, the stories we tell each other and ourselves, and for too long many stories have been neglected, many storytellers ignored. Each of these untold stories represents a world that has been erased.

“My father built worlds for countless children in his stories. He wanted to make sure no child felt erased as he had, growing up poor and black in Harlem in the 1940s, where brown, bright faces like his own were nowhere to be found in the pages of books.

“Make Me a World will continue that work, recognizing storytellers from all walks of life that can build for contemporary children a sense that they too have the ability in their creative hands, in their hearts, to build their own worlds.”

Barbara Marcus, President & Publisher, is quoted: “I have long been an admirer of Christopher Myers’s way of thinking about literature and art, and believe that his talent and perspectives uniquely position him to create an imprint focused on celebrating diversity of every kind, and the power of books to transform lives. We are eager to watch Chris develop his future lists, and for children, teens, and families to experience the stories that his authors and artists will tell.”

Christopher Myers, in addition to illustrating his own titles, he has worked with authors including e. e. cummings and Zora Neale Hurston. He and his father worked together on the Caldecott Honor winner Harlem, as well as the Coretta Scott King Book Award winners Black Cat and H.O.R.S.E. He collaborated with dancer Misty Copeland on the picture book Firebird. Myers works in media including photos, gouache, woodcuts, collage, and other artistic media.

His artwork has been seen at MoMA PS1, Contrasts Gallery in Shanghai, the Prospect Biennial in New Orleans, and at the Cooper Gallery at Harvard. Myers co-directed the 2014 documentary film Am I Going Too Fast? with Hank Willis Thomas, and recently designed a translation of the Egyptian Book of the Dead into a performance called Go Forth, directed by Kaneza Schaal.

Christopher Myers has written several notable essays, among them Young Dreamers, a reflection on Trayvon Martin and Ezra Jack Keats’s The Snowy Day, as well as The Apartheid of Children’s Literature, published in The New York Times in 2014.