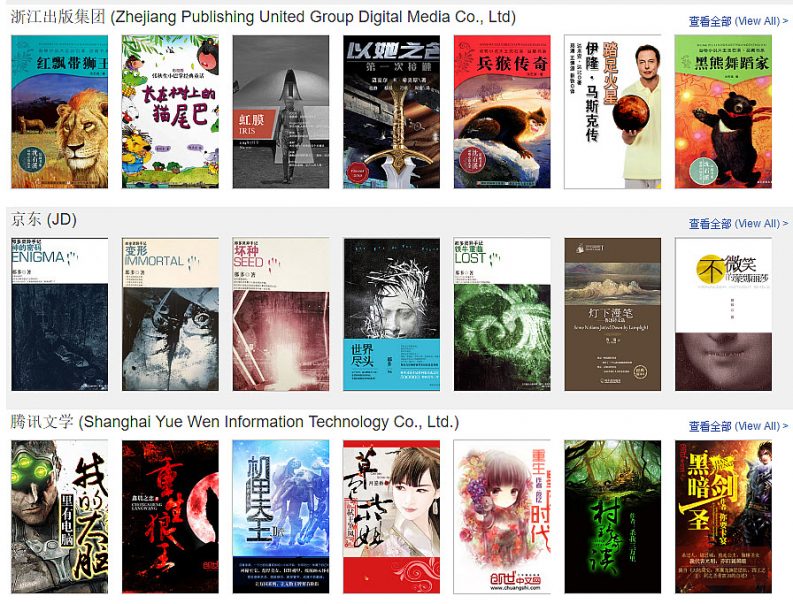 In a newly created arrangement, Chinese publishers are being introduced to international export through a ‘Three Book Program’ organized by Boston-based digital distribution firm Trajectory. Chinese books being processed by Trajectory’s systems for distribution at the time of this article’s publication. Image: cn.trajectory.com

The intention of the Three Book Program for China, says James Bryant, “is to assist Chinese publishers in exporting their books from China. It has a high level of cooperation between a large number of participants,” including governmental agencies as well as publishers. Bryant is the co-founding CEO of Trajectory. Based near Boston, in Marblehead, Massachusetts, Trajectory is a digital distribution network with especially deep connections in the Chinese market.

“The basic program,” Bryant says, “involves Chinese publishers providing Trajectory with three books that will then be placed in the global distribution platform. Along the way, there are many steps and partners whom we’re excited to be bringing together.

“The Chinese government is underwriting the first three books” that a publisher places into this new program for international exposure. The selection of which books to put forward is up to the publisher to make, and the books may be in any format. “The first stop, then, is our partner Formax in Beijing,” Bryant says, “which converts the books into all the formats needed for the process.”

Once the formatting is done, the text is then partially translated to English by CCTSS—the Chinese Culture Translation and Studies Support agency. The translation covers a book’s title, descriptions, and a first section, much like a sample in many online book retails settings. “It’s a solid sample,” Bryant says, “about the first 10 or 20 percent.”

“Then there’s an organization called CBI, which is involved in issuing ISBNs in China. They’re cooperating as an official member of the team to provide us with metadata.”

“One of the value propositions here is that Trajectory has translated the BISAC (Book Industry Standards and Communications) codes into Chinese, and we’re making these classification codes accessible to Chinese publishers for the first time. China currently lacks a comparable standard classification system. So using the standardized BISAC classification codes, we use that as a starting point to understand what classification the publisher intends the book to have.”

In addition to distribution, Trajectory’s work is in Natural Language Processing (NLP) systems. With an ultimate aim to having retail book recommendations made using NLP analysis of a host of “vectors” or storytelling components, Trajectory’s NLP work parses a book into digitally expressed profiles.

“And what we’re doing once we have these books coming in” through the Three Book Program, Bryant says, “is running them through our NLP at Trajectory, the Chinese-language version. Using that NLP, we’re able to identify the closest matching books. And those closest matching books may have more descriptive BISAC codes, which we then are evaluating to include with the original BISAC code. That helps with the discoverability of the titles. This is a sample listing of a Chinese book, showing the kind of English-language information and presentation the Three Book Program can offer to Chinese publishers wanting to display their work internationally. Image provided by Trajectory

“The next step is that we present these books through our global distribution platform, and Trajectory is providing the dashboard for the publisher to see daily sales results through the program worldwide,” which exposes the books’ availability to some 350 retail, library, and school distributors.

Publishers retain 100 percent of any revenue from sales they make in the Three Book Program, Bryant says. But in addition to the initial three books, publishers in China can opt to place more books into the program for a fee—that, of course, is the business proposition for Trajectory, which hopes to see many more than three titles coming from many of China’s publishers as a revenue center for its own operation. Currently, Jon Malinowski‘s PubMatch rights-trading platform—which operates in nine languages—is carrying the Three Book Program’s titles, serving as a kind of portal to the rights community to help give interested rights buyers access to them. By contributing its services to the Three Book Program, PubMatch should be able to “migrate the Chinese publishers to the PubMatch platform,” as Bryant puts it, cementing new relationships with new sources of content in the East. “The overriding value in this part of the program is to introduce PubMatch to China’s industry as part of the global distribution process.”

What’s tricky about this?

“They come onto PubMatch,” Malinowski tells Publishing Perspectives, “as Chinese titles,” a key element of the program’s outreach to Chinese-language parties around the world.

“PubMatch has close to 13,000 members right now,” Malinowski says, “and that’s from 158 countries. For the Chinese publishers, we’ve built some tools in the backend to make sure the [Chinese] characters are correct. When they create their catalogs” on the platform, “the characters come out correctly. My IT group spent a couple of months on it,” he says with a laugh.

Initially, Bryant says, the Three Book Program’s free service for a Chinese publisher’s first three books will default to that carefully built Chinese catalog. In further submissions of more titles, the capacity to be cataloged in English editions will be made available, as well. The sample section that CCTSS has translated to English, however, will be present with each title displayed.

Research provided by Trajectory indicates that in 2015, 29 percent of title unit sales in Chinese language books was make in the United States; the next largest national representation was Australia, with 13 percent of Chinese language unit sales, followed by the UK and Japan at 9 percent each, Canada at 8 percent, Germany at 7 percent, and Singapore at 4 percent.

If the Three Book Program creates a rewarding enough experience for Chinese publishers, Bryant says, his hope is that he and Trajectory will have basically built the pipeline for those publishers to use in exporting much more of their content to a world warming up to translation and busy with new content. More Chinese books being processed by Trajectory’s systems for distribution at the time of this article’s publication. Image: cn.trajectory.com