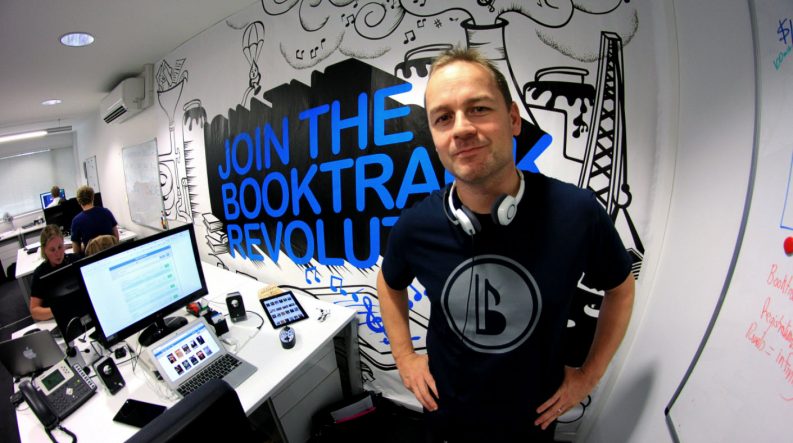 The ebook-soundtrack company Booktrack announces an arrangement with Little, Brown on novellas for young people, following years of work in ‘Booktrack Classroom.’ The announcement that New Zealander Paul Cameron’s Booktrack is partnering with Hachette’s Little Brown Books for Young Readers on select novellas isn’t without some background in the youth readers space.

Less than a year ago, Cameron, interviewed for The Bookseller’s The FutureBook, spoke about his company’s participation in the Google for Education program with its own Booktrack Classroom effort, which Cameron said reaches into more than 12,000 classrooms internationally. He would go on to give a presentation on the company’s work at Frankfurt Book Fair’s Business Club in October 2015.

When the company’s press materials say “Booktrack is proven” to increase comprehension, retention, and reading satisfaction, that’s a reference to survey work discussed last summer in which University of Auckland and New York University tests indicate that sound enhancements can increase comprehension by 17 percent and reading retention by 30 percent.

From the news release issued Thursday (July 21) about the Little, Brown partnership:

“The collaboration offers YA readers an innovative new way to experience their favorite stories through immersive, synchronized movie-style soundtracks for popular ebooks.

“Popular novellas by bestselling YA authors—such as Libba Bray, Laini Taylor, Kami Garcia and Margaret Stohl, Jennifer E. Smith, and Rebecca Serle—will be made available on Little, Brown’s Booktrack page throughout the summer, with a regular monthly stream of new releases to come.”

In his prepared statement about the new Little, Brown YA arrangement, Cameron is quoted saying, “Hachette Book Group has always been a leader in the publishing industry and is once again ahead of the curve by leveraging Booktrack’s technology, harnessing its unlimited creative potential for authors to deliver an immersive new experience to their readers.

“The soundtracks add a totally immersive, enhanced experience to the amazing Hachette titles we’ll be offering in our library.”

For Hachette, Senior Executive Director for Content Development Tina McIntyre says, “Booktrack is doing exciting things in the digital space. We are eager to have these newly imagined digital versions of original titles available. We expect they will add an extra layer of reading enjoyment for current fans, while bringing a whole new audience to the titles to experience the joy of reading and listening together.”

The basic concept of matching soundtracks to ebooks has remained in place since Paul Cameron’s co-founder, Mark Cameron, was interviewed briefly in 2011 at Frankfurt Book Fair by Publishing Perspectives‘ Erin. L. Cox. Press materials say that Booktrack has an international following of some 3 million authors, up from a reported 2.5 million last August.

Work in 40 languages is included in Booktrack’s output, the company says, which comprises more than 16,000 titles.

The “studio” program offers dashboard access to audio so that authors can create their own soundtracks on a 70-30-percent royalty split. This is the facility that educators have used in Booktrack Classroom, allowing students to generate their own soundtracks to text. On the other hand, a publisher might opt to have Booktrack’s staff create a soundtrack for a price of some $1,000 or more.

Some of the titles the company says are coming in the Little, Brown program (its digital original imprint NOVL) include:

The mysterious part of the Booktrack technology has to do not with speeding up and slowing down an orchestral sound bed but actually playing more or less music (or other sounds) according to a user’s reading rate. The system, Cameron says, actually has more music than a fast reader will hear, so that there’s extra audio to be played out for slower readers, as the program measures each consumer’s read rate and responds.

And as in many approaches to “enhanced” experiences of reading, Cameron has said in the past that he recognizes the fine line between bolstering the reading context and invading it. “We don’t think of this as enhancement because we keep you reading” he has said. “We want to immerse you, not interrupt, you.”