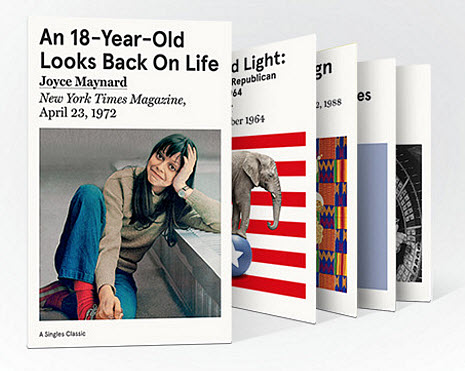 Echoes of a bygone Byliner: Opening with more than 140 knees-up essays and stories, Amazon is betting that Singles Classics can make e-shorts sexy at last.

A New Attempt To Give e-Shorts Legs?

It may be a sign of the times that when Amazon announced last week its new Singles Classics offerings—”iconic authors, timeless stories”—the response from the publishing community was fairly muted. Don’t mistake that, however, as disinterest. For the most astute observers, that yawn is feigned, and this is an especially notable arrival, considering the backstory.

Note that some reporting on the issue has been incorrect: Singles Classics are being made available not only in the States but also “in the UK as well as to English speakers worldwide,” as an Amazon spokesperson tells Publishing Perspectives in answer to our inquiry.

David Blum, the gifted editor of Kindle Singles, was quoted in the company’s news release, saying, “Today’s readers might never have the opportunity to discover great works like Ron Rosenbaum’s ‘The Secrets of the Little Blue Box,’ Marcelle Clements’ ‘The Dog Is Us’ or TIME Magazine’s legendary 1966 cover story ‘Is God Dead? With Singles Classics, we are making these seminal works easy to find and afford–by a student writing a term paper or by readers in search of short works by the writers they love.”

Blum’s Kindle Singles were introduced in January 2011, a curated program handled by the former editor-in-chief of The Village Voice.  That editorial structure distinguished the Singles from simple shorter works self-published on the Kindle Direct Publishing platform (KDP). The New York Times’ Dwight Garner wrote in March 2012 that while “Kindle Single is not a promising name”—too much like “a type of person you might meet on the dating service eHarmony”—the format, which he termed minibooks, had merit: He described Singles as “works of long-form journalism that seek out that sweet spot between magazine articles and hardcover books.”

And you’ll remember that this was a time of experimentation in segmenting the Kindle’s commercial ecosystem.

Another development was the Kindle Serials program announced with Jeff Bezos “dragging out the obligatory Dickens reference,” as Laura Hazard Owen wrote for GigaOm. If anything, the serials seemed to be singles strung together to eventually be packaged as complete reads.

There may have been a whisper around Seattle of, “Hm, haven’t we just reinvented the whole book?”—because the Serials offering seemed to go quiet rather quickly, although they’re still offered and serialization, itself, continues to be a favored approach of many authors and publishers.

In fact, publication platforms for serial, episodic formats still are being created, as is the case with Molly Barton’s relatively recent Serial Box, which promises an installment of a new work “from our writers’ room to your mobile device every Wednesday.”

What such efforts may contend with, of course, is the Age of the Binge, when networks release whole series on a single date. It’s not immediately clear to all of us that readers are any happier than miniseries-bingers to wait for a next episode to land.

But in 2011 and 2012, just about all things with “singles” in their names appeared to have potential.

And Then, the E-Shorts Stumbled

“On Christmas Eve Day in 2012,” Owen would write in 2014, “I sat in a Starbucks and wrote an enthusiastic post about why it had been the year of the e-single. E-singles—works of journalism between 3,000 to 15,000 words, usually nonfiction and sold as individual ebooks—were “a true digital-native format,” I wrote, “the format for our time,” ideal to read curled up with your iPad.”

Is Singles Classics an answer to James Patterson’s Book Shots?—small paperbacks for small attention spans sold in small stores and other points of purchase.

By 2014, she would write, “my enthusiasm seems less than prescient.”

Her article focused on the then-faltering Byliner, which had launched in 2011. “Its original mission was to publish original e-singles, both fiction and nonfiction, and also to create a sort of archival home for journalists on the web,” Owen wrote. The conclusions she came to had something to do with Byliner’s $5.99 monthly subscription model, probably hard to sustain “when so much longform journalism is free to read online.” What’s more, Oyster and Scribd were rising at the time with bigger offerings of entire books. Eventually, of course, Oyster would founder and sink, Scribd would flail.

In one-off encounters, a Byliner read could be quite engaging. The author and bookseller Ann Patchett’s The Getaway Car: A Practical Memoir about Writing and Life, for example, is a 46-page Byliner Original of charm and lively insights into a writing life. It lies on the sales page at Amazon looking a whole lot like many worthwhile Kindle Singles. And as engaging as such works can be, are there that many consumers purposefully sifting the rising Wall of Content for short reads to pay for? In a world of free blog posts, news reports, and magazine features, how many more short reads do we need? Longform.org and Longform Fiction, after all, are in place as guides to material “freely available online.”

It’s an exciting day! Byliner is so pleased to announce that, along with @pronoun, we will now be joining Macmillan Publishers!

What you see now at the Byliner site is, according to the About page, the entity’s “new chapter as an imprint of Pronoun—publishing urgent, necessary journalism for the present day.” Of eight features listed on the landing page, only five link to live pages.

Taking a New Stroll in e-Shorts

“A way to make iconic articles, stories and essays from well-known authors writing for top magazines and periodicals available in digital form, many for the first time.”Amazon Singles Classics promotional copy

With Amazon’s brightly designed Singles Classics now on the table, the industry has another opportunity to observe this concept of the shortish-longish read, which never yet has seemed to gain enough focus to wear well on the publishing landscape.

The Singles Classics proposition sounds great, certainly. Amazon calls it: “A way to make iconic articles, stories and essays from well-known authors writing for top magazines and periodicals available in digital form, many for the first time. Readers can now enjoy easy access to hard-to-find and long-lost articles and stories written by some of their favorite authors. Singles Classics are priced from $0.99 and available free to Kindle Unlimited subscribers.”

That note on Kindle Unlimited subscribers is important. Amazon has the power to make a lot of things survive in its digital dome, things that would perish quickly on the open market. Kindle Unlimited, itself—its subscriber service that plows ever onward as other all-you-can-reads stagger—is an example of this unique staying power because it has a symbiotic relationship with the Kindle ecosystem that’s generating historically unprecedented numbers of titles in its self-publishing hothouse, KDP Select.

One longtime observer who has carefully followed the “singles” context for many years, however, tells Publishing Perspectives that the market for such e-singles is “very niche,” and the overall market for Singles hasn’t caught fire as some expected it to.

Some might see d-shorts today mainly as a promotional tool for major authors, more for visibility than revenue generation. “Classics seems to be Amazon’s attempt to wring a little more revenue out of the edges,” says one commentator close to the topic, “to bring some additional eyeballs to the Singles storefront, and add more value to the Kindle Unlimited offering.”

Certainly, for authors, Classics look helpful: “With Singles Classics, writers and publishers sell their previously published work via Kindle Direct Publishing,” say press materials. This will “earn them up to 70-percent royalties from the sale of every copy and allow them to retain the rights to their work.”  Still, the returns on these editions, which start at 99 cents per copy, may not be substantive. As Owen has asked, can e-shorts ever find their stride in such low-range income channels?

Blum’s Singles programs have always been carefully and respectfully published, thoughtfully curated, and—thanks to the splendor of Amazonian marketing capability—radiantly visible to consumers when the company wanted them to be. Maybe there’s a longer spin ahead this time, with such truly iconic writers as, per Amazon’s opening salvo, “Susan Orlean, Norman Mailer, Gloria Steinem, Lawrence Wright, Margo Jefferson, Gay Talese and Chang-rae Lee,” along with “short stories from best-selling authors like John le Carré and Kurt Vonnegut.”

One thing to watch: Is this to become Puget Sound’s answer to James Patterson’s Book Shots?—small paperbacks for small attention spans sold in small stores and at other points of purchase. Remember, Amazon may soon have more small stores of its own catering to small attention spans and some small reads may not go amiss among the bricks and the mortar and the online pricing of Amazon Books.

Another thing to watch: Whose ox is gored? Does an author do better with Singles Classics than with a piece sold, say, at Esquire Classics? There, a $4.99 subscription gets readers unlimited access to the archive.

Time, as with all things in heaven and Amazonia, will tell whether this latest iteration of the Singles/e-shorts option can find favor with buyers. Certainly, anything that allows the author to profit from the classic work is likely to be deemed a plus.

For readers? It’s yet another win: “Now with Singles Classics,” says Seattle’s news release, “readers have access to the articles and stories that have shaped decades of conversation and thought.”

In the era of Amazon, it is good to be a consumer—that’s the long and the short of it.