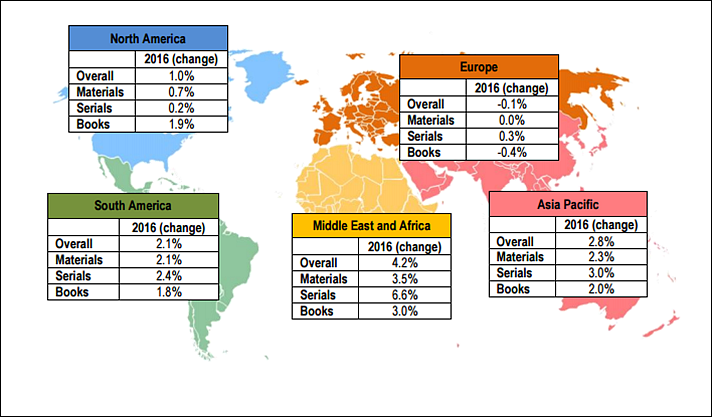 An annual study of institutional libraries’ budget forecasts shows participating libraries in the Middle East and Africa forecasting the largest increases; Europe is the only region forecasting a (slight) decrease. Update: Our friend Chris Kenneally at Copyright Clearance Center’s Beyond the Book podcast series talks with Publishers Weekly’s Andrew Albanese, in part in reference to this Publishers Communications Group survey. Listen to the podcast here.—PA

Senior librarians with control over and knowledge about library budgets were contacted at 686 institutional libraries in North and South America, Europe, Asia, the Middle East and Africa for a new report, Library Budget Predictions for 2016.

“The data in this study,” report authors write, “has been weighted to reflect the global contribution of each country to library spend. All counts in the report are based on the weighted number of responses, rather than the actual number.”

The study has a 3.3-percent plus-or-minus margin of error, but the survey’s authors caution that in some cases librarians are making estimates rather than working with known figures.

Overall library budgets are anticipated to increase, internationally, by some 1.4 percent (over a 1.2-percent increase forecast last year).

All regions forecast an increase with the exception of Europe, where the forecast decrease is mild, at some 0.1 percent.

Of particular interest, participating institutional libraries were asked about their expenditures on electronic resources.

“Overall,” the study’s authors report, “59 percent of the budget is used for electronic information, with North America spending the highest proportion (72 percent). This is a 2-percent increase on the previous year.

“The South America percentage drops by 9 percent to 38 percent, however the sample size here is low and more prone to fluctuation.

“Overall, Academic Top institutes continue to have the greatest proliferation of electronic resources.” More is available in the study report, found here in PDF.