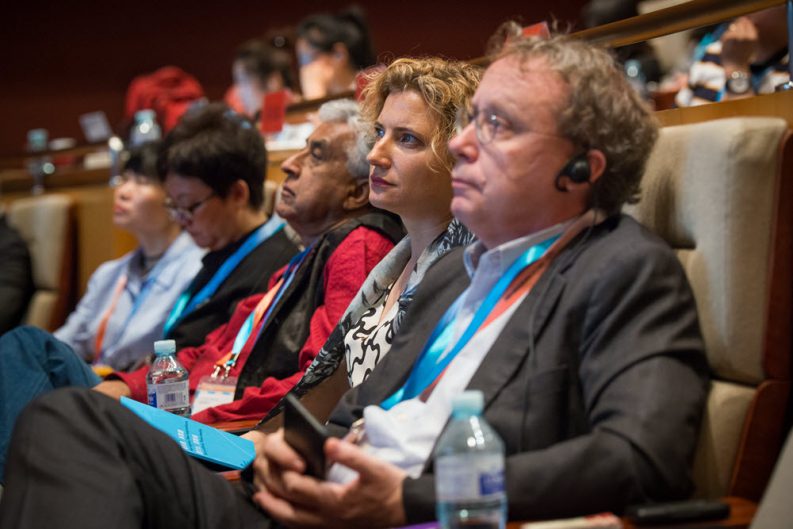 With a new StoryDrive Asia event coming to Singapore, Beijing’s fourth iteration revved the potential gains that develop when content industries fuel each others’ expertise. It’s no surprise to those of us who work with Frankfurt’s Holger Volland that he coined as useful a phrase as “Hyper IP” at StoryDrive Asia 2016 in Beijing. What we’ve called “transmedia” at times is the concept of bringing various media sectors together so that the challenges and strengths they each bring to the widening table of international creative industries are enriched by each other. Four years into StoryDrive Asia’s development in Beijing, already are being taken for the November 10-12 inaugural staging of StoryDrive Asia in Singapore, to be powered, no doubt, by Hyper IP. — Porter Anderson

Before Indian publisher Bipin Shah traveled to Beijing, he visited his bookseller in Singapore.

Shah arrived with a vision but left disappointed. He tried to convince the bookseller to take his beautifully illustrated books about Indian art into the program, but the bookseller preferred art books from Europe.

“To create an attractive ecosystem of the new cultural avant-garde.”Juergen Boos on the StoryDrive goal

Ignoring fellow Asian cultures was exactly what StoryDrive 2016 in Beijing aimed to change. This year, everything was about incorporating and including “New Regions, New Inspirations“, as it was put in the tagline for the fourth iteration of Beijing’s StoryDrive at the end of May in Beijing.

After Shah gave a talk about the Indian book market, Gong Li, a Chinese senior editor, presented a project already underway: a huge plan for mutual book translation between China and India. The selected Indian books aren’t published in English, but in regional languages like Hindi and Bengali. At first sight, the Indian book market seemed to be a market dominated by the English language. But Gong Li and her colleagues found out that many non-English books contain valuable Indian thinking, which the Chinese are keen to study.

In addition to establishing a platform focused on Asia, StoryDrive 2016 had even bigger ambitions.

As a highlight of the China International Fair for Trade in Services (CIFTIS), StoryDrive presented speakers with impressive diversity: Along with top culture managers and politicians, there were professors, publishers, digital publishers, filmmakers, writers, agents, scouts as well as other creative professionals. The “new regions” speakers who were invited hailed from nine different countries: Brazil, Germany, India, Indonesia, Singapore, Turkey, UK, US and, of course, China.

How important are stories in the digital age and how do they work? , Director of Frankfurt Book Fair, answered these questions in his opening speech in saying that today’s stories should definitely meet technology, economics, and science. The “cross-disciplinary thinking has become even more important,” he said.

“Writers nowadays work directly with technologists or coders, when a book is enhanced with gaming elements.”

Boos set the goal of Beijing’s StoryDrive 2016: “To create an attractive ecosystem of the new cultural avant-garde.”

Wu Shulin, former vice-minister of General Administration of Press and Publication China, shared his personal story about Chinese online literature with the 300 participants.

Ten years ago, Shulin was confronted with a difficult decision—whether the government should grant permission for “online literature,” cheap commercial novels on the Internet. The business proposal was that all content generated by Internet users must be free, and the writers with the largest number of clicks would be rewarded by the online platforms.

Online literature is a very China-specific phenomenon. Being aware of the political risks that might come by way of free writing, Shulin still let things go. Today, he’s proud that he made the right decision: online literature has turned out to be a mega-business in China, helping top writers earn tens of millions of US dollars annually. This model helps millions of people read stories around the clock on devices like smartphones or tablets at very low cost.

“Never underestimate your users. They do love entertainment, but they’re also ready to pay for cultural products of high quality.”Yao Wentan, Youku Tudou

“Only there will you find the right stories for TV or Internet-TV adaptations,” Xiaoqiang said.

That’s because online novels are extensively read, responded to, and annotated by fans through all kinds of data collection, comments, and sharing. Xiaoqiang says he believes there’s no better guarantee for market success than promising data. The audience has no choice but to trust in the words of a person whose two-year-old company recently produced several chart-topping films. He also talked about why a book fair like Frankfurt produces such events as StoryDrive: “We want to bring storytellers and product developers together,” he told us. “What kind of medium comes out at the end, doesn’t matter.”

Against the trend towards pure entertainment, YouTube’s pendant in China, Youku Tudou, is currently attempting to screen some high-end cultural programs. Yao Wentan, executive producer, spoke about her cultural adventure on one of the most successful commercial video platforms in China. The series was named Look Imagination, and it involves topics including classical painting, music and international literature, presented on camera by three intellectuals.

Against all expectations, this series has enjoyed immense success.

Wentan said that just recently, the program attracted more than 10 upscale advertisers, including automotive and high-tech brands looking to place Web ads in the program. The target audience of Look Imagination is aged 25 to 35.

“Never underestimate your users,” Wentan said. “They do love entertainment, but they’re also ready to pay for cultural products of high quality.”

More on the new, upcoming StoryDrive Asia in Singapore.