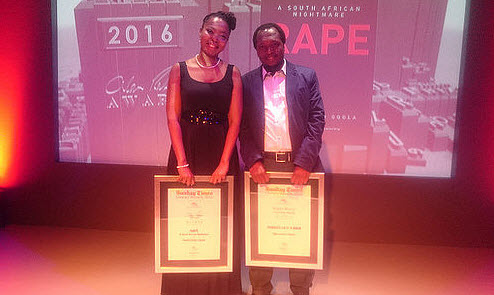 The ‘overt threat of toxic masculinity’  and ‘the vapid promises of politicians and religion’: socially poised nonfiction and fiction are awarded in the work of Gqola and Sithole.

‘An Urgency Reflected in the Themes’ The Sunday Times reports that the winners were announced over the weekend, and that besides the “prestigious accolade,” each author is awarded prize money of 100,000 rand (US$6,590).

Sithole, who teaches at the University of Zululand, was awarded the Barry Ronge Fiction Prize for fiction (the prize won last year by Damon Galgut for Arctic Summer) for his first novel, Hunger Eats a Man, published by Penguin Books South Africa.

Gqola, a professor of African Literature at Wits University, was awarded the Alan Paton Award for her book Rape: A South African Nightmare, published by MF Books. The Barry Ronge Fiction Prize is given to “a novel of rare imagination and style, evocative, textured and a tale so compelling as to become an enduring landmark of contemporary fiction.

Of Hunger Eats a Man, chair of the awards judging panel, Rostum Kozain said, “This is something entirely new in South African literature, in terms of its language and style. The writing is exceptional in the way it bends English to its own purpose. It’s a beautiful, disturbing, highly original novel with touches of unexpected humour.”

The story is set in KwaZulu-Natal and examines the plight of rural South Africans. Sithole has a PhD in English Studies. In an earlier interview with the Sunday Times, he discussed the genesis of his book:

“The novel is about poverty and people’s struggle to overcome it, or survive in spite of its prevalence. The idea came from the fact that I had experienced poverty growing up. So when apartheid ended everybody thought their lives were going to change for the better. It did not happen for many people. In fact, most people are worse off than they had been during apartheid.

“I hoped to write a book that would alert the people in power about the danger that we face in South Africa if the gap between the rich and the poor is not bridged. Indeed, in dealing with poverty, the question of corruption could not be ignored. The idea was to try [to]tell the story of a suffering people in a way that is not so depressing, that people can enjoy in spite of everything.” The Alan Paton Award is presented to a book that presents an “illumination of truthfulness, especially those forms of it that are new, delicate, unfashionable and fly in the face of power,” and that demonstrate “compassion, elegance of writing, and intellectual and moral integrity.”

In Rape: A South African Nightmare, Gqola investigates the history and causes of the epidemic of sexual violence in the country. “This is a fearless book that speaks a powerful truth of our times. Nuanced and cogently argued, it tackles the subject from every possible aspect in an attempt to deal with the unspoken,” said Achmat Dangor, chair of the award’s judging panel.

In an interview published earlier in the Sunday Times, Gqola said:

“I wrote the book because rape is endemic in this country and elsewhere, and yet we seem no closer to reversing the tide. This is largely because we have a collective public discourse that is repetitive; so we express the same frustrations, sense of hopelessness and mystification about its causes.

“The book is an attempt to contribute on how to shift our sense of hopelessness as a country to thinking through how certain patterns of behavior enable rape culture and a rape crisis.”

Sunday Times books editor Jennifer Platt said, “The Sunday Times Literary Awards have always acted as a sort barometer of the nation’s preoccupations, highlighting books that pick up and explore our concerns.

“There is an urgency reflected in the themes of the winning books this year: of poverty, hunger and the vapid promises of politicians and religion in one, and in the other the overt threat of toxic masculinity that pervades South Africa.”