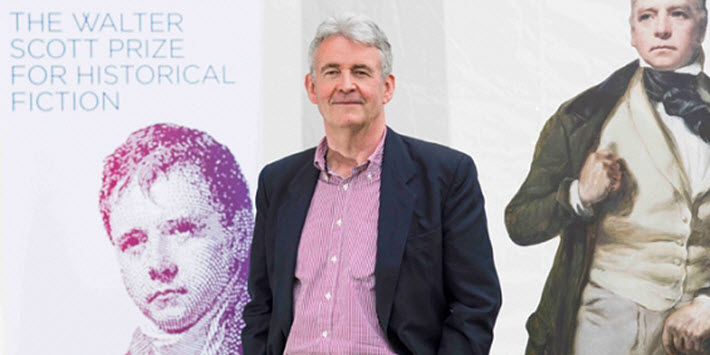 Despite the fact that he says “I don’t consider myself a historical novelist at all,’ Simon Mawer wins the £30,000 pound Walter Scott Prize for Historical Fiction. ‘A Spy Story in the Grand Tradition’

The winner of this year’s £25,000 Walter Scott Prize for Historical Fiction is Simon Mawer for his novel Tightrope (Other Press). The author, originally shortlisted for the prize in its first year, returned to Melrose, Scotland, six years later, to receive his prize from the Duke of Buccleuch on June 18 at the Brewin Dolphin Borders Book Festival.

Tightrope follows the story of Marian Sutro, a survivor of Ravensbrook who has returned to London to “pick up the pieces of her postwar life. It’s Mawer’s 10th novel; his seventh, The Glass Room, was on the shortlist for the prize in 2010.

Of Tightrope, the Judges said: “Tightrope is a spy story in the grand tradition, sweeping the reader irresistibly into the harrowing life of a secret agent in World War II. Impeccably researched, it perfectly inhabits its time and place. It is a worthy winner of the Walter Scott Prize for Historical Fiction.

“Marian Sutro, who made her first appearance in The Girl Who Fell from the Sky, is a commanding character, enigmatic and fascinating. Damaged by her experiences, by the dangers she has faced, by those who have betrayed her and those she has been forced to betray, Sutro walks the tightrope between the people in her life who have sent her into danger, those whom she must fear, and those she seeks to protect.

“Tightrope, however, is more than a very good spy thriller. We are used now, in a century already scarred by wars, to the concept of post traumatic stress disorder. There was no such diagnosis in the aftermath of the 20h century’s terrible wars, but it afflicted millions, nevertheless. Simon Mawer has given us, in the character of Marian Sutro, a study of how the terrifying events she endured in her youth shaped and transformed the rest of her life.”

Created to honor the achievements of Sir Walter Scott—considered by many the inventor of the historical novel—The Walter Scott Prize is awarded to the best UK, Irish or Commonwealth novel (set more than 60 years in the past) of the previous year.

The prize reflects, however, a broad interpretation of how to define historical fiction, as Mawer commented after being shortlisted for Tightrope:

“I don’t consider myself a historical novelist at all–all I do is write novels about what interests me at the time… and the recent past is where my particular interests lie. However, I think our collective past should be important to everyone: if we don’t comprehend where we’ve come from then we won’t have any idea where we are going.”

The core criteria for the Judges of the Walter Scott Prize are the quality, longevity and innovative nature of the writing. The prize’s six years of shortlists include Hilary Mantel, Robert Harris, and Andrea Levy.

One of the UK’s biggest fiction prizes with a total value of £30,000 (US$44,000), the Walter Scott Prize is sponsored by the Duke and Duchess of Buccleuch.

“Its heart is in Scotland–as was Sir Walter’s,” the prize’s public information says, “but its reach, appropriately for the first international bestselling author, now extends around the globe.”