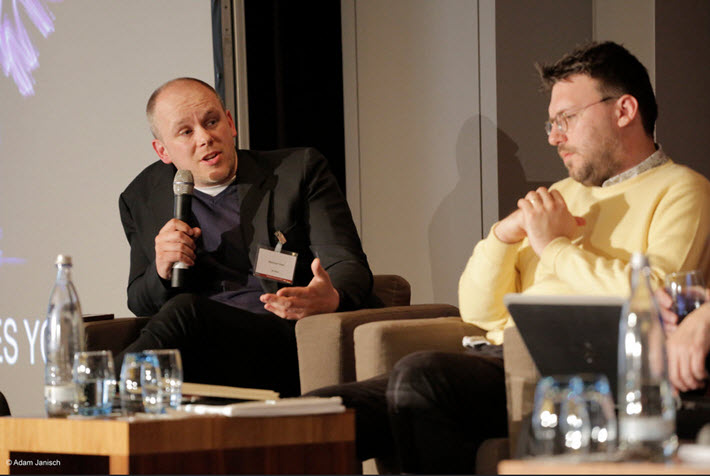 Nathan Hull, left, speaks on a panel with Canelo’s Michael Bhaskar at the 2015 Publisher’s Forum staged by Klopotek in Berlin. Image: Adam Janisch

Hull’s departure means that one of most articulate voices in support of the beleaguered concept of ebook subscriptions may be leaving the field. With many observers convinced that only Amazon’s Kindle Unlimited program can flourish—by carrying self-published titles from the Kindle Direct Publishing Select (KDP) platform and by setting its own terms for payment—Hull has been a champion of the idea that all-you-can-read subscriptions can be made sustainable.

His exit is a surprise, in that commentary from both Storytel and Mofibo at the time of the buyout in late May—for a reported 100 million Danish kroner (US$14.8 million)—indicated that both Strunge and Hull would stay in place. Nothing in Publishing Perspectives‘ interview with Storytel’s Jonas Tellander seemed to suggest otherwise.

In a statement, however, the company says, “Nathan Hull has chosen to step down from his role as Chief Business Development Officer.”

Hull is quoted in a prepared comment as saying: “We’ve achieved a lot at Mofibo since I joined.

“We added audiobooks, we grew our customer base significantly, we improved our tech even further, we launched into Sweden and the Netherlands, we put Mofibo into the conversations with publishers, agents and the general industry globally. Perhaps most importantly, we validly put subscription services for publishing into the mindset of the consumers and we’ve changed the playing field. And I’m proud of what we’ve achieved.

“The acquisition of Mofibo speaks volumes on the forward direction for publishing subscriptions and now is the perfect clean moment for me to move on with Morten’s [Strunge] blessing and goodwill.

“I leave the international plans and development strategy in a strong position and in good hands. I look forward to watching the new paired companies blossom.” “I prised Nathan away from one of the biggest publishing houses in the world. And he didn’t disappoint.

“His publishing and tech connections range across many markets.

“Along with this strong market understanding and contacts, Nathan brought his broad cultural understandings, technical knowledge and digital publishing acumen to really propel Mofibo to its next level internationally and into the consciousness of publishers across the globe.

“We understand and support his decision and Nathan and I will no doubt work together again in the future.”

That large publishing house Strunge is referring to is Penguin Random House, where Hull had been Digital Product Development Director, handling many of the company’s digital and audio strategies as well as projects in support of major authors including Jamie Oliver, Stephen Fry, Jeff Kinney, and Roald Dahl.

Hull was introduced to Mofibo in 2013 in Copenhagen and joined Strunge’s team from PRH the following year.

Making the Case for Subscriptions

There’s no word yet on Hull’s next role. But should he leave the ebook subscription business entirely, the sector will have lost one of its most outspoken proponents.

, he told the audience that the way to have a successful ebook subscription service was in making sure that the goals of the service and of the publishers were unified. The key to this, he said, was data: ebook subscription services like Mofibo are capable of monitoring anonymized data on user reading habits and, Hull said, should proactively share this data with publishers. “To take the most extreme model,” Hull said in a panel appearance at that Berlin conference, “in Denmark, we are actively working with one of the really big publishers—which are in general the slowest to move—to use data to create fiction in a completely different way.

“This may make some people cringe. And I’m not saying that it can create the perfect crime novel. But…some of the data we supply shows the reading speed at which people are moving through a book. In the parts of the book in which you’re establishing the characters and building up the plot, people tend to move very quickly. Moments of high drama and high suspense, they’re eating it up, they’re going right through. But when it get a little bit dry and uneventful, we can really see that people are a lot slower. We also can see that they tend to skip sections.

The depth of information a service like Mofibo could provide to a publisher, Hull said, was substantial: “We can tell you where they’re sitting, the times of day they’re reading, what devices they’re on — for all your advertising campaigns.”

In an essay for The Bookseller’s The FutureBook, also in April 2015, Hull wrote that Mofibo “operates almost entirely around the performance behavior of its users.” He wrote:

“Our data is gathered from a continuously evolving reading environment where habits are formed. Not just purchase habits—but also frequency of reading, locations for reading, devices on which people read and much more. There’s layer upon layer of rich, contextual data that reveals an incredible amount about readers’ behaviour. Just take the 1.2 million pages of books read every day on Mofibo, throw in the 600,000 minutes of audiobooks listened to daily and imagine the possibilities of that combined scale.”

But Hull also has voiced frustration in the industry’s perceptions of all-you-can-read subscription services as being built on business models that can’t be sustained.

Not long after the Berlin appearance last year, Hull wrote, again for The FutureBook, about “a misinformed maelstrom” of opinion around subscriptions because of the struggles of US companies:

“While the publishing world’s US subscription players (Oyster, Scribd, and Kindle Unlimited) remain everyone’s favourite punching bags—and as Spotify vs. Apple Music vs. Tidal splinters the user experience in the music world—ebook subscription services across Europe such as Mofibo (Scandinavia), Nubico (Spain), Skoobe (Germany) have to navigate unnecessarily complicated waters, constantly justifying their own positions and dodging the looming tar brush that “subscriptions are bad news”—all because of the actions of others.”

And shortly before the announcement of the Storytel buy of Mofibo, Hull was in Chicago for BookExpo America, in a presentation on Mofibo, “A Subscription Success Story or Mofibo: Something’s Ripe in the State of Denmark.”