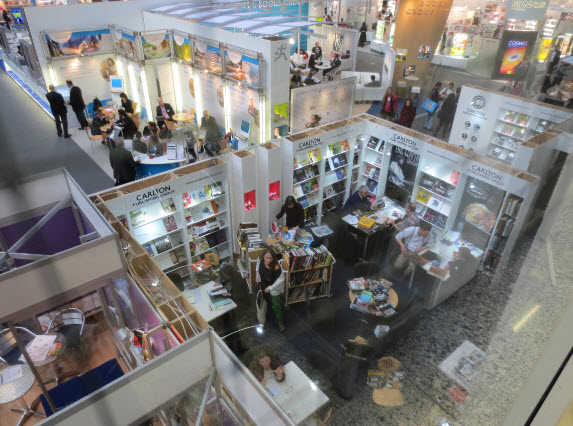 A German developer of a multimedia textbook platform will be presenting its work on Frankfurt’s free ‘Wildcard’ stand for October’s trade show. ‘Welcome to the Jungle’

Within eight weeks of announcing its “Wildcard” competition for a free stand at Frankfurt Book Fair in October, 137 applications had been made from more than 20 countries, “from Austria to Myanmar,” organizers say, “to Israel and Brazil.”

According to a news release from contest administrators, “The innovative business models included everything from self-marketing author collectives that host readings in supermarkets to cookbook apps with VR experiences.”

While virtual-reality recipes for the kitchen didn’t win the stand, “The many innovative ideas submitted made it a very difficult decision for the jury,” reads a statement on the site. “An incredibly wide range of publishers responded to our slogan ‘Welcome to the Jungle’–and we wish we could present them all at the 2016 Frankfurt Book Fair.”

Those who did make submissions are being offered a special “jungle discount.”

And meanwhile, the winning entry was made by Benjamin Heinz, CMO of the Eichstätt-based Institut für digitales Lernen, the Institute for Digital Learning, in reference to its development of the mBook, a multimedia textbook. Not unlike the mix of content provided by Cengage’s approach, the mBook system is “competence oriented” to encourage learning by its users.

Heinz is quoted as saying, “The Wildcard is a great opportunity to call attention to our multimedia textbook (mBook). Moreover, with the ‘Edu Couch’ we want to create a space for the topic of digital education, in order to stimulate new ideas.”

Heinz and his associates will have a multimedia presentation of their work at the fair.

“The institute for digital learning develops, produces and integrates digital applications for learning in schools, museums and public places. The institute is spin-off  from the University of Eichstätt-Ingolstadt.

“At present the work of the institute is focused on the development of multimedia textbooks for history classes. Content and presentation of teaching material is aimed at specific target groups [and is adaptive for] learning conditions of individual students.

“The tremendous diversity and internationality of the ‘Wildcard’ applicants,” says competition administrator Markus Gogolin, “proves that creativity is a dominant force in the publishing industry.”

The video below is an explication of the mBook concept (in German).