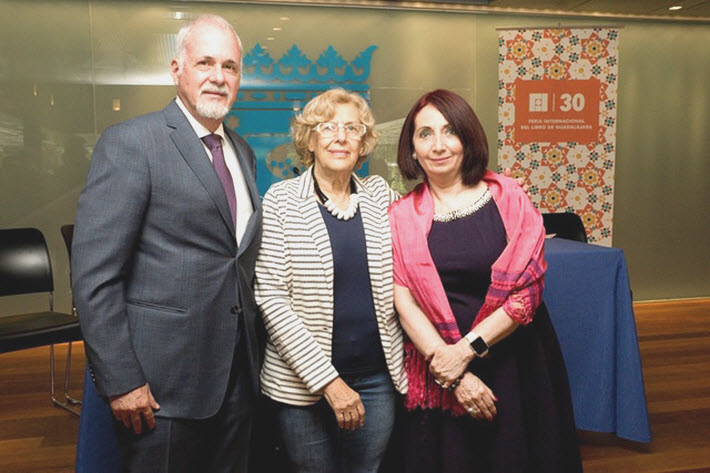 Spain’s capital city will be the special guest at the world’s largest Spanish-language book fair next year in Guadalajara, the first time since 2009 a city has been granted the honor. Last City To Have the Honor was Los Angeles

Madrid will be Guest City of Honor at the 2017 Guadalajara International Book Fair (FIL), the event’s organizers have announced.

The FIL usually invites a country or region as guest of honor, with Latin America having been extended the invitation for this year’s fair. The only other city to have been named guest of honor was Los Angeles, in 2009.

The announcement was made in Madrid by FIL president Raúl Padilla López and the mayor of the Spanish capital, Manuela Carmena Castrillo, with FIL director Marisol Shulz Manaut.

“Books have saved people’s lives, they have allowed for ideas, actions and change to be bound together, and they are an essential key to changing the world, to improving it,” Madrid’s mayor Carmena Castrillo said during the announcement.

“Mexico established a very special bridge using books during the Franco dictatorship,” she said, expressing her gratitude to the FIL for selecting the city as guest of honor.

FIL President Padilla López said the 2017 fair will be an opportunity for a re-encounter between Madrid and Mexico.

The Comunidad de Madrid, as the metropolitan area is known, is Spain’s largest book-producing region and home to the Real Academia Espanola (RAE), the Instituto Cervantes, and the Fundación del Español Urgente (Fundéu), a non-profit organization aimed at promoting correct use of the language.

Madrid will participate in the FIL with a delegation of publishers, authors, illustrators, designers, translators and agents.

The 2017 FIL will take place from November 25 to December 3 at Expo Guadalajara.

This year’s fair runs from November 26 to December 4.