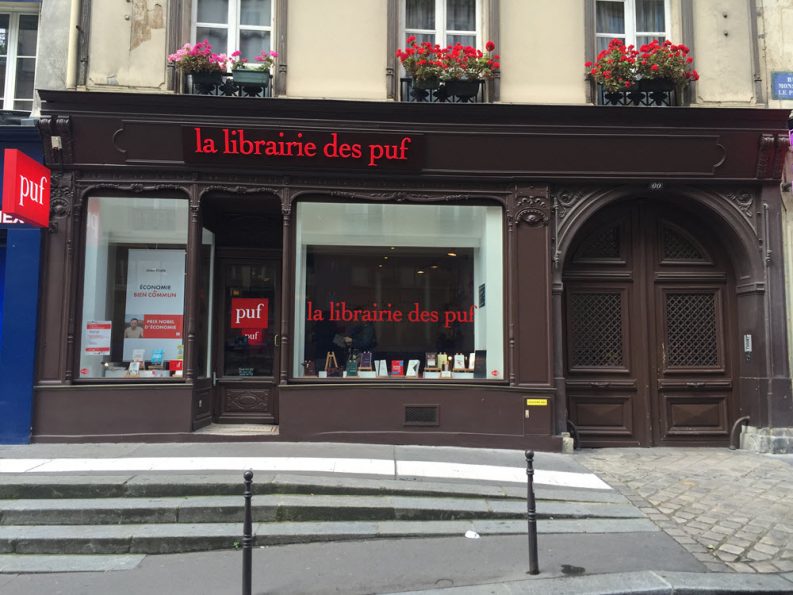 ‘We don’t have a problem with space,’ says Alexandre Gaudefroy. His bookshop can provide you with one of millions of titles, while you wait. Print-on-demand has a dedicated foothold in Paris. France’s bookstore for Les PUF, the university presses, is selling some 30 books a day from an Espresso print-on-demand (POD) machine. As the shop’s Alexandre Gaudefroy says, “We are a publisher, a distributor, a printer, a bookstore.” And it’s working. — Porter Anderson

‘The Perfect Model for Any Distribution’

With its reportedly book-free, bijou premises, and Espresso print-on-demand book machine, the new Paris bookstore of the Presses Universitaires de France (Les PUF) has been attracting considerable attention since it opened three months ago. Last week, the New York Times had Ciara Nugent write up the development as part of independent bookstores’ efforts “to carve a path out of their business’ decade of decline.”

Here at Publishing Perspectives, we covered the opening of the store in March, and have returned to catch up with the man behind the machine, Alexandre Gaudefroy, to learn how the new store is getting on.

Not Quite an Empty Bookstore

“We are a publisher, a distributor, a printer, a bookstore. After that, you only have the author.”Alexandre Gaudefroy

The bright red lowercase lettering of the store’s signage immediately marks it out from its more sober competitors. A window display promotes a new title by Jean Tirole, winner of the Nobel Prize for Economics, and an event the following evening with author David Simonnet.

On opening the door, however, it’s immediately apparent that this is not quite the “bookstore without books” that some have suggested it is.

The left wall is given over to shelves displaying some of the publisher’s newest offerings, along with a good selection of titles from two of the press’ flagship series, the Quadrige collection of great works–Freud and Henri Bergson strongly represented–and the highly popular Que sais-je? (“What do I know?”), whose nearly 4,000-strong series of titles, begun in 1941, offer concise, accessible, and–at only nine euros–affordable introductions to a wide range of topics.

In front of the shelves stand a couple of mobile devices—tablets. Showrooming of a Different Kind

“The bookstores in Paris haven’t changed in maybe 20 years. You can’t propose the same offer to your customers now that you did 20 years ago. That’s why bookstores are closing.”Alexandre Gaudefroy

On the opposite wall, some comfortable benches stand beneath a collage of pictures of Les PUF authors and an installation of curiously-angled shelves displaying more books.

Gaudefroy describes the thinking behind the store, which is markedly smaller than its predecessor: “Fifteen years ago, we had a store near here—a 600-square-meter place. Here it’s only 80 square meters.”

Describing the new store as a “showroom,” he says, “With the help of technology–the Espresso machine–we don’t have a problem with space because, with the tablets, you can have a lot of titles.”

Those tablets hold details of 5,000 Les PUF volumes, while the Espresso itself contains three million more, drawn from publishers like HarperCollins and Penguin, and from Google Books. Gaudefroy is keen to extend the catalogue to works by other publishers–“My manager and I have tried to convince some other French publishers to have their titles on the tablets.” He says he’s optimistic that this will soon happen: “We believe that in three months we could have maybe 10 or 20 more publishers than before.”

Gaudefroy is realistic about the difficulties, however, he says. “For each publisher, there’s one contract, and one set of negotiations. It’s not easy to have a lot of publishing companies.”

Access to a ready-made catalog of titles is, for him, one of the key advantages of the store being both publisher and bookseller.

“It’s difficult for bookstores because they don’t innovate…Publishing companies, bookstores, and all sectors of the supply chain have to understand that this kind of bookstore could be the future.”Alexandre Gaudefroy

Gaudefroy says he thinks this all-in-one model offers possibilities for other publishers too. “We are a publisher, a distributor, a printer, a bookstore. After that, you only have the author.”

Print-on-Demand, “POD,” is also, Gaudefroy says, a liberation. “The magic system of the Espresso machine is that you print one book to sell one book, and that’s the perfect model for any distribution company,” he says.

Such innovation is certainly needed among France’s booksellers, he says.

“It’s difficult for bookstores because they don’t innovate. The bookstores in Paris haven’t changed in maybe 20 years; you can’t propose the same offer to your customers now that you did 20 years ago. That’s why bookstores are closing. Publishing companies, bookstores, and all sectors of the supply chain have to understand that this kind of bookstore could be the future.” ‘The magic of the Espresso machine,’ as Alexadre Gaudefroy calls it, produces a book in about five minutes. Image: Alastair Horne

More Than Breaking Even

“In three or four months, I hope to say that we’ll open 10 stores in 10 big cities in France, and maybe in other countries.”Alexandre Gaudefroy

Sales are good, Gaudefroy says. The store sells some 30 books per day, of which 85 percent on average are Les PUF titles, and 15 percent are from other publishers in the Espresso catalog. Reports have suggested that the store needs to sell only 15 titles per day to break even, but Gaudefroy is keen to clarify this point.

“I need to sell maybe 20 books [daily], but it depends on the price of the books. For example if I sell 20 Que sais-je? then the price is nine euros, so it’s not the same as selling a book at, say, 25 euros. You can write a figure, but it’s not really important to know if we sell more than, say, 20 books. We need to sell books,” he says with a laugh.

A key to hitting those sales targets, Gaudefroy says, will be expanding the store’s student audience. He says that only 30 percent of the shop’s customers today are students. The rest are local people, including lecturers.

Building word-of-mouth is also important, and the recent flurry of publicity, he says, can only help. “Every week, we have a magazine speaking about this bookstore in Paris.” Gaudefroy is optimistic about the possibilities of expanding La Librairie des PUF beyond a single store.

“We need to know if we have the money to do so,” he says. “We only opened this store three months ago, so it’s too early to say whether we might be able to imagine 10 or 20 stores. But in three or four months, I hope to say that we’ll open 10 stores in 10 big cities in France, and maybe in other countries.”

When the interview is over, one of the storekeepers walks me through the process of printing a book.

We choose a title from the listings on one of the tablets–a volume from the Que sais-je? series on the history of Paris–then step to the back of the store, past the till and coffee machine, to where the Espresso machine itself can be found, surprisingly compact.

“The magic system of the Espresso machine is that you print one book to sell one book, and that’s the perfect model for any distribution company.”Alexandre Gaudefroy

The store associate enters a few details into a terminal, and for the next five minutes we watch as the pages and cover are printed, cut, and bound, before a brand new copy of Yvan Combeau’s Histoire de Paris appears at the side of the machine.

If Gaudefroy’s ambitious plans come to fruition, La Librairie des PUF may soon be writing its own chapter in the history of Paris bookselling.