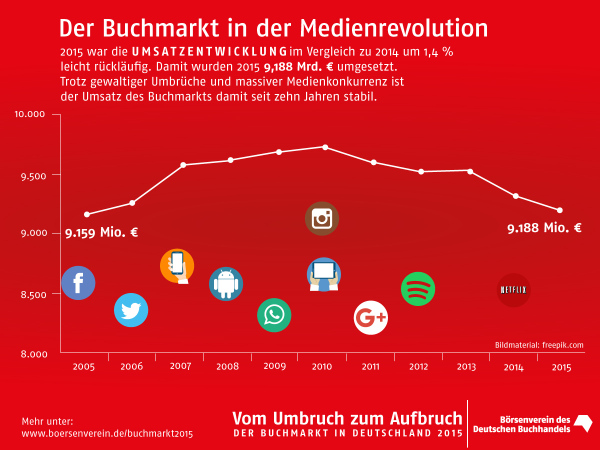 The latest sales data from the German book market shows that readers are gravitating toward nonfiction instead of fiction and buying more books online than before. The latest statistics from the German Publishers and Booksellers Association

Each year in June, the German Publishers and Booksellers Association holds its annual press conference to present economic data and key statistics about the German book market in the previous year. This year, another important topic was the recent Copyright Levies ruling that could possibly plunge some publishing houses into bankruptcy. Below, you’ll find an overview of the most important key findings:

Online book sales went through tremendous change (including online business belonging to stationary bookstores) last year and increased by 6%, now adding up to a turnover of 1.6 billion euros and 17.4% of all book sales in Germany (2014: 16.2%). The numbers also show that the times of mail order are finally over. This distribution channel accounted for just 1.3% of book sales and 118 million euro in 2015, which is a decline of 26.4% compared to 2014.

The nonfiction segment has continued its successful streak and once again increased its sales, this time by 1.6% (5.4% in 2014). Nonfiction now has a market share of 10.3%. Fiction sales, traditionally the strongest category on the general market, dropped once more by 1.6%, now making up 32.1% of trade books sold. Children and YA titles maintained their 15.8% part of the market share, while their turnover dropped by 1% compared to 2014.

Alexander Skipis, Managing Director of the Börsenverein, pointed out the importance of innovation in saying: “The German book industry is counted among the largest in the world and is exemplary in its structure. Publishers and bookshops have proven their ability to turn industry-wide upheavals into opportunities and also to find new paths and invest wisely. Bookshops are also well on their way to successfully implementing their multi-channel strategy, and publishing houses continue to foster an active culture of innovation.”

All the economic figures for the German book market in 2015 can be found in this PDF (in English). Stay tuned for our next article on the rights and licensing market.