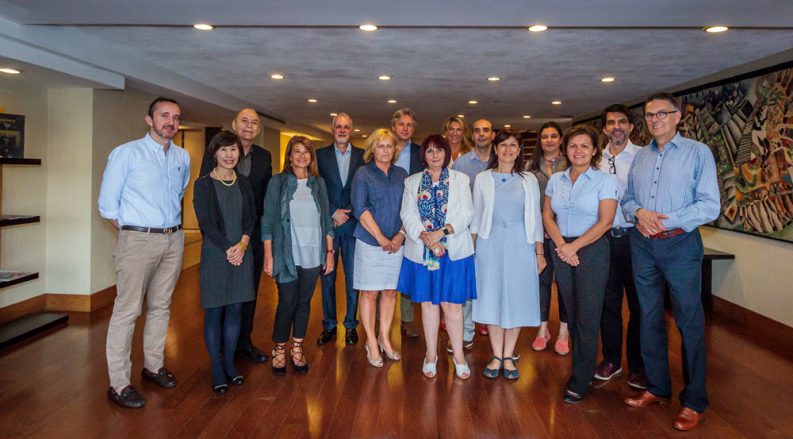 In their biennial meeting, a dozen leaders of international book fairs gathered in Guadalajara to discuss their progress, challenges, and evolving viewpoints on the book trade. The Conference of International Book Fairs directors attending this month’s biennial meeting in Guadalajara were photographed by Josue Nando.

According to DataFolha, Sao Paolo’s 23rd Bienal Internacional do Livro was attended by 720,000 visitors, 35 percent of whom were between 26 and 40 years old, and 66 percent of whom have college degrees.

This is the kind of information exchanged at the 12th Conference of International Book Fair Directors, which closed its four-day series of events this week in Guadalajara.

The conference is an independent gathering of international book fair organizers who work together to promote books, reading and the publishing industries in their regions and in other parts of the world.

The mission is to give these colleagues a chance to discuss ideas and challenges, share experiences and learn from each other in a supportive atmosphere. To participate, the fairs must have international profiles and be focused primarily on the trade, with attendance by publishers, literary agents, scouts, booksellers, wholesalers, and translators in their events.

As Guadalajara International Book Fair representative David Unger puts it, the book fair directors’ initial conversation included updates on each event’s progress since its last meeting in 2014 at Frankfurt.

The group then, Unger says, was on to debate about various topics, including

“Other ancillary issues discussed,” says Unger, “included Guest of Honor or Market Focus situations: problems and challenges; book fair to book fair partnerships; attracting talented team members and how to keep them; making partnerships with outside groups and institutions; and resolving conflicts of exhibition dates.

The 2018 conference location has yet to be announced. Book fair directors enjoy a meal together during their Guadalajara conference sessions.