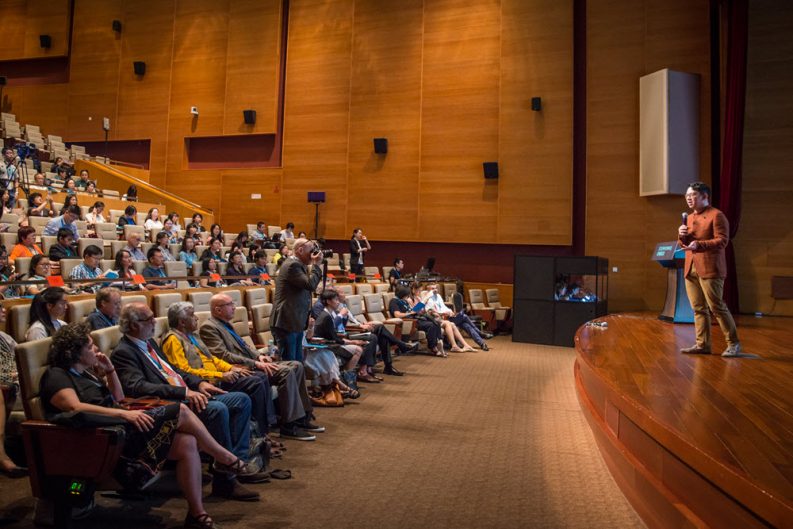 One literary agent’s story at this fourth iteration of the international conference was about selling 2,000 English-language titles into the Chinese market. Going the other direction? Not so easy. In this second of two articles on Beijing’s StoryDrive Asia 2016 event, we learn about case studies and exhibitions that highlighted both how much there is to know about “new regions” brought into focus by these conferences. Our first piece from Jing Bartz is here. And we hope you’ll consider joining us in November in the all-new Singapore StoryDrive Asia. — Porter Anderson

Two days before StoryDrive Asia 2016 began, Yingxin Gong, the conference organizer and director of German Book Office Beijing, had formulated a Plan B in case she might have to replace one of the speakers. Nazli Gürkas from Kalem Agency Turkey still had not received her Chinese visa, and time was running out.

But when Gürkas finally stood on the stage of StoryDrive, she didn’t mention her complicated trip from Turkey to China. Instead she shrugged her shoulders and said, “As a literary agent you need to be everywhere to get trends!”

Through StoryDrive, Gürkas was able to find the authors she’d like to invite to the Istanbul Tanpinar Literature Festival, as well as translation funding. Her agency’s success story attracted a lot of attention at the conference: In the last decade, Kalem has sold more than 6.000 Turkish book titles to other countries.

In another impressive instance, Jacky Huang, chief representative of the Andrew Nurnberg Agency, managed to sell 2,000 English-language titles into the Chinese market in 2015.

But the reverse—selling Chinese rights to the rest of the world—appears a lot tougher.

Surprisingly the problem hasn’t always been about “unfamiliarity with the Chinese culture.” Huang’s inside story on her large number of sales showed that although many Chinese writers are anxious about the idea that their books will be read in other languages, they don’t necessarily heed Huang’s advice on delivering a proposal in English seriously.

”They just send me their whole manuscript,” Huang said. “That’s all.” Michaela Röll could help. An independent literary agent, she’s associated with Petra Eggers Agency and recently settled in Beijing with her family. Röll’s topic in her comments at StoryDrive was titled “How To Find and Promote Bestselling Authors.” Almost by accident she discovered a young medical student when she was watching an online science slam. This young student had a gift for explaining sophisticated and academic things in an easily understandable and funny way, but she never had written a book, and was also busy completing her doctorate.

This became one of the most exciting case studies of StoryDrive Asia 2016: Röll had a big hit on her hands with this international nonfiction bestseller, “Gut: The Inside Story of the Body’s Most Underrated Organ.” The audience in Beijing learned that the title has attracted 39 rights sales, with 2 million copies sold in Germany and 1.5 million elsewhere.

How did Röll make it happen? Her “how to” tips inspired many participants at StoryDrive: A well-prepared proposal, for example, she told them, is even more crucial for selling books than the manuscript.

“Thirty to 50 percent of my time is spent on digital issues, even though the revenue was always below 5 percent. But I think it was, and still is, necessary.”Joachim Kaufmann, Carlsen

How much innovation is required in a digital age? “Design thinking,” as it’s called, may be one of the most innovative approaches.

Ulrich Weinberg, director of School of Design Thinking in Potsdam, visited Frankfurt Book Fair for the first time last year. Things happened quickly afterwards: He was invited as a speaker to StoryDrive in Beijing.

A few months ago, Weinberg ran a workshop with a group of bishops of the Lutheran church. The bishops were interested in design thinking, “because their work strongly focuses on words,” Weinberg said. “With design thinking, they learned new visual tools.”

And in another case of design thinking’s application, Joachim Kaufmann, Managing Director of Carlsen, the German children’s publishing company, told the audience in Beijing, “Thirty to 50 percent of my time is spent on digital issues, even though the revenue was always below 5 percent. But I think it was, and still is, necessary.”

Using the problem-solving, highly iterative methods of design thinking, he said, he developed and tested new business models for Carlsen. LeYo!, a learning app for children, is one of the successful results. Illustration was among the most popular exhibition components in Beijing’s event this year. Image: StoryDrive Asia 2016

Exhibitions as Well as Presentations

StoryDrive Asia 2016 in Beijing presented exhibitions including “Silk Road Gallery,” a show of illustrations. Curated by Hou Mingliang, founder of IlluSalon, the show’s 70 illustrated works were selected from 16 countries along the old Silk Road. Hou’s intention is to set up a platform for international illustrators, and help them explore their potentials in books as well as in video and ads.

“New Region” was another hit at StoryDrive Asia Beijing, most market players from those “new regions” having sharply limited knowledge of each other.

Many in the audience benefited from a “lecture for beginners” about the Brazilian market, presented by the publishing couple Rejane Dias dos Santos and Arnaud Vin of Autentica Publishing Group.

Peter Schoppert, President of the Singapore Book Publishers Association, warned people the audience not to be shocked if they went into a Singaporean bookshop and found different English editions of the same title. Rather than a disrespect for territorial factors, Shoppert said, the trend represents how open the Singapore market is.

“In this sense, it’s indeed no surprise at all,” announced Frankfurt Book Fair Vice President Claudia Kaiser, “that a new StoryDrive Asia will be held in Singapore in November.”

This region of “Hyper IP” and endless stories, clearly is ready for more of StoryDrive’s momentum.

More on the new, upcoming StoryDrive Asia in Singapore, which runs November 10 to 12 at the Sands Expo & Convention Centre at Marina Bay Sands.