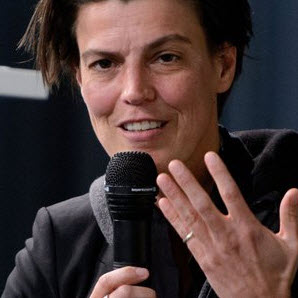 Lauded for writings that expose ‘how violence, hatred and speechlessness can change people,’ journalist and author Carolin Emcke’s Friedenspreis honors her work “in an era in which political, religious and cultural conflicts often leave no room for dialogue.’ The announcement was made by the Chairman of the German Publishers and Booksellers Association, Heinrich Riethmüller, at the association’s general meeting in Leipzig. The award ceremony will take place on the final day of the Frankfurt Book Fair, October 23, at the Church of Saint Paul and will be broadcast live on German public television.

The Board of Trustees said this about its selection:

“The German Publishers and Booksellers Association awards the 2016 Peace Prize of the German Book Trade to Carolin Emcke. In doing so, the association and its members have chosen to honor a journalist and author whose books, articles and speeches have made a significant contribution to social dialogue and peace.

“The work of Carolin Emcke pays particular attention to those moments, situations and issues in which discussions threaten to break down and communication seems no longer possible. In her highly personal and vulnerable manner, she regularly places herself in perilous living situations in order to illustrate – especially in her essays and reports from war zones – how violence, hatred and speechlessness can change people. She then uses analytical empathy to call on everyone involved to find their way back to understanding and exchange.

“Carolin Emcke’s work has thus become a role model for social conduct and action in an era in which political, religious and cultural conflicts often leave no room for dialogue. She proves that communication is indeed possible, and her work reminds us that we must all strive to achieve this goal as well.” Born on August 18th, 1967 in Mülheim an der Ruhr, Emcke lives and works in Berlin as a freelance journalist.

From 1998 to 2006, Carolin Emcke worked as a journalist at Der Spiegel. Starting in 1999, she traveled as a foreign editor to several war-torn areas including Kosovo, Afghanistan, Pakistan, Iraq and the Gaza Strip. In 2004, many of her letters from the field were assembled to create her first book, Von den Kriegen: Briefe an Freunde, published by S. Fischer Verlag, and later by Princeton University Press as Echoes of Violence: Letters from a War Reporter.

From 2003 to 2004, Emcke was a Visiting Lecturer at Yaley, where she lectured in “Theories of Violence” and other curricula. In 2004, she began curating a discussion series called Streitraum (“Room for Argument”) at Berlin’s Schaubühne, a monthly event she continues to host. From 2007 to 2014, she worked as a freelance author for the German weekly newspaper Die Zeit, for which she published several essays and reported from Iraq, Haiti and the Gaza Strip. Since October 2014, she has been writing a weekly column in the weekend edition of Germany’s Süddeutsche Zeitung.

In October, a collection of her essays examining racism, fanaticism, and contempt for democracy will be published with the title Gegen den Hass (Against Hatred).