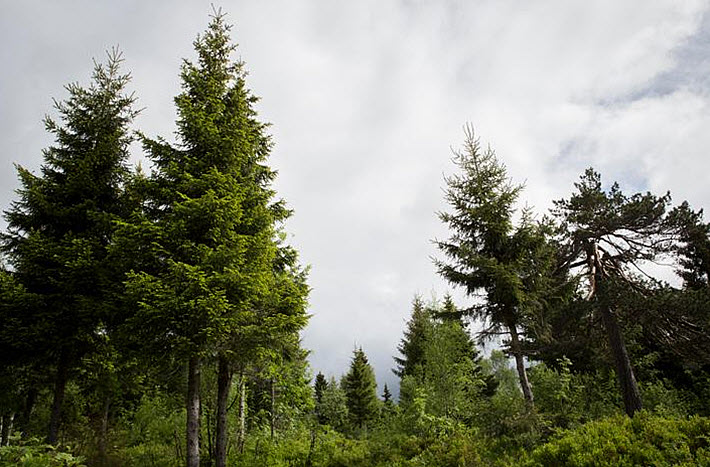 Author David Mitchell’s writings on ‘the theme of imagination and time, which authors can take in so many directions’ are entrusted to Norway’s Future Library project. ‘I Liked the Me That Believed in It’

Two years ago, Scottish artist Katie Paterson launched the Future Library (Framtidsbiblioteket) for the city of Oslo, a project described as “a 100-year artwork.”

A thousand trees have been planted in Nordmarka, a forest just outside the city, which will be used to supply the paper for a special anthology of books that will be printed in one hundred years. Between now and then, one writer per year is to contribute a text, so the plan says, with the writings held in trust, unpublished, until 2114.

Writing for The Guardian, Alison Flood reports on David Mitchell’s choice as the second contributor to the project, following Margaret Atwood, who last year contributed a manuscript entitled Scribbler Moon.

Here’s a video of Mitchell talking about the project and his participation. His first answer to what he thought upon learning about the invitation is “At first I thought, ‘That’s just mad.’ I write something and nobody gets to read it. I thought, ‘I’m not going to answer this.'”

Mitchell, whose contribution to the project is called From Me Flows What You Call Time, tells Flood at The Guardian: “It’s a little glimmer of hope in a season of highly depressing news cycles, that affirms we are in with a chance of civilisation in 100 years. Everything is telling us that we’re doomed, but the Future Library is a candidate on the ballot paper for possible futures. It brings hope that we are more resilient than we think: that we will be here, that there will be trees, that there will be books, and readers, and civilization.”

Mitchell also tells Flood that writing the book was “quite liberating, because I won’t be around to take the consequences of this being good, or bad…but I’m sandwiched between Margaret Atwood, and no doubt some shit-hot other writer [yet to be revealed]. So it better be good.

“What a historic fool of epochal proportions I’d look, if they opened it in 2114 and it wasn’t any good.”

Contributors to Future Library, chosen by a panel of experts and Paterson, can write in whatever form they like—novels or non-fiction, poems, short stories – and in any language. The only thing they’re asked, Flood reports, is that they don’t talk about their writing to anyone, and that they “deliver one hard copy and one digital copy” at a ceremony held in the Oslo forest.

Curator Lisa Le Feuvre, is quoted in The Guardian as saying:

“We have to trust that they have written—imagine saying yes, and then time running out. Nobody in your lifetime would know that you had just repeated the alphabet 100 times over. Does it matter if a writer is deemed lazy when they can’t hear the judgment with their own ears?”

Paterson herself asks only that writers tackle “the theme of imagination and time, which they can take in so many directions.”

“The project is a vote of confidence that, despite the catastrophist shadows under which we live, the future will still be a brightish place willing and able to complete an artistic endeavour begun by long-dead people a century ago. Imagine if the Future Library had been conceived in 1914, and a hundred authors from all over the world had written a hundred volumes between 1915 and today, unseen until now – what a human highway through time to be a part of. Contributing and belonging to a narrative arc longer than your own lifespan is good for your soul.”

The manuscripts are to be held in trust in a specially designed room in the New Deichmanske Public Library opening in 2019 in Bjørvika, Oslo. Intended to be a space of contemplation, this room – designed by the artist – will be lined with wood from the forest. The authors’ names and titles of their works will be on display, but none of the manuscripts will be available for reading – until their publication in one century’s time.