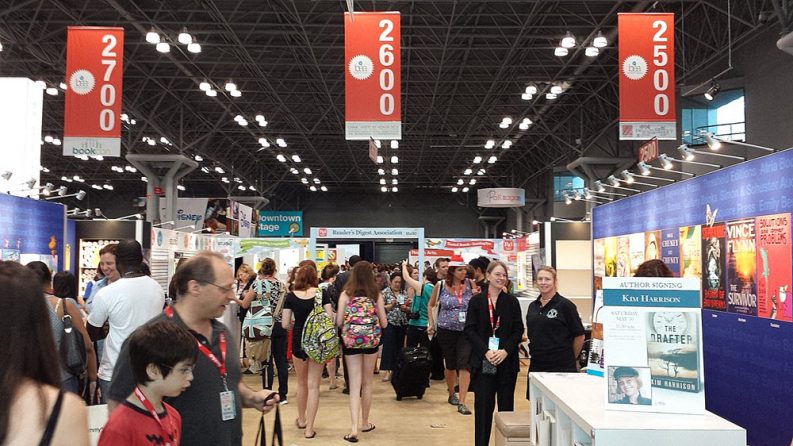 ‘Storytelling and pop culture collide,’ says the teaser on the New York Comic Con 2016 Web site. And that’s just the way these readers like it. BookCon steps off the BEA floor and heads for the fans. The significance is directional: ReedPop has announced this week that BookCon is going to be staged next at New York Comic Con, October 6 to 9.

Chicago’s BEA in May was the third annual and most recent doing of BookCon as a chance to bring consumers to the floor of the trade show. With BEA on its midwestern sojourn and the Chicagoans not as familiar with the event as New Yorkers are, the con was held on one day instead of the two it traditionally has offered in Manhattan.

Described by Claire Kirch at Publishers Weekly as a “literary amusement park,” the Chicago BookCon drew some 7,000 people, Kirch reports, “primarily females in their teens and 20s,” standing in long lines to collect souvenirs, see panel discussions, and engage in meet-and-greet events with authors. Queueing is huge at a BookCon, something many attendees accept as part of the fun.

At the Javits Center in New York (to which BEA will return next year), BookCon can attract a reported 10,000 per day for a two-day outing, and runs for two days. (Its dates in 2017 at the Javits are June 3 and 4.)

At Comic Con, the ReedPop team will stage a full four days of the show, the longest BookCon event yet.

And it’s hard to think of an event that has caused more handwringing and consternation from some in the industry than BookCon did in its initial appearances on the Saturday and Sunday after BEA in New York in 2014. Even at Chicago last month, one press manager for a major publisher told me that she’d “thankfully” be out of McCormick Place before BookCon came roaring in—happily on her plane back to LaGuardia.

Many in the trade have yet to feel comfortable with the swag-scavenging, celebrity-chasing tone of BookCon. That promotional language the program uses—”storytelling and pop culture collide”—is exactly what some in the trade fear is afoot here.

But as was debated at the 2015 Publishers’ Forum conference in Berlin—where BookCon chief Lance Fensterman laid out the rationale behind the populist approach—fandom is precisely what the trade has never been particularly good at nurturing. Precisely because the industry historically has kept its supply-chain partners closer than readers, the particular energy of fandom doesn’t come naturally to the traditional business.

There now are many efforts at many publishing houses to redirect the commercial approach to be more reader-facing. One such development just this week is the advent of the #HarperCollinsLive effort at the publisher’s Book Studio 16 page on Facebook. In this weekday presentation of authors interacting with readers in a loosely thematic structure—”Motivational Mondays,” “Temptation Tuesdays,” “Writerly Wednesdays,” “Truthful Thursdays,” “Free-For-All Fridays”—the idea is exactly what ReedPop know fans of all media want: access. In a prepared statement, Fensterman talks about the news of taking BookCon into his Comic Con (NYCC):

“BookCon@NYCC is a testament to the continued success of New York Comic Con as the Show grows beyond the Javits Center.

“We are continuously striving to reach new audiences and provide more of the programming and events that fans are looking for and the robust lineup of authors and events at BookCon@NYCC will allow us to do just that.

It’s a privilege to connect leading publishers and authors with throngs of NYCC fans and to unite two great New York City events for our fans to experience.”

Held in October at the Hudson Mercantile facility on West 36th Street in New York, Fensterman has told Publishers Weekly’s Calvin Reid that “traditional comics publishers aren’t part of the Hudson Mercantile” space, which will instead focus on “books (genre, novels, memoir, humor, etc.) and authors.”

The point Fensterman is making is that even as BookCon moves to a Comic Con context, it’s sticking to its bookish name as a distinctive dimension in counterpoint to the core of standard comics output.

In folding in the BookCon concept with Comic Con, you can get a glimpse of that “collision” language that Fensterman and the ReedPop team like to use: How do you fan the interest of the crowd with the news that you have authors—of books—coming into a comics festival?

Well you jump into your usual round of “Comic Guests” and “Entertainment Guests” and you add a new category: “Literary Guests.”