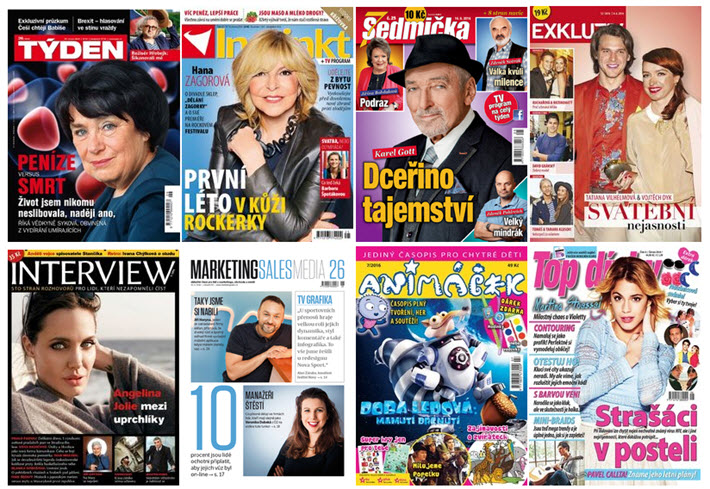 Television, radio, and magazines all are part of the promotional engine that the Czech Republic’s Empresa Media can put behind its new initiative to publish books. There’s a parallel here, of course, a big one. When the largest retailer of books and ebooks, Amazon, opened Amazon Publishing’s imprints, some worried that the sales apparatus that Seattle could offer them would create an imbalanced advantage for those titles. So far, however, Amazon Publishing hasn’t appeared to damage the prospects of established houses. And as Jaroslaw Adamowski shows us today, the Czech corporation Empresa enters the books market with an array of supportive media in place. — Porter Anderson

‘We Know the Tastes of Czech Readers’

Empresa Media, a.s., one of the largest Czech media conglomerates, has entered the country’s publishing market with the launch of its book division.

The company released its first three titles this month, and, under the plan, a further 15 books are to be published by the end of this year.

Czech businessman Jaromír Soukup, the group’s chief executive, said that he has long been planning to expand Empresa Media’s activities to the publishing industry with the aim to achieve synergy within its numerous fields of operation.

Soukup is quoted by industry news site Mediaguru.cz, saying, “The expansion to the book market is part of our plan for organic growth in our media group. Thanks to our online bookstore, we know the tastes of Czech readers and at the same time we have a number of renowned and experienced authors.

“This is why publishing our own books is a logical step for us.”

The group’s online bookstore, Knihy.Tyden.cz, currently comprises more than 171,300 titles released by almost 4,000 publishers, according to data from the company.

The store’s offer is dominated by:

Owning this popular platform could provide Empresa Media with a head start in its efforts to establish itself as a major player in the Czech publishing industry.

In line with its current specialization, Empresa Media aims to publish popular genre books, including children’s and teenagers’ titles, society books, plus lifestyle and history titles, released under the Young World, Seven Editions and Friend Editions imprints, according to Soukup.

That said, the company could face difficulties in expanding to the children’s and youth books segment following a merger which produced a major competitor earlier this year. As Publishing Perspectives has reported, in a springtime bid to strengthen its hold on the Czech children’s book market, local publisher Albatros Media a.s. acquired Danish consortium Egmont’s Czech operation, its leading rival in the domestic market. Albatros fields 12 imprints which publish books for children, youths, and seniors. Last year, it published 306 children’s books.

With its activities bolstered by the acquisition’s portfolio of prime global brands previously owned by Egmont—including Disney, Mattel, Hasbro—Albatros Media may be daunting competition to Empresa for a share in the country’s children’s books market.

In turn, Empresa Media could use its experience in publishing lifestyle magazines to gain a foothold in the country’s publishing industry.

The group’s first three books are: The group’s portfolio includes TV Barrandov; the country’s leading news weekly Tyden, with weekly sales of some 50,900 copies; industry publication Marketing Sales Media; as well as a number of radio stations and a portfolio of glossy lifestyle magazines. Empresa says it reaches 85 percent of the country’s population aged 12 to 79 through its media outlets, and is planning to use this to establish itself as a major player in the Czech publishing market.

Empresa’s TV Barrandov. according to data from Nielsen, is the third most-watched commercial television outlet in the Czech Republic, with a weekly viewership of some 5.09 million, or a share of more than 6.7 percent.

This makes the group the third largest player in the country’s media landscape, preceded by Nova Group and Prima Group, both of which reach as much as 96 percent of the Czech population through their media operations, as indicated by figures from local firm Medea Research. However, contrary to Empresa Media, the two groups don’t operate in the print media and publishing industries, which makes the Empresa conglomerate the largest Czech media group with a print presence.

Empresa Media says its intent is to distribute its titles through local retailer Bookretail, and the releases will be accompanied by a country-wide campaign carried out through TV Barrandov, radio stations Kiss FM, Beat FM, Country FM and Expres FM, and its portfolio of magazines.