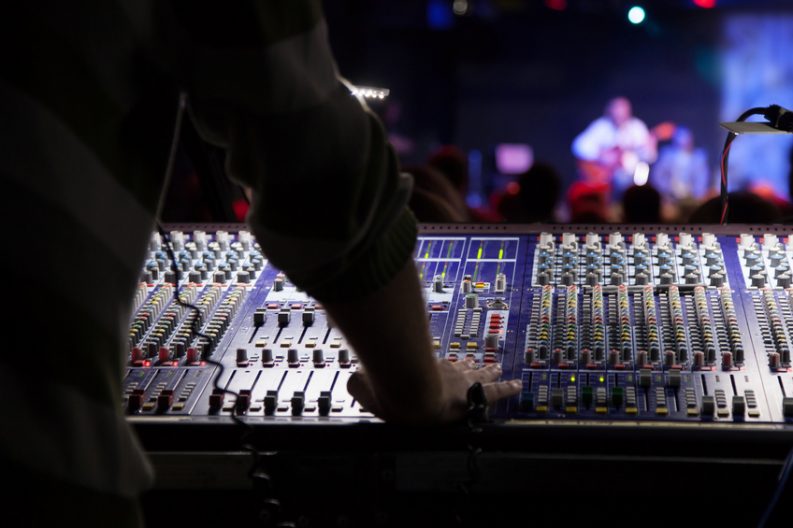 ‘We clean up the messes of data that are created by these digital services who are using music,’ says Audiam’s Euvin Weeber, who speaks about rights and royalties at our Rights Conference on Monday (June 13). The View From the Recording Studio When we talk about the future of book publishing, we often cite the demise of the music industry as an example of what might happen to us.

But as with books, some tales of the music industry’s death are not as dire as reports in various media suggest. There are new ways to monetize music and manage rights that are far more sophisticated than in book publishing.

Euvin Weeber, General Manager at Audiam, works in music licensing and—looking ahead to his participation in the June 13th conference—Rights and Content in the Digital Age, Weeber talks to us here about the complex world of music rights. He puts forward some reasons why popular musicians and bands avoid streaming services—perhaps similarly to writers avoiding subscription service. And he talks about the sophistication of rights-tracking systems, with an eye to why partnering with big companies can sometimes mean a devaluation of content for corporate gain.

Publishing Perspectives: Can you tell me about your company and what it does?

Euvin Weeber: Audiam is a music royalty collection agency for the digital age. We audit, collect, and distribute interactive streaming royalties, also known as “mechanicals,” and YouTube royalties. Most importantly we clean up the messes of data that are created by these digital services who are using music and make sure that our clients are paid what they are owed.

PP: How do the different digital music platforms—YouTube, Spotify, Apple Music—use music? And what copyrights are they using?

EW: In the music industry, copyrights are split into two different broad types:

The largest uses of music in the digital world are:

We’re focusing here only on the first two of these services, interactive streaming services and YouTube.

YouTube operates under what’s called a “synchronization license” in which each rights holder—master rights and publishing rights—issues a license allowing for their copyright to be synchronized to a moving image. This is the same license type used when a piece of music is used in a television show, a movie, or a commercial.

The interactive streaming services issue what is called a mechanical license to the publisher for the use of their copyright. The royalties that are issued are called “mechanical royalties.” The origin of the term mechanical royalty comes from when music was reproduced mechanically—whether in jukeboxes, vinyl, CDs, etc.—and the term has been carried over to the virtual world.

PP: How does the money work for songwriters in YouTube as opposed to the situation with Spotify?

EW: YouTube has created an intricate B2B site, a content management system (CMS) in which the master rights, and publishing rights-holders of the world can log in to manage their own catalogs of copyrights.

The lynchpin of this system is a fingerprinting technology they call Content ID. With Content ID, a master rights-holder will upload a sound recording that they control, and then Content ID will scan the entire YouTube universe for uses of that recording. In the CMS, uses of this recording are recorded on a virtual “index card” that represents this specific sound recording. Stapled to this index card, is another index card that represents the publishing rights to this song. So every time the fingerprinting tech finds a use for that specific recording, the master rights-holder and the publishing rights-holder are both paid.

Ninety percent of revenue for the use of music in YouTube is derived from advertising.

YouTube employs an extremely sophisticated method of selling advertising not on specific videos, but targeted to the various demographics watching videos.

Let’s say the Whitney Houston recording of “I Will Always Love You” is used in two different videos. One video features cats wrestling and is mainly watched by females between the ages of 12-25, while the same song is used in a video of monster trucks crushing cars and is watched by males between the ages of 35-55. So even though it is the same piece of music, the rights-holders will actually be paid different rates on both of those videos dependent upon how much YouTube’s advertising clients were willing to pay to reach each demographic.

As mentioned before, interactive streaming services issue what are called mechanical royalties. That means that for every usage of a piece of music, the publisher receives a payment for each and every play of that music.

Prior to the advent of streaming models, music was being downloaded largely through iTunes. For downloads of a recording, the publisher is also a paid a mechanical royalty. The difference between download mechanicals and interactive streaming mechanicals is that for the download of songs there is a set rate of $0.091 paid for each download. This rate was set by the government.

For interactive streaming mechanicals, there is no set rate-per-stream. Essentially what happens is that on a monthly basis, Spotify will take their monthly revenue for the given month—let’s say $1 million in a single month—then they will divide that $1 million by the total number of streams of every single recording in their system. And that’s the royalty rate per spin for that month.

PP: Why have a number of artists including Taylor Swift and Adele chosen to keep their music off of Spotify?

EW: There are a few reasons for which artists have chosen to keep their music out of Spotify.

First, songwriters make a lot less money for streams of their music [as opposed to what they make] in music sales. As mentioned before, the rate that a songwriter is paid for each download of a single song is $0.091 per download. The average per stream is about $0.0008 per stream.

The theory is that by keeping their music out of the streaming services such as Spotify, it’s driving the consumer to go and actually purchase the album. This works much better in regards to larger higher profile artists, while smaller artists are usually just trying to get exposure and prefer to have their music on Spotify. They won’t make any money from it, but still [potentially can build audience].

Another reason some artists have taken their music out of Spotify is what is called the “free tier.” Spotify offers their service to users free. For streams from users of this free tier, the rights-holders are asked to take even less money, basically giving it away.

Spotify’s claim is that the free tier is their main way to get people to sign up for their premium tier.

The rights-holders say it basically devalues their rights, while pumping up Spotify’s market share. Euvin Weeber will be speaking at Publishing Perspectives’  Rights and Content in the Digital Age conference on June 13, Grand Hall at the NYU Kimmel Center in New York City. The conference hashtag is #pprights16. Tickets are available here.