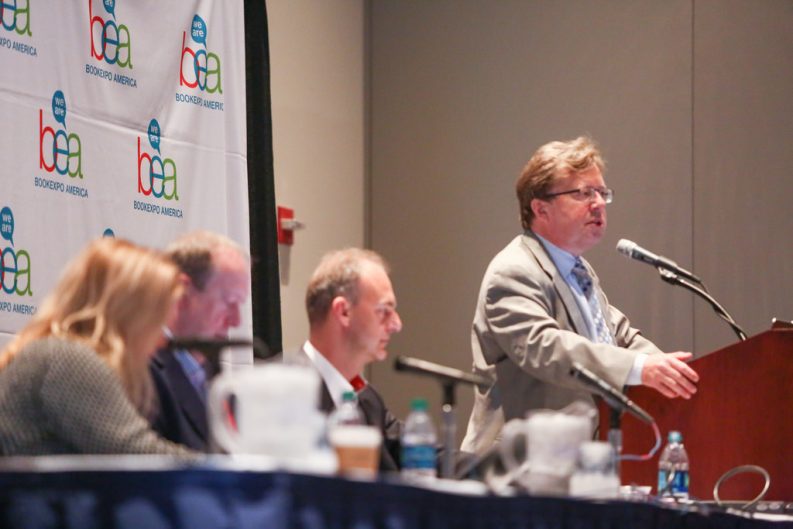 Opportunities and challenges in Poland’s publishing market are under discussion this week at BookExpo America. Recently: a decision against fixed pricing. Information presented at BEA makes comparisons of publishing market values for 2013, as specialists report that Poland has suffered a significant decline in readership amid competition from new media. Image provided by Włodzimierz Albin.

‘The Polish Market Is Relatively Young’ A series of events at BookExpo America (BEA) this week in Chicago focuses on Poland, the trade show’s 2016 Global Market Forum Guest of Honor.

Wednesday (May 11), one of the first conference sessions of the three-day expo was called Poland’s Book Market: Insights, Trends and Developments, and was designed to lay some groundwork for BEA attendees about the makeup and nature of Poland’s contemporary publishing scene.

In a presentation from Włodzimierz Albin, President of Wolters Kluwer S.A. in Poland and President of the Polish Book Chamber (or association), several trends came to light, including:

This week and in coming months, many in the international publishing community will become more familiar with features and factors in Poland’s market. The nation is not only BEA’s Guest of Honor this week but is one of seven regions highlighted on October 18 in Frankfurt Book Fair’s The Markets: Global Publishing Summit. And Poland then will be London Book Fair’s Market Focus in spring 2017.

Pivoting on a Fixed-Price Proposal

Poland’s parliament has decided to scrap a proposal to introduce fixed prices for new book releases in a bid to support smaller bookstores.

While the proposal was submitted as a petition by an anonymous citizen, the measure was supported by the Polish Chamber (PIK), which drafted a bill under which new releases would have had fixed prices for 18 months after publication, with an exemption for ebooks.

The petition was introduced on December 22, 2015, after which it was published on the parliament’s website.

According to the petition, large retailers sell books at prices at significantly lower prices than those charged by bookstores. Furthermore, the petition stated that some major bookstore chains are able to make special advantageous agreements with publishers. Bookstore chains, the petition asserted, may get as much as a two-week lead in offering new releases, thanks to such deals.

In March, the Polish parliament’s petitions committee made a decision not to accept and pass the petition to a relevant committee. This scuttled the fixed-price effort.

The association’s position had been that its bill, based on France’s Lang Law, had the potential to increase readership by ensuring popular access to books throughout Poland, and making the country’s publishing offer more diversified.

Albin has spoken in the past of a need for increased efforts by schools, parents and the media to promote book readership; combat piracy by amendments to the Polish law; and maintain a strong, healthy network of bookstores, also outside larger cities.

“This third point can’t be implemented if we don’t protect independent bookstores against unfair competition which pushes them out of the market,” Albin has said. As it happened, however, after the October 25 parliamentary election — which paved the way for a new government by the conservative Law and Justice (PiS) party — the draft bill lost sufficient political support to be endorsed by the majority of Polish lawmakers.

According to Weronika Murek, who is a writer, playwright and author of the award-nominated collection of short stories Growing Southern Plants by the Michurin Method (Uprawa roślin południowych metodą Miczurina), it’s difficult to say whether such a measure actually would have brought benefits to readers and smaller bookstores.

“Above all,” Murek said to Publishing Perspectives, “I think that books are too expensive. This regulation would be useful if it resulted in setting prices at online levels,” or some 20 to 30 percent below print prices.

“Maintaining the print price,” Murek said, “which includes the profit margin of large distributors, such as Matras or Empik, won’t have a positive impact on book sales and, as a result, on book readership. This is why it is difficult to evaluate the draft regulation according to the available information.” Until pricing levels could be determined, it was unknown whether fixing them would help.

In one of the most interesting slides of Albin’s presentation at BEA this week, we see a comparison of print and ebooks in Poland, the USA and the UK. Thirty-nine percent of the Polish book market, Albin’s report tells us, is fiction and non-fiction, with 23 percent in the children’s category and 10 percent in travel books.

Much more information on challenges and opportunities in Poland’s re-emerging publishing market is ahead as more events play out this week in and around BEA in Chicago, then in Frankfurt and London.

One of the key points for Western industry observers to remember that, as Albin noted in his presentation, the Polish book market is only some 25 years into its development since Soviet domination ended.

“Compared with most countries worldwide,” he told Wednesday’s audience, “the Polish market is relatively young. We have neither large, traditional family publishers, nor large media companies.” The May 11 “Insights, Trends and Developments” panel on Poland’s book market at BookExpo America. Image provided by BEA