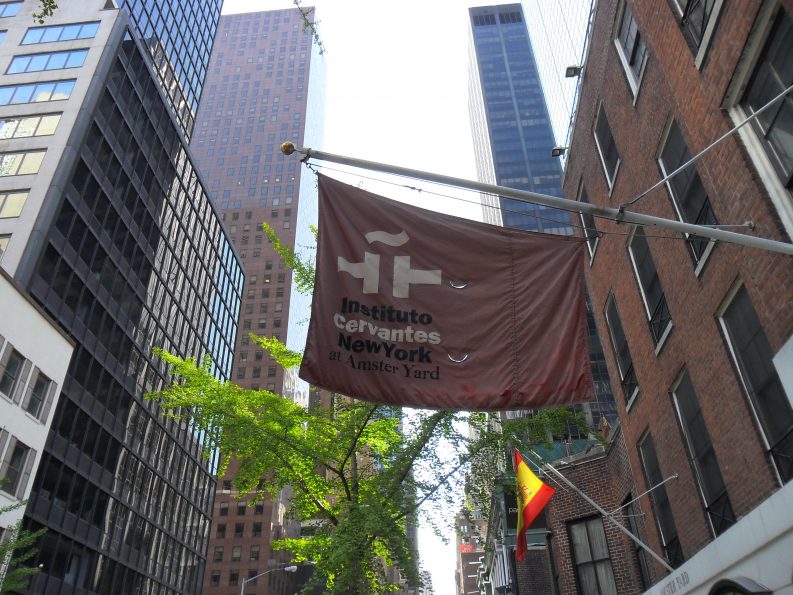 For “such an international country,” says author Lydia Cacho, the US market is under-served with books in translation, especially non-fiction. The venue for the PEN America World Voices Festival session on non-fiction was the Instituto Cervantes in New York City. Image: Lena Prisner

A BEA programming note: In her writeup for us today, Lena Prisner mentions the 3-percent figure in traditional estimates of translated material in the US market. It’s the basis for the Three Percent literary site run by Open Letter Books’ Chad Post, who speaks at BookExpo America (BEA) on Wednesday at 3 p.m. CT / 20:00 GMT in a session titled “Why *Poland? Why Now? Strategies for Promotion of Polish Literature in the US.” Post also is a key player in the Best Translated Books Award, and you can see our report on those prizes here. — Porter Anderson

‘Run and Get More Books’

At this year’s PEN World Voices Festival of International Literature, a panel at Instituto Cervantes in Manhattan discussed a topic that’s both relevant and problematic, the translation of non-fiction.

A figure passed around the publishing world for quite some time now is 3 percent – supposedly the proportion of translated literature on the American publishing market. While that number is sadly low for those who appreciate translated work, it’s thought by some to be optimistic.  One of this night’s panelists, Lydia Cacho, a journalist and human rights activist from Mexico, estimated that number to be as low as 0.4 percent.

All such figures are educated guesses, of course. But this perspective generates several questions. For example, why should so much international literary be filtered out? How do publishers make these choices? And what influences their decisions to either publish or ignore a work of non-fiction? A gratifying example of international non-fiction that’s been published in America is Cacho’s Slavery Inc.: The Untold Story of International Sex Trafficking (Softskull Press, 2014). Following the book’s appearance, she says, she has received repeated death threats.

As Cacho describes it, several translators have made attempts in the past to put her text into English, but none of the results were satisfactory. “Beth is the first who actually gets what I’m saying,” she says, referring to the book’s translator, Elizabeth Boburg. In the French version of her book, for instance, Cacho says that the text doesn’t effectively reproduce the spirit of her narration.

As a New York license attorney who has been working as lawyer and translator in Spain and Mexico for the past 15 years, Boburg says she knows the frustration of not getting a translation published. Of the three books she translated prior to Slavery Inc., none has been published — even though, Boburg stresses, they were all interesting works.

Her guess on why Slavery Inc. — unlike many other works of non-fiction in Mexico — has succeeded in being published is that the topic is timely and the quality of the report is high. But so many essayists and non-fiction authors in Mexico cover matters just as important — sometimes at great risk to themselves — and yet are unread in English. Instead, you can read books about going on vacation in Mexico and the wonderful food the country offers, Boburg says. What drives publishers to think that American readers are more interested in the entertainment factor of a country than in such serious matters as corruption, violence, abuse 0f women and children, pollution or human trafficking?

Cacho says she thinks that publishers underestimate the American readership, assuming that US consumers won’t be interested in international literature. “America is such an international country, and yet that internationality is not represented in the literature that gets published,” she says.

The Mexico City-based British translator Sophie Hughes says she thinks that “feeding the readers what they want” doesn’t have to be a disadvantage to international literature, but that it’s about emphasizing the story behind non-fiction topics. “In the end, everyone wants a story,” Hughes says.

Based on her own experience, Cacho says, that’s something she can confirm. She recalls several book presentations she has given in which a publisher brought only a small number of books and chairs, expecting nobody to show up. “But I had a huge audience, clearly interested in the topic, embroiling me in an interesting discussion,” she says.

“They had to run and get more books.”

The general consensus of the panelists was that international non-fiction (as well as fiction) needs to be better integrated into the American publishing world, and that publishers would do well to rethink their assumptions about their readership when it comes to international literature.

*Poland, Global Market Forum Guest of Honor at BookExpo America this year is also one of the seven featured nations/regions of The Markets: Global Publishing Summit on the eve of Frankfurt Book Fair, October 18.