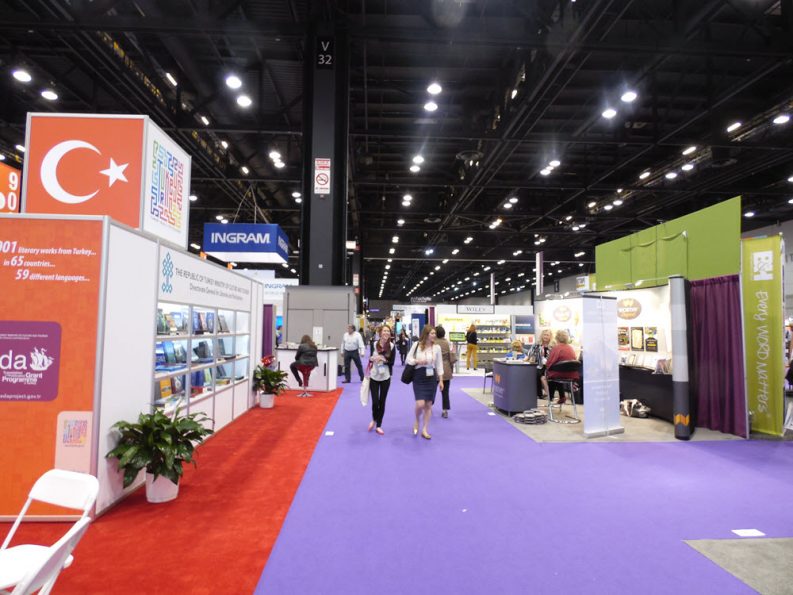 On the show floor, the crowds and booths are down. In one unusually frank exchange, however, this BEA finds traction on issues of publishing and its writers. ‘Tumbleweedy,’ one journalist colleague has called the Chicago BEA that closes Friday (May 13). Image: Porter Anderson

In what may be BookExpo America’s (BEA) most forgettable outing in many years, Chicago’s McCormick Place seems a Fringe alternate to New York City’s Javits Center.

“Yesterday, it was really tumbleweedy,” a fellow journalist says, pointing out that the main exhibition floor has a lower silhouette. It’s a pedestrian prairie this year, with not much “skyline” where the big houses’ pavilions should be. Those bright carpets aren’t getting very dirty. Even the Starbucks line is almost manageable most of the time.

This year’s floor space, as Publishers Weekly’s Rachel Deahl reports in the show daily, is said to be down only 20 percent. That seems conservative. Many talk of how little time it takes to walk the expo area. There are broad open spaces only an aerobics instructor could love, especially around the Digital Zone stage where some events on Thursday were playing to fewer than 20 people. As Michael Cader at Publishers Lunch aptly puts it, “The ever-diminishing ‘digital discovery zone’ is rather unpopulated and undiscovered, making it perhaps the saddest place on the floor.”

Elsewhere at BEA, upbeat comments sometimes sound Pollyanaish, for example, when colleagues turn up and chat in the aisles because their companies didn’t buy booths this year. The encouraging observation is that conversations seem less hurried; more frustrated fair goers might say that’s because there are fewer meetings to be had.

Spin, Here and Over There

Through no one’s fault, really, the presentation thus takes on an air of glass-half-full cheer, a bit like the messages from the UK’s Publishers Association this morning, announcing that “sales of physical books from publishers increased for the first time in four years,” while the actual increase is 0.4 percent or “£2,760 billion in 2015 from £2,748 billion in 2014.”

No one wants to take away from the pleasure of hearing that print in our sister market is up for the first time in four years. But four-tenths of a percent? That actually doesn’t seem as robust a jump as recent talk of a “print resurgence” — both here in the States and in the UK — might have led some to expect.

By contrast, the UK report is telling us, “Digital sales were down 1.6 percent to £554 million in 2015 from £563 million in 2014, which was the first drop in seven years, when such sales were first recorded.” And that, frankly, may not seem as big a slowdown as some might have expected in digital.

As Benedicte Page reports at The Bookseller, these are only two of many data points in the Publishers Association’s Statistics Yearbook for 2015, which shows a 1-percent overall increase in sales, per invoiced value.

And the UK’s edition of this trade show, London Book Fair, was held at full strength and size last month, of course, and these new figures from the other side of the Atlantic aren’t immediately germane to the Chicago BEA fair floor. But what lies in common between the presentation of the new UK numbers and the McCormick Place West trade show closing today is that tone of determinedly smiling spin.

And much of the programming has seemed similarly airish. Nobody’s fault. Here are good spirits all around, friendly collegial discussions as usual on a range of topics. But since Tuesday’s contentious news conference about the IDPF-W3C merger, the “conference” elements of this year’s show have seemed a bit tame.

To “Invite a Much Greater Family of Authors’

One session Thursday (May 12) stood out, having leveraged the comparative laid-back tone of this off-year, off-road BEA to promote a serious discussion about Authorship in the Digital Age, sponsored by Copyright Clearance Center. Key credit goes to Jon Fine, formerly with Knopf and Amazon and today an even-handed moderator whose deep experience bridges the trade and indie movement without triggering rancor. In opening the session, he explained that he was there at the behest of the Authors Guild, and those who know the backstory on a couple of his panelists might have expected a less productive panel.

Fine was joined by Joe Konrath, an iconic self-publisher and, at times, sharp critic of the Guild; Scott Turow, seen by indies as at times an industry apologist while he was president of the Guild; and Barbara Freethy, the biggest seller of the Kindle Million Club, with some 6 million books sold as an indie since she left trade publishing.

Straightforward but friendly, this trio pulled off a difficult thing: an explication of their views that pointed up more fellow-feeling than differences. These three writers are so successful, each in his or her way, that they have little need to proselytize or argue one path to publication over another. The real hope in this hour was that the conversation might finally be maturing to a point that representatives of different models can generally respect each other’s points and share some common ground. Turow, now 67, talked of “having the experience of having my publisher basically try to suppress sales of my book,” when the editor of an early title, One L, fell out of favor. “So I’m sensitive to both sides of this.”

He also told us that his daughter, Eve Turow Paul,  has had some success with her self-published A Taste of Generation Yum: How the Millennial Generation’s Love for Organic Fare, Celebrity Chefs and Microbrews Will Make or Break the Future of Food.

“I don’t think one way is right and one way is wrong,” Turow said, emphasizing that he has been incredibly lucky.

Konrath, in announcing that he was in agreement with Turow — and prompting a funny “Oh, come on, guys!” from moderator Fine — made the cogent point that “Most of us don’t get that invitation to the big show,” as Turow was. “If I had the choice to win the lottery, I’d take it,” he said. But the implication of a choice, he said, is where he saw things differently from Turow. So few get that choice to work in the traditional corridors of the industry.

“If we’re lucky, we get a boilerplate contract,” Konrath said, “and have to fight for my rights back.” As opposed to the life-plus-70-years contract terms, he said, his experiences with translations of his work with AmazonCrossing is contracts of seven or nine years, far more author-friendly terms than the trade typically may offer.

While he has seen $80,000 months in self-publishing, Konrath said that initially, “I was just as clueless as anybody” about independent publishing, believing that what he would do was “lead readers to my real books” while having to self-publish under three pen names because his publisher wouldn’t allow him to produce work off-contract.

“Don’t confuse goals with dreams,” Konrath said in one of the high points of the session. “Self-publishing is a goal. Becoming Joe Konrath or Scott Turow or Barbara Freethy is a dream.” Freethy, who joked that she’d learned her books sell when there’s a body of water on the book cover (and there always is one), estimates that she has made “about 100 times more” in self-publishing than she did with a strong round of trade-published novels, since going entirely independent several years ago.

Warning that “Indie publishing is hard work, you have to wear every single hat,” Freethy took a moment to praise the retailers who work as partners with independent authors, enabling their success.

She talked about her arrangement with IngramSpark which gets print editions of her books into bookstores — still not an easy feat for indies — and revealed that she works now without a literary agent, basically hiring only a foreign-rights agent.

Konrath had a good simile in that regard: “An agent is like a really good hunting dog. You can hunt without one but a good dog will bring you more game…An agent should bring in enough money for you to cover” 15 percent that agency may cost, but is a valuable partner. And Turow, who talked of his high regard for his agent, Gail Hochman, noted that in the trade, the agent plays a curatorial role for the industry now.

The most striking comments of the session would come from Turow, who said, Publishing will survive publishers. “They’re trying to do their best but they’ve been tone-deaf.” He told a rueful joke about complaining to his publisher once, “You don’t even know who reads my books,” as Amazon tracks its customers, only to be told, “But other publishers don’t know that, either,” as if that excused data-ignorance.

More and more, publishers Turow said, “deliver less and less” of the very services and quality that make trade publishing attractive to authors, and publishers thus are killing themselves by retreating. He called for a universal license that would bundle all formats of a book into a sale: “If publishers had figured out how to do that, they’d have an enormous advantage.”

At a BEA that will be largely unremembered except for its small size and cottony softness, we’d heard sharp observations and hard truths. It was good to feel some trade-show traction in the issues, if only for an hour.

The UK is one of seven regions highlighted this year at Frankfurt Book Fair’s The Markets: Global Publishing Summit on October 18.