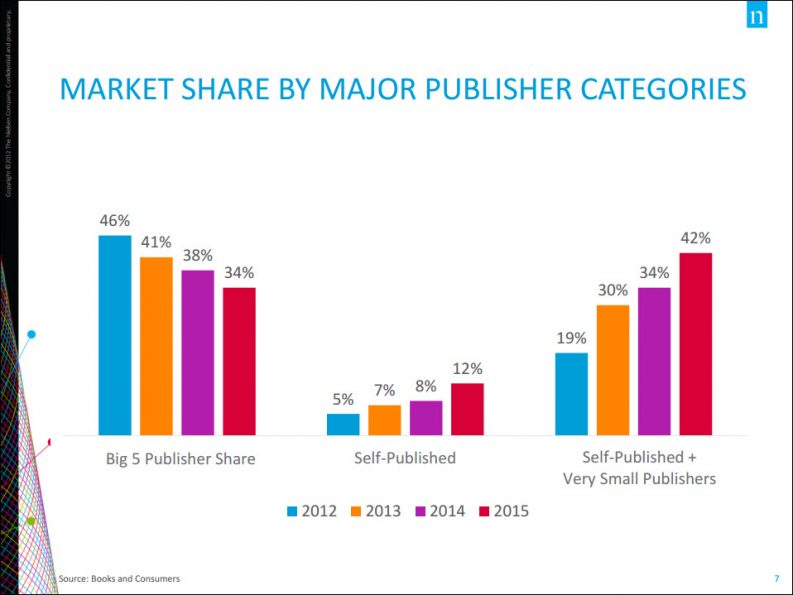 From some of the material presented at BookExpo America, views of the US market courtesy of Nielsen Book and Kempton Mooney: So far, it’s a great year for Dr. Seuss. Again. One of the hallmarks of current major trade-show programming is the stacking of events into the same time periods. Somewhere along the way, deliberately over-scheduling these events became annoyingly fashionable. Each hour has several “conference” sessions in BookExpo America (BEA) terminology, “insights seminars” in London Book Fair’s lexicon. A lot of them are informative, engaging, important. Almost all of them conflict with something else on the schedule. Good events are forced into unfair competition with each other. “Something for everybody” turns into “everything for nobody”: You always miss an awful lot.

One of the events some folks missed at the Chicago BEA last week, for example, was a presentation at noon on May 12 with Nielsen Book Senior Director of Research and Analytics Kempton Mooney.

The session was called Beyond the Obvious: Uncovering Some of the Most Under-Recognized Book Markets in the US with Nielsen. The session’s description referred to opportunity-laden markets beyond New York, Los Angeles and Chicago.

“In these places,” the session blurb told us, “a little smart marketing can go a long way. In this session we’ll twist the lens a little to look at some of the most under-recognized books markets in the US for a range of key categories including Children’s Books, Christian Fiction, Romance, and Adult Non-Fiction. Along the way we’ll make some surprising discoveries that prove the point—sometimes opportunities are not where you expect, and you’ll never know unless you look beyond the obvious.”

We’ve asked Mooney to provide us with some of his slides, and he kindly complied with an abridged edition of his deck.

Here is a quick sampling of visuals from his presentation. The chart above is interesting for its introduction of ebooks not in 2007 when Amazon introduced the Kindle (in the latter part of that year) but in 2010. This helps explain why the initial adoption rate seemed to escalate and rush forward so fast: it’s all happened in a very compressed time span. (Do remember that no one, not even our good friends at Nielsen, know how many ebooks there are in the market. Many are not registered in any way that Nielsen can track and Amazon and other online retailers decline to share sales numbers.) If trade shows drew more independent authors than they do, the above chart might have gotten Mooney chased out of the building. While it shows good, respectable growth for self-publishing, only when coupled with “very small publishers” do the numbers on the indie side start to present the kind of presence that many of the evangelists of self-publishing assert. Nevertheless, the decline Nielsen is depicting in Big Five share is some 12 percent between 2012 and 2015. That’s significant. Notice in the chart above that the growth is in adult non-fiction and fiction. There’s the juvenile slowdown we’ve heard about, credited to—or blamed on—the lack of a Hunger Games blockbuster.

Let’s look at one more. According to what Mooney is showing us about the trade market’s leaders for 2016 through March 17. Dr. Seuss is cleaning up, or maybe Tidying Up, with five of the 20 entries.  Notice that the fourth of the Top 20 is a coloring book. A Harry Potter coloring book, yes, but a coloring book. Why read what you could color?

Lots of room for stronger stuff in the remainder of the year.

Our thanks to Kempton Mooney for sharing some of his slides.