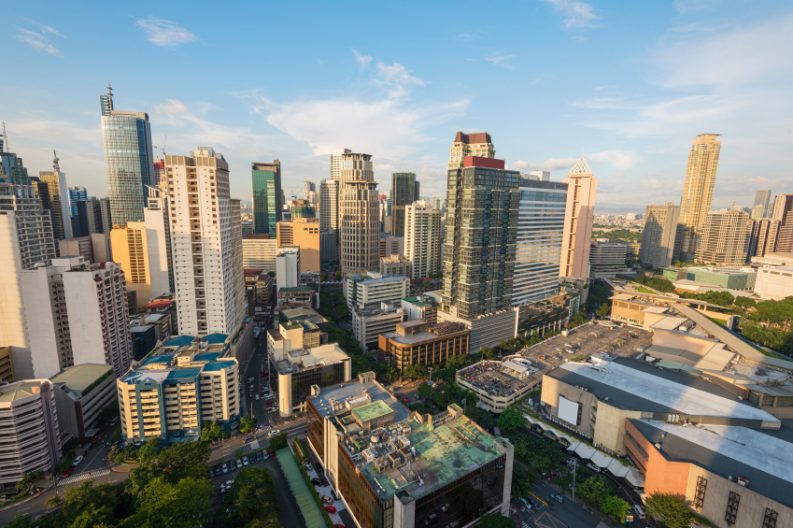 With a 96-percent literacy rate reported in 2015, and a young population engaged in narrative, The Philippines is a study in contrasting opportunities and challenges in the lineup of The Markets: Global Publishing Summit in October at Frankfurt. Makati, the financial center of The Philippines, is one of the 16 cities of Metro Manila. Image – iStockphoto: fazon1

A reminder: If you’re interested in entering the WildCard competition for a free stand at Frankfurt Book Fair 2016, today, May 31, is the deadline for your three-question application. Information and online submission form are here.

Median age 23.5 in an Island Nation

Among the seven outstanding publishing regions spotlit in The Markets: Global Publishing Summit (#themarkets2016) on October 18, The Philippines brings a distinct element of youth and energy to the conference. One prime example of this is in the fact that the country is second only to the United States in visitors that Wattpad receives each month. Of Wattpad’s 45 million monthly users, Filipinos account for between 5 and 7 million.

According to Index Mundi statistics for 2014 based on the CIA World Factbook, in fact, The Philippines’ median age of 23.5 years includes a 15- to 24-year-0ld sector that makes up just under 20 percent of the population, compared to 13.7 percent in the States and 12 percent in the UK.

As we’ve written earlier this year in Flirting With New Readers in The Philippines, Wattpad’s success there is so robust that its users avidly support a production agreement with TV5 Manila for a television series, Wattpad Presents.

Summit Media’s imprint Pop Fiction Books is a leading producer of the audience’s favorite stories in digital and print editions.

And in a brand-new report from Wattpad’s headquarters in Toronto, we get an idea of the scale of this reading-viewing symbiosis:

To date, Wattpad Presents has aired nearly 265 episodes comprising nearly 65 original Wattpad stories. The show has reached more than 2 million viewers with an average audience of 1.6 million per episode. Through the popularity of Wattpad Presents, TV5 has already seen a 30-percent jump in total viewership year-over-year from 2014 to 2015, including a healthy increase from the elusive teen market, 12.6 percent of which the show has captured.

Mobile, and Big on Social Media

Like the other six regions in The Markets conference at Frankfurt’s Business Center, The Philippines will be examined with analysis of its place in the world of publishing; a look at the vision of its literary and commercial ethos; and special networking opportunities with leading business players in the region. This combination of informational presentations and on-site, face-to-face networking sets off The Markets format among its major sister world publishing conferences. “In addition to the use of self-publishing platforms, domestic experts such as Graciela Mendoza Cayton, Executive Director of the National Book Development Board, see further growth potential in the online sector.

“Excellent underlying conditions support this prognosis: In 2015, the 7,000-island nation reported a mobile market penetration of 101 percent (Germany: 133 percent), and 36 percent for the Internet. What’s notable is that Internet users spend an average of 6.2 hours online per day, with 96 percent being equally active on social media…

“In terms of book production, the Philippines is lagging behind most nations in the Asia-Pacific region; in fact, per capita it comes in last in the world. According to the National Book Development Board, only some 1,000 authors, 50 illustrators and 400 publishers are registered in the country, with its 100-million-strong population.”

Filipino based on Tagalog is the first official language, English the second, and almost 40 percent of the population is school-age, according to The Markets team. One speaker at Frankfurt in The Philippines portion of The Markets will be Karina A. Bolasco, Publishing Manager of Anvil Publishing and a board member with the Philippine Board on Books for Young People.

Bolasco says that the high cost of paper imports, heavily taxed, combines with inadequate distribution channels, a shortage of bookstores, and insufficient support for book marketing in creating a challenging environment for book publishing in The Philippines.

But she points to the close association of the island nation with the States, which colonized it for some 47 years, until the end of World War II.:

“First and foremost,” Bolasco says, “we’re a large consumer market for English-language books, particularly from the US and Great Britain. US publishers see us as an extension of their market because we read in English.”

And the Filipino readership is also growing, Bolasco says, adding that Anvil is strengthening its commitment to promoting domestic authors and literature.

The setting of The Markets, presented in association with Publishing Perspectives on the eve of Frankfurt Book Fair (October 19-23, #FBM16) is Buchmesse’s highly popular Business Club (#BC2016). Early Bird discounts of 20 percent continue. Last year’s iteration of the Business Club drew some 3,200 club members from 50 countries with more than 1,200 meetings reserved online and more than 70 events held in the club, itself.

Special Early Bird rates for The Markets conference are available until August 31.

In addition to The Philippines, The Markets 2016 will bring its targeted presentation style to: