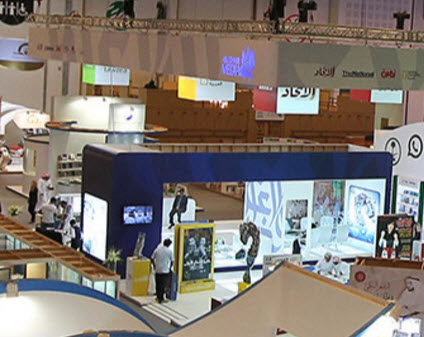 Amid the hustle and bustle at the Sharjah Children’s Reading Festival, the emirate’s Book Authority offered more information about Sharjah’s publishing free zone. If the concept of Sharjah’s forthcoming “Publishing Free Zone” is new to you, here’s its elevator pitch: “Sharjah Publishing City is the Arab world’s very first publishing free zone, offering those in the book industry the opportunity to capitalize on tax-free privileges while benefiting from being a wholly independently owned and operated company.” And Book Authority chief Ahmed bin Rakkad Al Ameri is telling us that the zone becomes a reality before the end of this year. — Porter Anderson

UPDATE: As of late June 2016, the name of the UAE’s planned free trade zone for publishing has been changed from Sharjah Book City to Sharjah Publishing City to reflect an expansion of its media interests. This article has been updated to accommodate that change. — PA

Update on ‘a United Nations of Publishing’ Last year, at the Sharjah Children’s Reading Festival, Publishing Perspectives learned about the emirate’s plans to create what has become known as Sharjah Publishing City.

“The Sharjah Book Authority promises to oversee a ‘publishing free zone’ in the United Arab Emirates, [to] include a printing press which the emirate hopes will offer Middle Eastern and African publishers access to superior printing technology…as well as providing European publishers an alternative to printing in China or India. In addition, the Authority also aims to become the Middle East’s largest book distribution company.”

In the Book Authority’s material, the Publishing City description reads, in part:

“Sharjah Publishing City will cover approximately 20,000 square meters and comes equipped with all the latest technology the business owner needs to be successful. This includes high speed broadband, conference rooms and secretarial services. There will be a choice of furnished or unfurnished offices and storage space is also available for hire to those in the publishing industry.

“The full service publishing free zone will become a creative hub for those in the industry, or who wish to enter the publishing market, providing a platform for exchange of original ideas and knowledge in a fully supported and integrated environment.”

This year while in Shajrah, Ahmed bin Rakkad Al Ameri, Chairman of the Book Authority — which serves as the umbrella for most publishing activities in Sharjah— gave us his thoughts on the project and where things stand now.

“Sharjah Publishing City [is] going to be the publishing hub of not the Middle East, not just the region, but for the world. It is going to be the hub that brings together publishing, translation, and all aspects of the industry, all together in one location. It is actually 365 days of book fairs in one spot.”

Publishing Perspectives: Where are you now in the run-up to the launch?

Al Ameri: We’ll be launching very soon. Before the year is over, have no doubt.

Publishing Perspectives: Please talk about how your plans to make this a truly global publishing hub.

Publishing Perspectives: Let’s say I’m a publisher from the US and Canada – what can you do for me? Al Ameri: You come and start your business. It’s just that simple. You’ve got all the publishers there from around the world – from India, from France, from the Arab world — a United Nations of publishing in Sharjah Publishing City.

It’s very important logistical connection –we’re located between two airports — Sharjah Cargo airport, the biggest hub for Lufthansa after Frankfurt to connect with China, and Dubai Airport. And it’s 48 kilometers from two main ports, one in Sharjah and one in Dubai. You’re talking about two ports and two airports within 20 miles.

In four weeks we’ll be starting our waiting list, and plan to launch by the end of the year.

Sharjah Publishing City will be the important place in the world for publishers. You know why? First, shipping from China to Sharjah is two weeks. Shipping from Sharjah to anywhere in the world is three weeks. Five weeks total. Shipping from China to New York is 60 days. So you’ll be saving almost 20 days. And when we start our printing, our prices will be comparable with China; and so when you add in the cost of shipping, you’ll be saving even more. No censorship, the only thing not allowed is pornography.