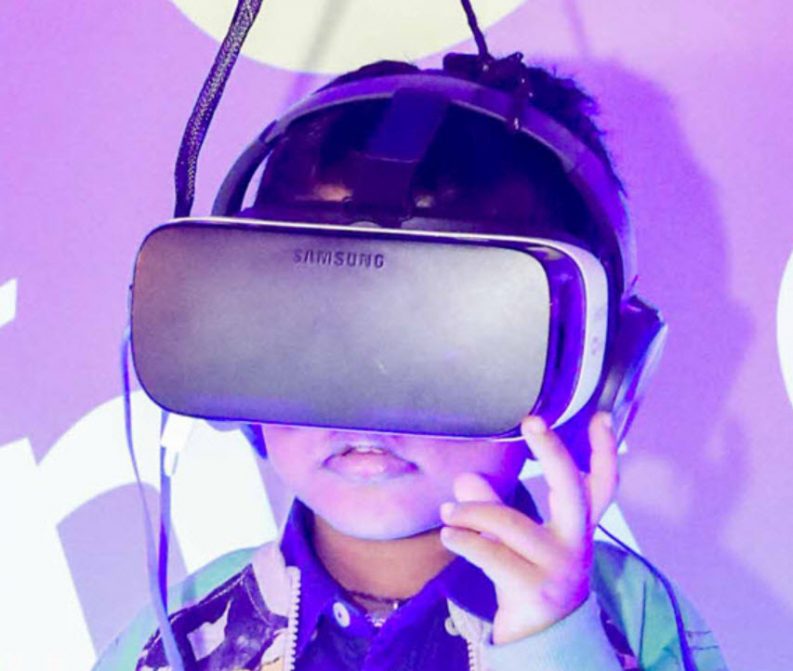 Embracing young people’s pleasure in technology, the Sharjah leadership experiments with a VR presentation of literature for children, based on the the life of the UAE’s founder. ‘We Want Children To Discover the Pleasure of Reading’

A new age of reading has begun in the United Arab Emirates with the launch of the world’s first reality book by the Sharjah Book Authority (SBA). This is part of its campaign to promote the eighth edition of the 2016 Sharjah Children’s Reading Festival.

The SBA selected Baba Zayed – a book originally published by Kalimat – as the first title to be produced using elements of virtual reality technology. The book allows children to learn about the life of the founder of the Emirati federation, Sheikh Zayed bin Sultan Al Nahyan, “renowned as being not just a political leader, but a forward-thinking visionary.”

In his statement, the Chairman of the Authority, Ahmed bin Rakkad Al Ameri,  said: “At Sharjah Book Authority we strive to make the best use of technology to enhance culture and knowledge, especially in its application to children’s literature.

“With the launch of the digital publication Baba Zayed, we are seeking to utilize the latest development in expanding knowledge.

“This technology has been available in world markets for some time, but its uses up until now have been limited to digital games and films.

“This book will be the first of its kind in the world that uses the 3D VR Glasses to enable children to read and at the same time enjoy 360-degree interaction with the story.”

A part of the interest in the Baba Zayed release is to take advantage of many children’s passion for technology. As such, the new offering factors into the Authority’s wider context of instilling in young people a lifelong love of reading.

Al Ameri further connected the project to the vision of Sharjah’s ruler, himself the author of Under the Flag of Occupation (Bloomsbury), launched during the London Book Fair last month.

“The use of digital virtual technology in books is one of the creative ideas that exemplifies the vision of His Highness Sheikh Dr. Sultan bin Muhammad Al Qasimi,” Al Ameri said, “for the importance of nurturing children’s minds with knowledge and intellect. We want children to discover the pleasure of reading and aspire to make use of all means that help achieve this target. In doing so, we hope to contribute to creating an educated generation capable of building itself and serving the nation.”

Al Ameri noted that the late Sheikh Zayed succeeded in achieving a qualitative leap in the history of the UAE.

“We believe in the need for children to learn about Sheikh Zayed, his inspiring traits, his visionary qualities and his passion for knowledge and reading. Through the new virtual reality book, we aim to strengthen national identity among children in the UAE.”