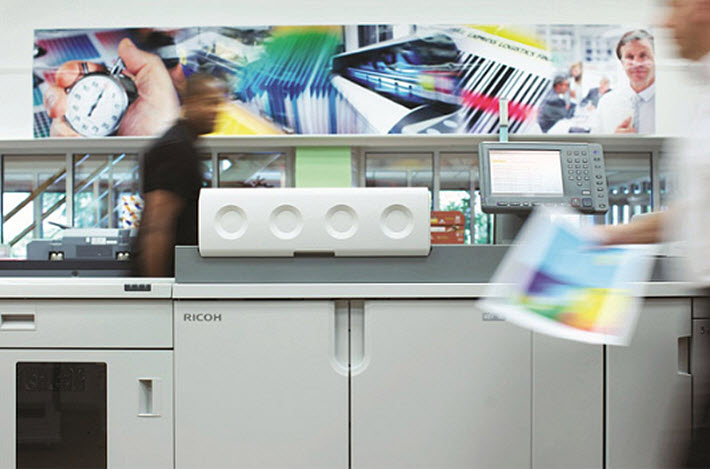 Metadata may not only be how your titles are categorized, tracked, and marketed: It also can tell a printer how to print the book a reader has just ordered from a retailer — and get it out the door. ‘We Knew There Was a Gap’

Prior to working together at Ricoh, Lisa Oakleaf and Erik Fritz had worked together in printing. “We both come from the production side of the print business,” Oakleaf says.

Erik Fritz had worked in technical implementation of new software, looking for challenges in the printing processes and “trying to alleviate the pain points,” as Oakleaf puts it.

“My jobs were more in production management. I managed pre-press, I managed cut-sheet digital, I managed production, and I managed scheduling of work through production. So I’ve been through the whole gamut, getting all the orders that would come in from a publisher, getting them down to the print devices, and and then insuring that they’d flow through the production cycle so we could get them shipped out the door to meet those due times the customer had requested.

“So Erik and I came from the production side very familiar with what the printers faced in trying to get the orders organized.”

“This meant that we knew, coming into Ricoh, that there was a gap in being able to organize all the orders in a fashion that made the most sense in how they would be produced.

“Erik came up with the idea of creating a software that would allow these printers to be able to use the metadata they already had. The EDI (electronic data interchange) orders that might be coming in and populating the information in an MIS (management information system), all of this metadata — such as the order quantity, what type of paper needs to be used, when it’s due, how the product needs to be finished — all of that was included in the metadata. But it usually just stopped.

“We wanted to create a way to be able to use that metadata to organize the work.”

“The metadata — such as the due time and the media, the finishing requirements — all of that can be used to filter the orders coming in and organize them into batches of work.”Lisa Oakleaf

What Oakleaf is talking about from Ricoh in Boulder, Colorado, is something we don’t hear about as much as we probably should. Digital publishing is something we discuss in and around the books industry day and night. But digital printing runs on a nearby but parallel track, just outside the periphery of many industry folks’ day-to-day interests.

Ricoh is among several leading companies in the field with key personnel looking for ways to make a whole range of issues in digital printing come together as a viable, contemporary answer to the old offset printing modes.

Today, Oakleaf and Fritz are senior product managers with Ricoh, his emphasis still on software, hers on production. And Oakleaf is describing how the two of them came to create what’s branded as TotalFlow BatchBuilder — a software context for print jobs that can accesses the guidance embedded in an order’s metadata and utilize that information to automate everything from job ticketing and scheduling to routing and finishing processes.

Here’s a quick promotional video the company has produced to explain how BatchBuilder can support the short-run environment:

If you’re a printer, you know exactly what the issue is. In a Ricoh Executive Publishing Symposium in Boulder earlier this spring, Ricoh’s staff heard printers and publishers talk about the rise in one-offs and short-runs. Big printing systems that produce books in legacy offset technology are in trouble with the kind of lightweight, quick-turn orders that are frequently referred to as POD.

Printing people are facing a record level of short-run orders as the supply chain lightens up, warehousing contracts, and online ordering moves with the speed of the ether.

Ricoh is responding is with newly upgraded quality in four-color inkjet technology. We’re still talking about an awfully big chunk of machinery — the Ricoh Pro C9100 Series looks like a high-tech submarine standing in the middle of the room — but this is actually a big step forward in the printing world, and some specialists talk quietly about a day coming when a major publisher would have its own offset rig available. Chances are, something like Oakleaf and Fritz’s BatchBuilder would be needed to handle the orders flying in and out for quick, low-count order fulfillment.

“When all the information of your order comes in,” Oakleaf tells us, “we can take that metadata, map it into our system, so an order can automatically be created in BatchBuilder.

“And then that metadata—such as the due time and the media, the finishing requirements — all of that can be used in BatchBuilder to filter the orders coming in and organize them into batches of work.”

Typically, anything you might call a batch builder is a person. The traditional process is for someone to look at every order manually and try to sort and group the various jobs for the most expedient use of paper (which arrives on rolls the size of a teenager), and so on.

“If you’re producing books,” and you have different size books or manuals or journals, different finishing styles, some covers might need UV coating — the whole goal is to organize the batches of work so you don’t have to go back and forth between your setups.” The load of workflow organization, in other words, is eased for print operators and carried by this software which, in theory, may have a better chance of matching up the variables of a day’s orders for the most efficient production than a human might.

“Whether it’s inline or offline finishing, this gives the printer the ability to organize their work in the way that makes the most sense.” Rush orders, devices going offline, any number of things can make the print environment quickly changeable. Automated batch management, according to Oakleaf and her associates, can give the print staff the capability to adjust and keep moving.

“Especially for the larger printers, the person who batches the work is a full-time job. It takes a lot of time to review all the data on a job and be able to say, ‘I want to group all this work because it’s at the same time, or I want to use this roll of paper, or my cut-sheet device has another paper loaded in its door anyway, so I want to produce a batch of work to take advantage of it.’

“Basically, this really puts the load onto the software. The software doesn’t talk to the devices — it won’t know what paper is loaded, for example.” But by having multiple filters in place the operators can have BatchBuilder sort incoming jobs by several criteria (time due, binder, etc.) and make the most of the machinery’s operation.

“We’ve had a very large book printer use this software and their pre-press department dumps its XML feed into a designated folder for BatchBuilder which monitors the system” for new orders,” says Oakleaf. And before this, they’d been taking job tickets and putting them into the cardboard holders from the tops of the cases of paper, cardboard hoppers, so those where their batches of work. It was so time-consuming. They eliminated that process and freed up one worker entirely to take a new position they’d opened.”

“We wanted to create a way to be able to use that metadata to organize the work.”Lisa Oakleaf

“We knew, too, that BatchBuilder is going to be used in environments that aren’t all Ricoh. You might have HP, Canon, Xerox on the floor. So it’s a matter of making BatchBuilder as flexible and open as possible.”

Clearly, there’s competition out there and we’ll be talking to reps from it in the future. For now, Oakleaf is pleased to find that the several instances of BatchBuilder’s implementation in place so far are living up to what she and Fritz wanted.

“You’re taking advantage of the available data,” she says. “On the publisher side as well on the printer side, we want to help fill in the gap between order-entry and printing.”