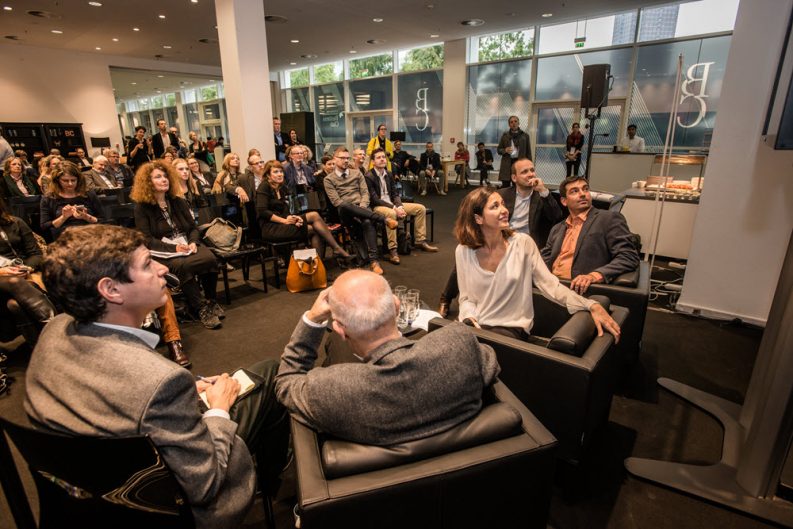 Business, the arts, and ambassadors: Dispatches from Frankfurt Book Fair focus on a new cultural marketplace, Guests of Honour, and the Business Club. ‘One of the Largest Cultural Events in Europe’

Last week, as many of us were trekking the wide-open prairie of BookExpo America in Chicago’s vast McCormick Place, we were reminded by pings on our smartphones that the year’s biggest of all trade shows still awaits. Trade-show-to-trade-show messages were arriving from Germany about this year’s FBM and beyond.

Here’s a quick recap, in case any news releases got by you. Christiane zu Salm (Christiane Kofler) and her corporation About Change GmbH are working with Frankfurt Buchmesse to create an inaugural marketplace “for cultural and creative content,” as Frankfurt Vice President Holder Volland puts it.

Kofler is a bestselling author, an art collector, the former Managing Director of MTV Central Europe, and one of the World Economic Forum’s Global Leaders for Tomorrow, the 2002 class. This year, she has become the owner of the venerable publishing House Nicolai Verlag. In her writings, she is a specialist in grief and the end of life, the inspiration for her book, Dieser Mensch war ich (The Man I Was).

“Frankfurt Book Fair is one of the world’s most important content trade fairs,” Volland says, “and one of the largest cultural events in Europe.

“It makes sense to build on this foundation.” Set in Hall 4.1, the new trade fair and conference is expected to encompass some 1,500 square meters of space and is to feature a curated exhibition area along with a stage, labs, workshops, and a salon.

“Content is already an important field of activity for cultural institutions and creative professionals,” Kofler says in a prepared statement announcing the new development.

An early site is in place relative to THE ARTS+ and in the text there, we read of plans that include “a global think tank for the creative society.”

The initiative is described, in part, this way:

“Professionals from all areas of culture and the creative scene, brands, developers, publishers, technology companies and media representatives will meet in Frankfurt to share ideas through presentations, exhibitions, a laboratory, workshops and conferences, creating a unique new network.”

The popular Business Club program at Frankfurt — which drew 3,200 guests from some 50 countries last year — is a professionally designed and operated setting for meetings, special events, and the key conference, The Markets: Global Publishing Summit.

As is so frequently the case, word-of-mouth is the best way to amplify the news about the still-young Business Club (this will be its third year), and organizers are interested in hearing from those who might like a six-day complimentary trade visitor business ticket in exchange for keeping colleagues and associates informed of plans for this year’s program.

You can learn more and find an application form here.

2019: Norway is Guest of Honour at Frankfurt Book Fair

Not this year. It’s Flanders and The Netherlands in October, and the region is part of The Markets conference focus, as well. “With Norway, we are already announcing our fourth future Guest of Honour. This shows that Frankfurt Book Fair will remain the relevant stage for literary and cultural content in future. I’m looking forward to Norway as a country with a long literary tradition that stretches back to the world-renowned Henrik Ibsen and to the charismatic and relentless Karl Ove Knausgård, who is currently taking the literary world by surprise.”

Margit Walsø, Director of NORLA, The Centre for Norwegian Literature Abroad, confirmed the plan in a ceremony at Oslo last Thursday (May 12) at the National Theater.

And impress your friends with your knowledge of which countries are to be featured between this year’s Flemish and Dutch focus and 2019’s Norwegian celebration:

More on the Guest of Honour program is here.