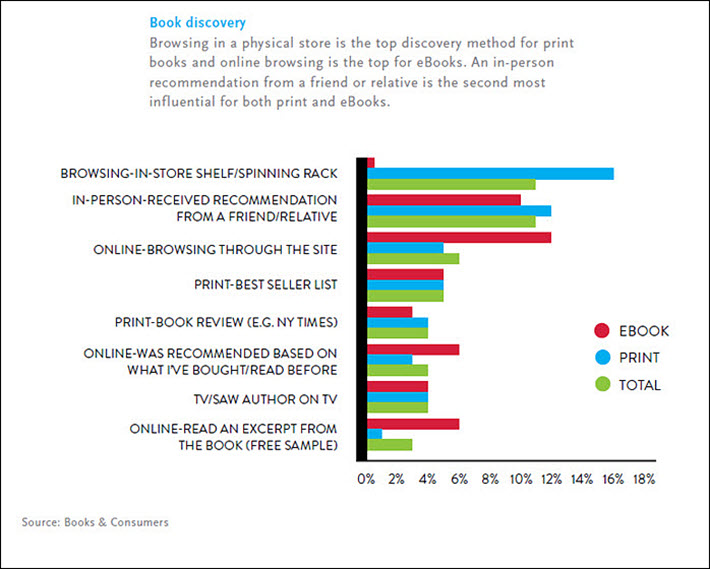 Who’s buying the books? How are they finding them? Who’s coloring them? Here are a few glimpses from Nielsen’s 2015 research.

Two From the UK, Two from the US

In our conversation today (May 26) with INscribe’s Larry Norton, he mentions a chart from Nielsen that indicates a shift in ebook market share in the US.

That chart is part of a 55-page report distributed this week to delegates to the London Book Fair’s Quantum Conference of mid-March.

In giving you a few looks at information from Nielsen’s 2015 Book Research in Review report, let’s start with that chart Norton refers to about market share. From Nielsen Books & Consumers US

As INscribe’s Larry Norton points out, the above graphic from Nielsen indicates a shift in ebook share in the US market indicates a four-year pattern that sees the Big Five publishers’ digital presence go from 46 percent in 2012 to 34 percent in 2015. Self-published and “very small publishers'” titles in the same time period go from 19 percent of the market in 2012 to 42 percent of the market in 2015. In the above interesting chart, there appears to be more parity than might have been expected in the male-female comparison of UK book buyers (measured as percentage of volume). For both genders, the largest percentage of volume is bought at ages 45 to 59 (11.1 percent for women, 10.6 percent for men). Men actually outpace women in the 35-to-44-year bracket (men at 9.5 percent, women at 8.6 percent). From the US, the above chart indicates, of course, that in-store browsing is the leading mode of discovery in print books (the blue) and online browsing is the key mode in ebooks (red). What’s interesting here is that the second mode of discovery, “in-person-received recommendation from a a friend or relative”—generally termed word-of-mouth—seems to be somewhat less effective for ebooks than for print books. And from Nielsen’s UK research, an interesting glimpse into all this adult coloring book action. Buyers are represented on the left, users—colorists, as it were—are on the right. You notice first that there are more 13-to-24-year-olds coloring than buying (32.9 percent coloring, 21.2 percent buying).

The biggest users, however, the colorists, are 46 to 59 years old (19.9 percent). The folks least into coloring (10 percent) are between 35 and 44, probably busy trying to feed and clothe the colorists in the family.

In gender comparisons, women lead in buying adult coloring books (57.4 percent) as they do in buying regular books. It’s in the user column that we see the female set doing the heaviest lifting: they’re almost 80 percent of the people coloring (or admitting to it). Only 20.2 percent of the men are reported to be hoisting the Crayons.