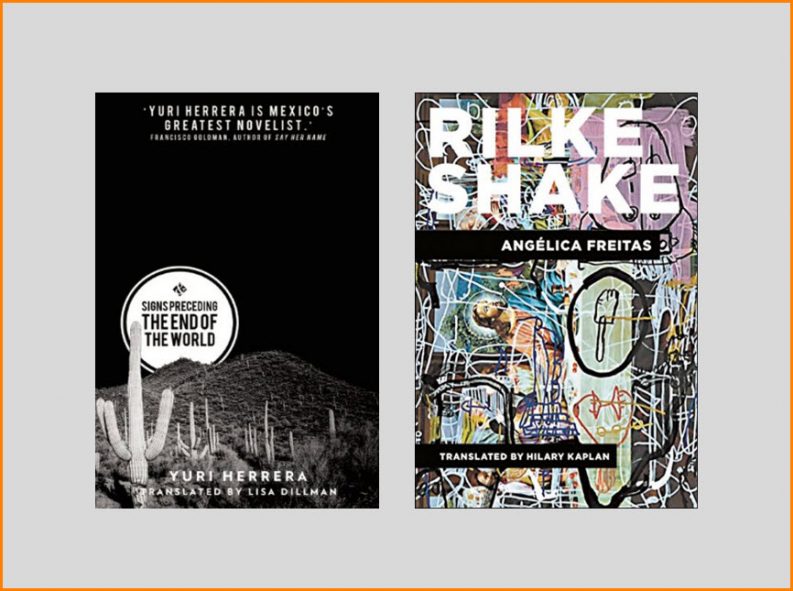 Funded by the Amazon Literary Partnership, the Best Translated Book Award gives $5,000 to each winning author and translator, and is administered by Chad W. Post of the literary site Three Percent and Open Letter, a nonprofit literary press.

Fiction and Poetry, a Longlist of 35, Shortlist of 16 The ninth annual presentation of the Best Translated Book Awards (BTBA) has been made on Wednesday evening (May 4) and features:

The poetry win for Freitas and Kaplan gives Los Angeles’ Phoneme Media the distinction of being the first publisher to win in back-to-back years, and translator Kaplan also received a PEN/Heim Translation Award in support of her work on the project. The publisher of the Herrera novel is & Other Stories, operating from North America and the UK.

A simultaneous announcement of the awards was made at The Folly in New York City, and online at TheMillions.com Wednesday evening.

Each winning author and translator receives a $5,000 cash prize for a fifth year, thanks to the Amazon Literary Partnership grant program originated by media consultant Jon Fine (who speaks next week at BookExpo America) and ably administered today by Neal Thompson, an author himself, and Amazon’s Director of Author and Publishing Relations. The prize is administered with admirable zeal by Chad W. Post (also speaking at BEA) through his Three Percent project based at the University of Rochester.

With a 35-title longlist (both for fiction and poetry), the prize’s shortlist comprised 10 works of fiction and six poetry collections.

One of the most useful elements of this competition is Post’s gratifying compendium of “Why This Book Should Win” articles, one for each of the 35 longlisted works.

We can draw on that material for some information about the winning titles.

Signs Preceding the End of the World In his “Why This Book Should Win” essay, bookseller and former BTBA judge Stephen Sparks writes, in part:

“Signs Preceding the End of the World tells the story of a young switchboard operator’s harrowing attempt to cross a border between worlds—Mexico and the United States, but also between reality and myth, between the living and the dead, between any here and distantthere—in search of her brother, who like uncountable others before him has gone north to seek out a better life…

“A story like this already has a certain weight borrowed from the contemporary situation on the Mexico-US border, but Herrera ballasts his novel with myth, a decision that imbues the work with an almost vertiginous depth that resounds with echoes of the ancient past. [The protagonist] Makina’s journey is, in fact, based on pre-Hispanic myths of the underworld…

“Signs Preceding the End of the World stands on its own as an estimable work of fiction. It doesn’t need the backdrop of the current political firestorm raging over the US-Mexico border or the influx of Syrian refugees into Europe to prove its value—as long as there are borders, there will be injustice—but the fact that it so clearly and powerfully speaks to the state of migrants today renders it all the more powerful. I can think of no better reason for a book to win the Best Translated Book Award than this.” In her “Why This Book Should Win” commentary, BTBA judge and translator Tess Lewis writes, in part:

“In Rilke Shake, the Brazilian poet, Angélica Freitas, whips up a powerful tonic for even the most stubborn case of anxiety of influence: one cup Rilke, a pinch Gertrude Stein (farting in the tub), two tablespoons Poundian cadences, a dash of Marianne Moore, and toasted Blake, with five hundred hollygolightlies thrown in for good measure, the whole lot shaken not stirred…

“Freitas’ antic irreverence and exuberant poetic license are contagious but don’t come at the expense of depth. Even as she “smooth[es] the rough edges of farce,” life’s sharper blades intrude in her poems as heartbreak, poverty, loneliness, depression…

“Translator Hilary Kaplan won a PEN/Heim Translation Fund Grant to translate these poems. She has done the grant and Freitas’ poems justice, capturing the many shifts in tone in and between the lines, from playful to wry to sardonic to pathetic, even sentimental, to deadpan and back to playful, sometimes within a single poem.”

The complete longlist and “Why This Book Should Win” rationales is here at Post’s Three Percent site. You can also hear the Three Percent Podcast there and follow Post’s coverage of the translation scene.

During BookExpo America (BEA), a Best Translated Book Awards party is scheduled for 5 to 6:30 p.m. May 11 at 57th Street Books in Chicago. The event is open free of charge to the public.

Publishing Perspectives encourages you to remember to #namethetranslator whenever talking about translated literature.