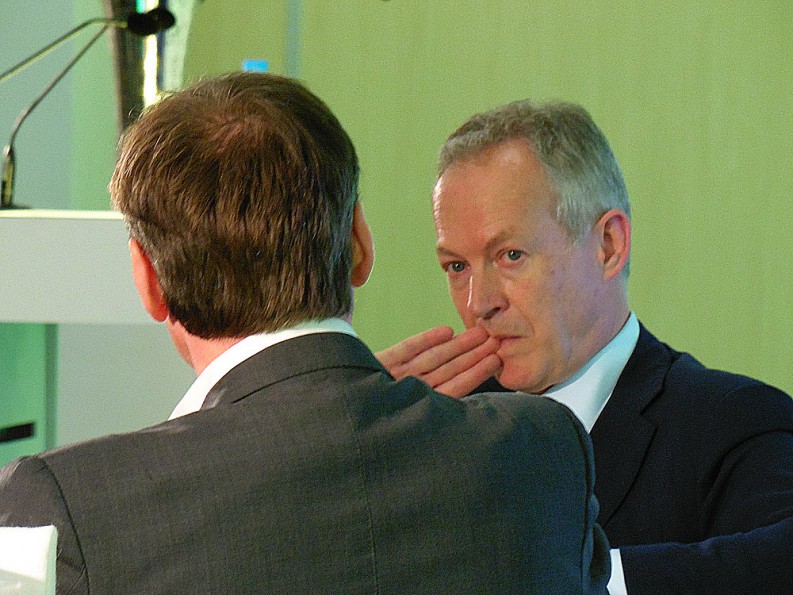 Beloved of aging stage actors, the “amber gels” were firmly on the lighting Monday, as the publishing industry took a soft-focus look at itself in the digital mirror.

Having begun London Book Fair’s long week on Sunday with the impressive International Publishers Association’s (IPA) 31st Congress, it was the Fair’s turn to stage its annual conference on Monday, under the deft direction again this year of Orna O’Brien.

And where the day found its centerpiece was right after lunch in an illuminating conversation onstage between two of the most distinctive players in UK publishing today.

Stephen Page is the highly articulate publisher of Faber & Faber, one of the great independent houses of London.

James Daunt is the Managing Director of Waterstones, and he is credited with turning around the bookselling chain to a point near the black — “chasing profitability,” as Open Road Integrated Media’s Jane Friedman likes to put it.

Together, Page and Daunt positioned the day’s determinedly upbeat vibe in a gratifyingly frank exchange, managing to stay within the bounds of the event’s overall air of cautious optimism.

After the session, Page told me — laughing, mind you — that he’d wanted to punch Daunt at least once during the interview. And that point might have been (this is my interpretation, not his) when Daunt spoke of publishers being unsupportive of Waterstones in the 2010/2011 period. That brief reference from Waterstones’ man of the hour to a time when the industry, he said, was willing to see Waterstones “fail,” went by unexamined, punch pulled, chance missed.

But as I told Page, the earnest give-and-take of the conversation was welcome, thoughtful, and frequently, apparently, quite candid: good to hear and see.

An extended part of the conversation, to both men’s credit, dealt with the question of Amazon’s looming presence on the scene. Far too frequently, the topic is avoided. It was good to hear Daunt so straightforwardly tell Page and their audience that “we’re 25 percent more expensive than Amazon” to a customer. What’s more, he pointed out, he must try to find astute bookselling talent as a minimum-wage employer. This is the brick-and-mortar reality of the UK’s biggest chain bookseller, and Daunt was refreshingly earnest about the “complete fantasy” of trying to compete digitally with Amazon: “I don’t think we have the ability to respond wholly effectively to Amazon.

“The investment needed to match the logistics and pricing would be enormous; the idea that as an online retailer idea we can match Amazon is complete fantasy.

“There’s absolutely no future in that, but as physical bookseller, with a decent and credible online offering, could we offer an alternative that customers can logically and emotionally choose? Yes.

“Amazon is our competition. If you know what you want to read you’ll go online and buy it —it’s efficient and easy. Our shops are about the experience and the discovery of books.”

How many times have we heard lesser lights go on about an intent to “beat Amazon at its own game”? Daunt is far too good for that. He knows better and says better.

And “addictive” is a word to hang onto here. It’s one that Daunt used frequently in describing how he sees the allure of the physical shopping context. He’s going for the power of habit.

For his part, Page didn’t shy from pointing out how uneasy smart people can be around the kind of talk we heard most of the day on Monday — of a new “confidence” for publishing, partly predicated on the idea of a “print resurgence,” which in the States, at least, is thought by many to be primarily an effect of adult coloring books’ probably temporary trendiness, albeit less so in the UK. “Going on the big-picture future,” Page said — frequently a voice of reasonable concern in the community. “You say you feel ‘confident’ now…[but such commentary] always worries me, a certain complacency about the future.

“These things are true now, particularly if you look at how we’ve navigated the ebook transformation.

“But this is a first step. When you look ahead at the industry, say three to five years, how much do you feel you can say, ‘Actually, I feel we’ve made some good calls and I see it being a manageable trajectory from here out’?”

Page’s question had the desired effect. It elicited from a thoughtful Daunt this belief he has in the ability of an “addictive” quality of physical shopping to prevail, even in the face of the digital (read Amazonian) onslaught.

“My experience over more than 25 years,” Daunt said, “is that that if you put a really good bookshop in front of people, that it’s addictive.”

In several other moments, Daunt had been generously clear, too, that he’s not without admiration for how Amazon’s first physical bookstore in Seattle has achieved a very different evocation of the physical shopping experience (tightly tied to the online basis of the company, of course) to great effect “from a customer perspective” but that the Amazon Books model “contravenes everything I know” of physical-store selling.

And Daunt made a point of talking of what he sees as an abiding and even reviving pleasure in physical shopping among UK consumers: “In a country of shopping as a leisure activity,” he said, “people want to go to shops. I think we’re going to be fine.”

‘I Think We’re Going To Be Fine’

What made the two men’s discussion so interesting Monday is that worked like a snow globe’s microcosm of the day’s overall messaging. Daunt had captured it right here: “I think we’re going to be fine.”

It’s perfectly understandable that this is what the industry wants to hear, especially at the first great trade show of the year. Not for nothing do most industries rally their workforces’ spirits with cheery assessments of how things will go.

And no one wants to see publishing (let alone Waterstones) be anything but “fine,” of course.

But is this a realistic assessment, and is it helpful when serious challenges of too much output and too little readership dog publishing with quietly growing persistence?

Not unlike Hachette’s Arnaud Nourry in his remarks Sunday to the IPA conference, many onstage Monday seemed to be wearing their best game faces.

Baroness Gail Rebuck — whose well-turned 3,000-word commentary you can read here in full — had arrived, primed to tell the gathering that the book, like the proverbial kids, are alright.

Even while noting that only “one in 10 writers can afford to live from writing alone” and that “reading has to fight for its space” amid other entertainment distractions, Rebuck said: “Back in 2010 at a lunch for authors and journalists in Sydney, Australia, we were heatedly discussing the threat of increased online activity such as digital gaming on young minds.

“One of the people present, David Malouf, a wonderful writer and a gentle friend, merely said, ‘Gail, you worry too much.  We all adapt. The author and the book will survive.’

“For all the curious incidents I’ve seen in our industry since my days at the London College of Printing, the most curious — but the least surprising of all — is that the power of the book and the importance of the author haven’t changed at all.”

The Commercial and the Constructive

One of the hardest parts of programming conferences is bringing together those who are working in interesting responses to the industry’s realities but without having their conversations sound like advertorials.

If a panel on audio publishing failed in this regard — and a conversation on Virtual Reality sounded a bit premature — there still were good moments to be had, particularly in an afternoon session on young-adult publishing.

Nielsen’s Jo Henry had reported (in a fine précis perfectly placed by O’Brien early in the day) that the “YA phenomenon has almost completely dried up” in the US market, as the big round of blockbuster hits such as The Hunger Games series played through. The Quantum Conference YA panel

But here were author Deirdre Sullivan; Tammi’s Saara Tiuraniemi of Finland; Penguin Random House’s Asseotou Ngom; and the mighty Wattpad’s Ashleigh Gardner speaking together of how abiding is the need-to-know impulse for young readers is such a dependable peg. Coming-of-age stories, like the experience itself, are all but unavoidable, especially in an era in which so much attention is placed on the aging Baby Boom generational spectrum that younger citizens can feel unsupported.

No need to look any farther than an audience member’s question about whether YA isn’t severely slanted toward female readers to understand how earnest and important the discussion was. In an era in which publishing needs nothing more than new readers, the industry continues to shrug at the dearth of male readership and to serve the female customer base first and foremost.

Gardner was able to point out that Wattpad is unusual with some 30 percent of its vast monthly user base of more than 40 million people being male.

“This is slightly higher than the traditional book-spending [population] skews,” Gardner said. And she described material focused on modern urban technology as being particularly good at drawing a male readership and writing cohort.

“Young men,” she said, “are interested in reading and writing.”

That is a line that I wish we’d heard on the mainstage and earlier in the day, not later. If there’s anything publishing needs to find today, it’s the way toward a wider, deeper consumer base, for Daunt’s stores, for Page’s books, even for Jeff Bezos’ sales online. The largely untapped male readership is something that remains stubbornly outside the purview of too much of the publishing world today, money left on the table, minds left to their own (electronic) devices. The Quantum Conference began the day with Oxford professor and Artificial Intelligence prophet Nick Bostrom on what he believes could be the dangers of machine intelligence in the longer-term development of technology’s power.

While it was great to see Bostrom at the podium, his personal delivery of some of his thesis had nothing like the teeth that his published thoughts on the issues have. Missing was much of that dangerous feel. Instead, there was a kind of patient dismissal of “crazy sci-fi-stuff” that actually can have real potential for eventual manifestation, he said…but not soon.

“The rise of machine intelligence,” Bostrom told us “may be even more profound than the industrial revolution.”

And then, we moved on.

“I think we’re going to be fine,” Daunt would soon be telling us. And on the eve of London Book Fair 2016, everyone in the room seemed content to leave it there.

For more from the Quantum Conference, see Alastair Horne’s report on the Quantum Publishing Innovation Awards.