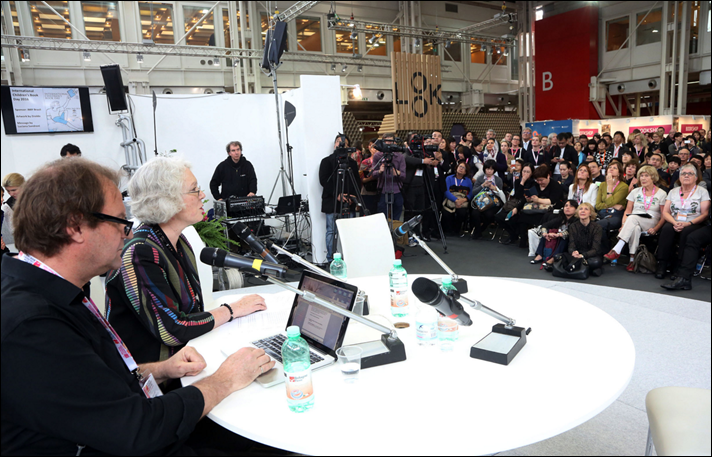 At the opening of this year’s Bologna Children’s Book Fair (#BCBF16), the International Board on Books for Young People has announced that illustrator Rotraut Susanne Berner of Germany and writer Cao Wenxuan of China are winners of the 2016 Hans Christian Andersen Award, considered by some the “children’s Nobel.”

In the announcement, it was said of Berner’s work: It “is at all times recognizably hers, while simultaneously being intensely responsive to the demands of the text…She is willing to take risks – The Princess Will Arrive at Four is a brilliant example of this, as it the fairytale comic book, Definitely Not for the Little Ones, and When Death Came for a Visit, written by Jürg Schubiger. Her books can be hilariously funny, and equally deeply moving. And she doesn’t fear showing life’s dark moments.

“The Wimmel Books are an exemplar of how to construct an elaborate and complex world filled with small important narratives that can engage the viewer for hours through purely visual story telling power. Berner never talks down to her audience and yet her books are unmistakably for children. Children all over the world deserve to be exposed to her brilliant, humane, rich, emotionally true and deeply engaging books.”

And Cao Wenxuan, who was the jury’s unanimous choice for the award, was praised for his ability to write: “He is a deeply committed writer, whose own difficult childhood has been deeply influential on his writing in which there are no easy answers. In Bronze and Sunflower, a novel set during the time of the Cultural Revolution in a rural Chinese village close to a re-education center for people sent from the city, a village boy who does not speak and a little city girl who ends up coming to live with his family can be said to “save” each other. These children are entirely convincing and we care deeply about their fate. In Cao’s Dingding Dangdang series we are captivated and moved by two brothers with Down syndrome who separately flee their village and then search for each other through a world that is alternately loving and rejecting. These books take risks and have a great deal at stake.

“Cao Wenxuan’s books don’t lie about the human condition; they acknowledge that life can often be tragic and that children can suffer. At the same time, they can love and be redeemed by their human qualities and the kindness they sometimes find when they are most in need.

“Cao’s writing about the natural world is lyrical and beautiful. And Cao is a great example of how writing wonderful prose and telling stories about brave children facing tremendous difficulties and challenges can attract a very wide and committed child readership as well as helping to shape a literary tradition in China that honors the realities of children’s worlds.”

With regards to the winners of the IBBY-Asahi Reading Promotion Awards, the announcement said of Iran’s Read With Me: “Read With Me has the objective of making quality books accessible to disadvantaged children in marginal areas of big cities and those living in remote and deprived areas of Iran. The project, nominated by IBBY Iran, provides books and focuses on reading aloud to create a meaningful experience for children; it introduces related art and craft activities, with an emphasis on role-playing and drama as part of reading sessions; it empowers teachers, librarians and volunteers through training workshops and regular mentoring and, as the final phase, it sets up small libraries to ensure sustainability of the work already done.

“The target groups for this project are children, both boys and girls, from preschool to 16 year olds who are generally at risk because of their living environment. These include street or working children, orphans and those living in remote and deprived areas in Iran. The project is designed to be flexible so that it can be implemented at home, at school, at the library or any place in the community.

“The content of the project is socially and culturally adaptable to the needs of different target areas. Since 2010, Read With Me has extended to 13 provinces in Iran, including 15 city centers, 6 marginal areas and 75 remote villages. By 2015 it had reached over 13,000 children in the age group 4-16 and more than 500 teachers, preschool tutors and volunteers have been trained through this project. The project is funded by donations and mainly run by volunteers.”

And of Big Brother Mouse: “Traditionally, books have been rare in Laos. Although the number of children who go to school is slowly but steadily increasing, many children have never read a book outside of school textbooks. Few Lao people think that reading can be fun, can add to their education, or will provide information to improve their quality of life. Very few books are published in Laos, and they never reach the villages where most people live.

“Many Lao children leave school very early as they are needed to help the family to survive, thus their education is very basic. Big Brother Mouse is based in Luang Prabang and Vientiane and all the planning and decisions are made in Laos, based on and often adapting to the conditions that are faced there. The first books were made in 2006. Some are just in Lao; others are in both Lao and English, making them useful not only for the primary audience – Lao children – but also for people of any age, who speak either English or Lao, and are learning the other language.

“The project aims to give books, especially children’s books, an important place in Laos as well as make sure that children in rural areas have access to books. They believe that every child should have the possibility to read and enjoy books and that this is important in helping promote reading and fighting against the widespread illiteracy, still found in Laos.”