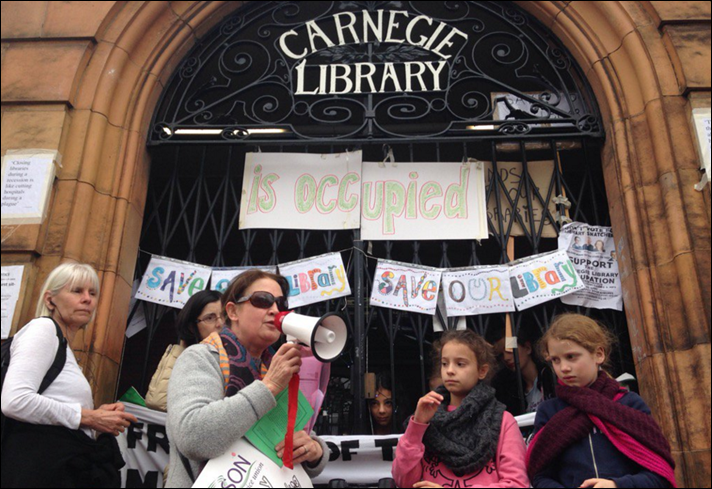 According to a recent BBC report, some 15,000 volunteers have been recruited to run UK libraries that have lost their paid staffers. A standoff in south London throws a spotlight on the situation. This image of closure-protest activities at Herne HIll’s Carnegie Library in the UK was tweeted April 4 by Paula Peters, @PaulaPeters2.

For many outside the United Kingdom, it’s hard to understand how the land of Shakespeare and the Shelleys can possibly be closing libraries. The BBC’s assessment of the situation, out less than a week ago, cites 343 UK libraries closed; the government’s estimate is 110. Either way, something has gone wrong when a nation of such literary magnitude watches a reported 25 percent of its library jobs disappear in six years’ time. In the case of London’s Herne Hill protest, it’s anticipated that a court order will be sought to evict the demonstrators. And we’ve asked Alastair Horne to give us some background. — Porter Anderson

‘A Step Too Far’ From a Library’s Mission

The Carnegie Library at Herne Hill in south London may seem an unlikely front line for a revolution. Named after the Scottish-American steel magnate-philanthropist — whose contribution of £12,500 ensured its foundation more than 100 years ago — the library’s greatest historical contribution until now had been its open stacks, revolutionary in 1906, which allowed readers to find their own books rather than asking for librarians to fetch them.

And yet today Carnegie Library finds itself at the forefront of a conflict that is pitting British readers, young and old, against its elected local government officials. Last Thursday (March 31) at 6 p.m., the library was set to close its doors for the final time, before reopening next year as a privately-run gym, or, in the terminology of the local Lambeth Council, a “healthy living center.” The new entity would offer what the council has described as a “some library services”: access to books, but without any dedicated staff or support — a step too far, perhaps, from that innovative 1906 design.

In response to Carnegie Library’s occupation, Herne Hill’s Lambeth Council says its intentions are being misrepresented and that it is one of the few local councils that has found “a way to maintain a library service in all our current locations.”Natasha Onwuemezi, The Bookseller

Instead of closing, however, Carnegie Library has for the past three nights been occupied by a group of 40 or so campaigners – including a grandmother and her granddaughters – peacefully protesting the decision to downgrade the library. On Twitter, you can follow #CarnegieLibrary for some of the social-media coverage of the event.

The Carnegie shares its plight along with at least three of nine other facilities run by Lambeth Council. Like any revolution these days, various social media have proved a lively battleground, with campaigners posting videos outlining their positions and decision to protest, photos of communal meals, and games of chess with local policemen, alongside sharp exchanges between library supporters and local council members.

The libraries of Lambeth are far from alone in facing an uncertain future. Nic Fildes, @NicFildes, tweeted this image on March 31 of police speaking with protesters at the Herne Hill Carnegie Library in south London.

Andrew Carnegie helped create a golden age of British libraries around the turn of the last century, contributing to the building of more than 660 libraries in the UK alone between 1883 and his death in 1919. The past six years have, however, seen a major retrenchment, with the closures of many libraries.

That BBC report indicates that “174 libraries have been transferred to community groups, while 50 have been handed to external organizations to run.” The report estimates that close to 8,000 library jobs have been lost so far, leaving libraries more dependent than ever on the work of volunteers.

How has it come to this? Why is a country with the world’s fifth largest economy closing so many of its libraries?

The answer lies in the way that Britain’s libraries — and ultimately the councils that run them — are funded.

Since the 2010 election, that funding has been cut by 30 percent, as the ruling Conservative party — at first in partnership with the Liberal Democrats, and since 2015 on its own — has introduced austerity measures to reduce government spending in a bid either to “get Britain back to living within its means,” in the words of UK Prime Minister David Cameron, or as part of an ideological drive to shrink the state, in the view of his critics.

Herne Hill Carnegie Library’s greatest historical contribution until now has been its open stacks, revolutionary in 1906, which allowed readers to find their own books rather than asking for librarians to fetch them.

Whatever the motive, cutting local government funding has proved a controversial move politically, as local councils – many run by the Conservatives’ opponents — find themselves forced to make unpopular choices about which services to cut, and taking most of the blame. Lambeth’s Labour councilors, for instance, have defended their library decisions by insisting on the need to safeguard funding for child protection and care for the “sick, elderly, and dying“ while critics dismiss them as “Tory-lite.”

Indeed, Lambeth Council’s spokesperson is quoted by The Bookseller’s Natasha Onwuemezi as saying that the new plan for the “healthy living center” is “a way to maintain a library service in all our current locations. The building will re-open to the public, for longer hours, in early 2017 and will have a neighborhood library service, health and fitness facilities and space for community groups to use. Manjinder Virk, @manjinder_virk, tweeted this image from the Herne Hill protest on April 3.

“It is unfortunate,” the council’s spokesperson says, “that a small number of people have decided to be obstructive, especially as Lambeth Council has worked incredibly hard to minimise the impact of the cuts on Lambeth libraries.”

But even if there’s a resolution of some sort ahead in the case of the Carnegie at Herne Hill, with more cuts to come — 7 percent anticipated in the next few years — library services in the UK are likely to come under further threat.

Lancaster, faced with cuts of £65 million over the next two years, and £200 million by 2020, is reported by Sam Jordison at The Guardian to be planning to close 40 libraries, and five museums.

Even libraries not run by the state are affected: London’s Feminist Library is facing eviction from its home in Southwark as the local council insists that it must charge a market rent for the premises it occupies.

The campaigners at Lambeth’s Carnegie Library — however things may conclude in their show of resistance — are unlikely to be the last to protest.